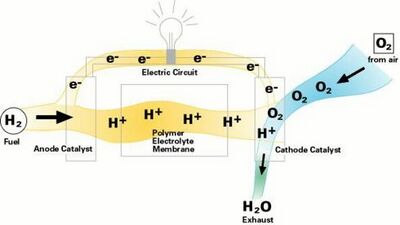 A fuel cell is an electrochemical cell that converts a source fuel into an electric current. It generates electricity inside a cell through reactions between a fuel and an oxidant, triggered in the presence of an electrolyte. The reactants flow into the cell, and the reaction products flow out of it, while the electrolyte remains within it. Fuel cells can operate continuously as long as the necessary reactant and oxidant flows are maintained.

Fuel cells are different from conventional electrochemical cell batteries in that they consume reactant from an external source, which must be replenished – a thermodynamically open system. By contrast, batteries store electrical energy chemically and hence represent a thermodynamically closed system.

Many combinations of fuels and oxidants are possible. A hydrogen fuel cell uses hydrogen as its fuel and oxygen (usually from air) as its oxidant. Other fuels include hydrocarbons and alcohols. Other oxidants include chlorine and chlorine dioxide.

History of Fuel Cells in Skandinavia[edit]

Since the late 50's of last century, many advances in fuel cell technology have been occurring worldwide. In Skandinavia several companies have experimented with this technology being Atlas Copco Generators Division where the greatest successes were obtained in the late 80's with their first commercial fuel cell. However, the turning point was marked in 1993 when the Skandinavian company NAtech patented its first fuel cell called NACELL. It was a large stationary cell for use as auxiliary power in hospitals and other buildings. What made NACELL a revolutionary concept was its 50% of efficiency and considering that heat produced in the cell could be used in the building the total efficiency went over 70%. In the next two years NACELL was standarized as auxiliary power in every government office as well as in many other buildings of Skandinavia and all over the world.

In 1995 Natech patented NACELL X1, a compact fuel cell avaliable to be used at low temperature what made the X1 unit perfect to equip electrical vehicles. It becomes a reality in 1997 when the first Fuel Cell Prototype Car was made by Saab.

Between 1997 and 2005 Natech became the world leader in Fuel Cell technology with 57 new patents. At the end of 2005, 22% of the vehicles sold by Volvo and Saab in Skandinavia were powered by NAtech fuel cells.

The first Integrated Coal Zero-Emission Plants started in 2002 and hydrogen became cheaper and more accesible. Hydrogen pipelines were constructed and hydrogen fuel stations became common. Union government turns into a hydrogen economy in early 2004 and announced that civil combustion engines will be banned by the end of 2020.

Many national and international companies grew in the last years in order to get a place in the new hydrogen economy, but at the end of 2015 Natech still had more than 83% of the Union FUel Cell market share and more than 50% of world one.

Phosphoric acid fuel cells were the most extended in the early 2000s. Thousands of fuel cell systems have been installed across the Skandinavia and other nations - in hospitals, nursing homes, hotels, office buildings, schools, utility power plants, landfills and waste water treatment plants. PAFCs generate electricity with efficiency varying between 40 and 60% depending on the models - and nearly 85% of the steam this fuel cell produces is used for cogeneration. Phosphoric acid fuel cells use liquid phosphoric acid as the electrolyte and operate at about 150-200 ºC. One of the main advantages to this type of fuel cell, besides the nearly 85% cogeneration efficiency, is that it can use impure hydrogen as fuel. PAFCs can tolerate a CO concentration of about 1.5 percent, which broadens the choice of fuels they can use. The power range of existing PAFCs is 25-250 kW. However, if several units are linked, PAFCs can achieve a combined power output greater than 10 MW.

These fuel cells operate at relatively low temperatures (40-90 ºC), have high power density, can vary their output quickly to meet shifts in power demand, and are suited for applications, such as in automobiles, where quick startup is required. They are the primary candidates for light-duty vehicles, for buildings, and potentially for much smaller applications such as replacements for rechargeable batteries. This type of fuel cell is sensitive to fuel impurities. Cell outputs generally range from 50 watts to 300 kW.

Molten carbonate fuel cells use an electrolyte composed of a molten carbonate salt mixture suspended in a porous, chemically inert matrix, and operate at high temperatures - 800 ºC. They require carbon dioxide and oxygen to be delivered to the cathode. To date, MCFCs have been operated on hydrogen, carbon monoxide, natural gas, propane, landfill gas, marine diesel, and simulated coal gasification products. 10 kW to 25MW MCFCs have been tested on a variety of fuels and are primarily targeted to electric utility applications.

Solid oxide fuel cells use a hard, non-porous ceramic compound as the electrolyte, and operate at very high temperatures between 500-700 ºC. One type of SOFC uses an array of meter-long tubes, and other variations include a compressed disc that resembles the top of a soup can. Tubular SOFC designs are being produced by several companies around the world. SOFCs are suitable for stationary applications as well as for auxiliary power units (APUs) used in vehicles to power electronics.

NAsofc, the last NAtech patent is a SOFC fuel cell capable of working at very low temperatures not over 50-60ºC with electrical efficiences over 75%, and is the world most advanced fuel cell.

AFCs operate in an electrolyte solution of potassium hydroxide and can use a variety of non-precious metal catalysts at operating temperatures of 10-200°C. Fueled by hydrogen gas, AFCs have a high chemical reaction rate and offer an electrical efficiency of 60-70%. However, AFCs are poisoned easily by small quantities of carbon dioxide, so they are mostly used in controlled aerospace and underwater applications. They require pure hydrogen and oxygen.

These cells are similar to the PEM cells in that they both use a polymer membrane as the electrolyte. However, in the DMFC, the anode catalyst itself draws the hydrogen from the liquid methanol, eliminating the need for a fuel reformer. Efficiencies of about 40% are expected with this type of fuel cell, which would typically operate at a temperature between 40-100 ºC. This is a relatively low range, making this fuel cell attractive for tiny to mid-sized applications, to power cellular phones and laptops.

Microbial fuel cells use the catalytic reaction of microorganisms such as bacteria to convert virtually any organic material into fuel. Some common compounds include glucose, acetate, and wastewater. Enclosed in oxygen-free anodes, the organic compounds are consumed (oxidized) by the bacteria or other microbes. As part of the digestive process, electrons are pulled from the compound and conducted into a circuit with the help of an inorganic mediator. MFCs operate well in mild conditions relative to other types of fuel cells, such as 20-40 degrees Celsius, and could be capable of producing over 50% efficiency. These cells are suitable for small scale applications such as potential medical devices fueled by glucose in the blood, or larger such as water treatment plants or breweries producing organic waste that could then be used to fuel the MFCs.

NAtech StickCELL fuel cartridge is the world most advanced portable hydrogen fuel cell. It has a battery-like form factor and contains a special metal alloy that allows hydrogen to be stored in a solid-state, as part of the metal alloy matrix inside the cartridge. In contrast with ordinary compressed hydrogen tanks, the pressure inside the canister is very low, making this device the safest and most practical means of storing hydrogen. The StickCELL has the additional advantages of being refillable (from pressurized gas bottles, or from water-electrolysis based devices), non-toxic, eco-friendly, and competitive on cost/performance with existing battery devices. StickCELL is used to power any kind of electronic device from a smartphone to a weapons system.

Thousands fuel cell systems have been installed all over the Skandinavia — in hospitals, nursing homes, hotels, office buildings, schools, utility power plants - either connected to the electric grid to provide supplemental power and backup assurance for critical areas, or installed as a grid-independent generator for on-site service in areas that are inaccessible by power lines.

With the use of computers, the Internet, and communication networks steadily increasing, there comes a need for more reliable power than is available on the current electrical grid, and fuel cells have proven to be up to 99.999% (five nines) reliable. Fuel cells can replace batteries to provide power for 1kW to 5kW telecom sites without noise or emissions, and are durable, providing power in sites that are either hard to access or are subject to inclement weather. Such systems would be used to provide primary or backup power for telecom switch nodes, cell towers, and other electronic systems that would benefit from on-site, direct DC power supply.

Fuel cells currently operate at landfills and wastewater treatment plants across the country, proving themselves as a valid technology for reducing emissions and generating power from the methane gas they produce. They are also installed at several breweries. Untreated brewery effluent can undergo anaerobic digestion, which breaks down organic compounds to generate methane, a hydrogen rich fuel.

At the end of 2020 all the civilian vehicles in Skandinavia must be powered with fuel cells. Fuel cells are highly efficient and eliminate CO2 emissions. Because the fuel cell system is so much quieter than a combustion engine, fuel cell vehicles significantly reduce noise pollution as well.

Fuel cells were developed for mining locomotives since they produce no emissions and avoid risk in underground mining. Fuel cell powered locomotives are being used for military and commercial railway applications.

Fuel cells are an attractive option for aviation since they produce zero or low emissions and make barely any noise. The military is especially interested in this application because of the low noise, low thermal signature and ability to attain high altitude. A consortion between Saab and NAtech developed in 2015 the first commercial fuel cell for use in planes. Today, NAtech sells aerial fuel cells to UAV manufacturers around the world. A first prototype of a small plane powered by fuel cells in being tested by Saab.

For each liter of fuel consumed, the average outboard motor produces 140 times the hydrocarbonss produced by the average modern car. Fuel cell engines have higher energy efficiencies than combustion engines, and therefore offer better range and significantly reduced emissions. Skandinavia has committed to converting its vast commercial, fishing and military fleet to use fuel cells to provide primary power though there is no limit date for the moment.

Fuel cells can provide power where no electric grid is available, plus they are quiet, so using one instead of a loud, polluting generator at a campsite would not only save emissions, but it won't disturb nature, or your camping neighbors. Portable fuel cells are also being used in emergency backup power situations and military applications. They are much lighter than batteries and last a lot longer, especially imporant to soldiers carrying heavy equipment in the field.