The Galdhøpiggen Class destroyer is the only destroyer class in service within the Kongelige Sjøforsvaret. The ships are named after highest norwegian peaks, with the lead ship of the class bearing the name of Galdhøpiggen, the highest one. The ships were Spruance Class Destroyers bough in 1994 from United Commonwealth.

At the beginning of the 90s the government of Skandinavia began to negotiate with the government of the United Commonwealth the possibility of acquiring 8 of its Spruance Class Destroyers. After several years of negotiations the agreement was closed in 1994 and the vessels were transferred between 1995 and 1996 as Galdhøpiggen Class. Between 2000 and 2004, all vessels underwent a renovation process up to the current Mk2 standard. Its operational life is expected to extend to 2024 or beyond if necessary.

The Spruance design was modular in nature, allowing for easy installation of entire subsystems within the ship. Although originally designed for anti-submarine warfare, once acquired by Kongelige Sjøforsvaret they should be used as multirole vessels. That's why FLOSK immediately began working on a series of upgrades (Mk2) that ended up in 2004 with changes in the following parts:

The power plant of the ship has been completely redesigned to suit the needs and requirements of the Sjøforsvaret and the new systems and elements of the ship. FLOSK chose to equip the ship with a mixed multi-gas turbine and fuel cell propulsion system (COFCAG) using the existing General Electric LM2500 gas turbine and adding a suit of NAtech fuel cells able to use natural gas. At low speed and during maneuvers the system uses the power delivered by the fuel cells, using the gas turbine system to achieve higher speeds. In addition, the system reuses the exhaust gases to supercharge the turbine and for the ship's heating systems, which considerably reduces the ship's thermal footprint. Power plant of the ship was designed taking into account the current needs of energy for propulsion and other systems on board, so it was possible to assume an increase in power required if new equipment or systems were installed in the future.

The propulsion system is fully electrical with four AZIPOD s (ASEA azimut thrusters) mounted externally to the main hull. The electricity for the motors is supplied by the power system.

The ships are named after highest peaks in Norway. 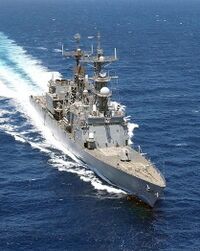 Retrieved from "https://wiki.conworlds.org/w/index.php?title=Galdhøpiggen_Class&oldid=38085"
Categories:
Cookies help us deliver our services. By using our services, you agree to our use of cookies.