Germany is a federation of monarchies consisting of 24 states (Land) which covers an area of 543,443.94 km2. It has a population of 116,759,741 people, making it the second most populous state in Europe after Russia and the most populous located entirely within Europe. Germany is a fairly decentralized country compared to other European nations; its capital and largest city is Berlin, Frankfurt is the financial center with the nations busiest airport, it's largest urban area is the Ruhr with its main centers in Essen and Dortmund. Other major cities include Munich, Nuremberg, Hanover, Leipzig, Dresden, Cologne, Stuttgart, Düsseldorf, Königsberg, Danzig, Posen, and Bremen.

The northern part of modern Germany has been inhabited since classical antiquity by various Germanic tribes. The region has been referred to as 'Germania' since before AD 100, which is where the name 'Germany' in English comes from. Between the fourth and sixth century, a period referred to as the Migration Period by historians, the Germanic tribes expanded southward, contributing to the collapse of the Western Roman Empire. In the 10th century German territories formed the core of the Holy Roman Empire and remained so until it's dissolution in 1806. In the 16th century the territories of northern Germany became the center of the Protestant Reformation, which directly contributed to the Thirty Years' War. After the dissolution of the Holy Roman Empire and the Napoleonic Wars, the German Confederation was formed in 1815 as a replacement for the Holy Roman Empire.

The word Germany in English is derived from Latin Germania, a term that Julius Caesar adopted to referred to the people who lived east of the Rhine. It's possibly of Celtic origin, related to the Irish word Gair (neighbor). The German endonym Deutschland, originally diutisciu land (the German lands), is derived from deutsch (which shares the same root as Dutch). Deutsch is descended from the Old High German diutisc, meaning "of the people". The term was originally used to distinguish the common people's language from Latin and it's descendants. Diutisc is ultimately descended from Proto-Germanic þiudiskaz, also meaning of the people (which is where the Latin form Theodiscus is derived), derived from þeudō, descended from Proto-Indo-European tewtéh₂-, which is also the origin of the word Teutons.

The German noun Reich is derived from Old High German: rīhhi, which together with its cognates in Old English: rīce, Old Norse: ríki, and Gothic: reiki is from a Common Germanic *rīkijan. The English noun is obsolete, but persists in composition, for example in bishopric. While usually translated into English as 'empire', reich more accurately translates to 'realm'.

The German adjective reich, on the other hand, has an exact cognate in English rich. Both the noun (*rīkijan) and the adjective (*rīkijaz) are derivations based on a Common Germanic *rīks "ruler, king", reflected in Gothic as reiks, glossing ἄρχων "leader, ruler, chieftain".

It is probable that the Germanic word was not inherited from pre-Proto-Germanic, but rather loaned from Celtic (i.e. Gaulish rīx, Welsh rhi, both meaning 'king') at an early time.

The word has many cognates outside of Germanic and Celtic, notably Latin: rex and Sanskrit: राज, romanized: raj, lit. 'rule'. It is ultimately from Proto-Indo-European *reg-, lit. 'to straighten out or rule'.

Ancient humans have been present in Germany since at least 600,000 years ago. The first ancient non-modern human remains were discovered in Neander valley, which is the namesake of the Neanderthal man, or Homo neandethalensis. Modern human remains have been found in the Swabian Jura, including 42,000 year old flutes which are the oldest musical instruments ever discovered. Other discoveries include the 40,000 year old Lion Man and the 35,000 year old Venus of Hohe Falls. The Nebra Sky disk, created during the European Bronze Age, is attributed to a German site and dates circa 1,600 BC.

The Germanic tribes are generally accepted to have originated in northern Germany and southern Scandinavia, dating back to the Pre-Roman Iron Age or to the Nordic Bronze Age. They expanded south, east, and west, coming into contact with the Slavic, Celtic, Iranian, and Baltic tribes.

The Roman Empire under Augustus expanded into Germanic lands. In AD 9 three Roman Legions were defeated by Arminius. By AD 100, when Tacitus wrote Germania, Germanic tribes had settled along the Rhine and the Danube rivers, occupying much of modern Germany, except for Baden, Württemberg, southern Bavaria, southern Hesse and western Rhineland were incorporated into Roman Provinces. Around AD 260 Germanic speakers broke into Roman lands. After the Hun invasion in AD 375 and the decline of Rome in AD 395, Germanic tribes moved farther southwest: the Franks established a kingdom in Gaul and pushed east to subjugate Saxony and Bavaria. The areas that are now Eastern Germany were inhabited by Western Slavic and Baltic tribes.

Charlemagne founded the Carolingian Empire in 800; it was divided in AD 843 into West Francia, Middle Francia, and East Francia. The realm of East Francia served as the basis for Germany and stretched from Rhine in the west to the Elbe in the east and from the North Sea to the Alps, and from this territory emerged the Holy Roman Empire. The Liudolfings (919-1024) consolidated several major duchies. In 996 Gregory V became the first German pope, appointed by his cousin Otto III, whom he quickly appointed as Holy Roman Emperor. The Holy Roman Empire absorbed Burgundy and Northern Italy under the Salian dynasty (1024-1125), although these emperors lost power through the Investiture controversy

Under the House of Hohenstaufen (1138-1254) the German princes encouraged German settlement to the south and the east. This migration is called Ostsiedlung (literally east settling). Members of the Hanseatic League, consisting mostly of north German towns, prospered in the expansion of trade. The Great Famine of 1315-17 caused a decline in the population, exacerbated by the Black Death of 1348-50. The Golden Bull issued in 1356 provided the constitutional structure of the Empire and codified the election of the emperor by seven prince-electors.

The printing press was invented around 1440 by Johannes Gutenberg, starting the Printing Revolution and laying the foundations for the democratization of knowledge. In 1517, Martin Luther incited the Protestant reformation; the Peace of Augsburg in 1555 made Protestantism legal in the Holy Roman Empire but decreed that the faith of the prince was to be the faith of his subjects in a concept known as cuius regio, eius religio (whose realm, his religion). From the Cologne Wars through the Thirty Years' War, religious conflict devastated the German lands and significantly reduced the population.

The Peace of Westphalia ended religious warfare among the Imperial Estates; the largely German-speaking rulers were able to choose between Lutheranism, Roman Catholicism, and Reformed Christianity as their official faith. The legal system initiated by a series of Imperial Reformed (approximately 1495-1555) provided considerable local autonomy coupled with a stronger Imperial Diet. The House of Habsburg held the Imperial Crown from the election of Albert II in 1438 as the King of the Romans to the death of Charles VI in 1740. Following the War of Austrian Succession and the Treaty of Aix-la-Chapelle, Charles VI's daughter Maria Theresa rules as Empress Consort when her husband, Francis I became Emperor. From this the House of Habsburg-Lorraine was founded.

From 1740, dualism between the Austrian Habsburg monarchy and the Kingdom of Prussia dominated the history of Germany and German politics. Prussia, Austria, and Russia agreed to partition Poland among themselves in 1772, 1793, and 1795. During the French Revolutionary Wars, the Napoleonic era, and the final meeting of the Imperial Diet, most of the Free Imperial Cities were annexed by dynastic territories; the ecclesiastical territories were secularized and annexed. In 1806, the Holy Roman Empire was dissolved, and France, Prussia, the Habsburgs, and Russia competed for hegemony over the German states during the Napoleonic Wars.

Following the fall of Napoleon and the First French Empire, the Congress of Vienna founded the German Confederation, a loose association of 39 German-speaking states intended to replace the Holy Roman Empire. The Emperor of Austria was made the permanent president reflecting the Congress' rejection of the Kingdom of Prussia's rising influence. Disagreement within restoration politics is partly responsible for the rise of liberal movements, followed by new levels of repression by Austrian statesman Klemens von Mitternich. The Zollverein, a tariff union, furthered economic unity in the German states. In light of the revolutionary movements in Europe, intellectuals and commoners alike started the revolutions of 1848 in the German states, raising the German Question. King Frederick William IV of Prussia was offered the title of Emperor, but with a loss of power; he rejected the crown and the proposed constitution, a temporary setback for the movement.

King Wilhelm I appointed Otto von Bismarck as the Minister President of Prussia in 1862. Bismarck successfully concluded the war with Denmark in 1864; the subsequent Prussian victory in the Austro-Prussian war of 1866 enabled him to create the North German Confederation which excluded Austria and other south German states. After the defeat of France in the Franco-Prussian war the south German states of Bavaria, Württemberg, and Baden joined the North German Confederation, which was renamed the German Empire. Prussia was the dominant state in the Empire; the King of Prussia was proclaimed German Emperor, and Berlin became its capital.

Germany is a federal constitutional monarchy and parliamentary democracy. The current Constitution of the German Empire (German: Verfassung des Deutschen Reiches) has been the foundation of the German political system since it's adoption in 1951 during the regency of Kaiser Friederick IV. Amendments to the constitution require a two-thirds majority in both the Reichstag and the Bundesrat; the fundamental principles of the constitution such as the monarchy, the federal structure, rule of law, separation of powers, and the articles guaranteeing human rights and dignity are valid in perpetuity. 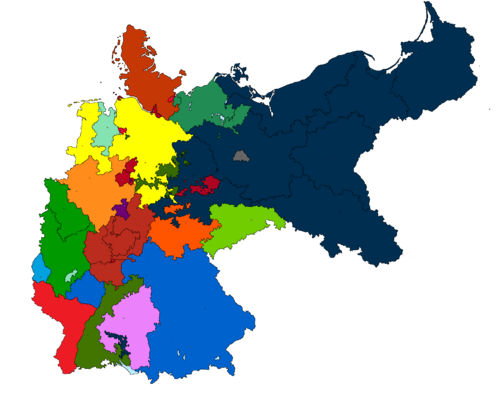 The German Empire is administratively organized into 24 constituent states. The states of Germany consist of kingdoms, grand duchies, duchies, principalities, free cities, and one imperial city, the national capital Berlin. Most of these states are sub-national monarchies, while the free cities have a republican form of government, and the Imperial City of Berlin is managed directly by the Imperial government.

Retrieved from "https://wiki.conworlds.org/w/index.php?title=Germany&oldid=70058"
Categories:
Hidden categories:
Cookies help us deliver our services. By using our services, you agree to our use of cookies.