The Harald Blåtand Class, is a class of eight guided missile destroyers built for the Sjøforsvaret. The class is primarily designed for anti-aircraft and anti-missile warfare but also has strong anti-ship and ASW capabilities. The ships were planned to be built with the StanFlex System and were built in different shipyards and assembled int the three major Skandinavian shipyards: Odense Staalskibsværft, Aker Yards and Saab Kockums. The first ship in the class, KSS Harald Blåtand, was commissioned on February 2019 and has been integrated in the SK Projection Task Force 1. All 8 ships are expected to be operational in 2024 to replace the Galdhøpiggen Class destroyers that will be decommissioned that year.

In the 1990s the Skandinavian government decided to equip its fleet with blue water capabilities. As part of this program, 8 destroyers were purchased from United Commonwealth which were transformed into Galdhøpiggen Class in the early 2000s. According to strategic plans, these destroyers will be withdrawn from service in 2024. To replace their functions, a new class of destroyers was planned. This new class shold be in operational service before the final withdrawal of the Galdhøpiggen Class.

After several years of planning, in 2014 the order for the construction of 8 new destroyers was signed. This new class of destroyers was called the Harald Bluetooth Class, the name of the first ship of the class.

The construction of the 8 destroyers was developed at the same time than the 2020 Aircraft Carrier project. The aircraft carrier project mobilized a significant portion of national shipbuilding resources, making the 2024 deadline for completing construction of the 8 destroyers seemed difficult to achieve. However, and thanks to the standardization of the system StanFlex, several shipyards of different sizes have been able to participate in the project and advance manufacturing deadlines.

The design of the class is intended to be a multi-role ship, although paying special attention to anti-aircraft and anti-missile fighting. It is intended as a support for operations integrated into the combat group of an aircraft carrier, but also as a powerful platform for other operations.

In the design and construction of the ships the StanFlex system was used, which has allowed not only to reduce construction times but also to provide ships with the ability to adapt and integrate new combat capabilities in a short space of time.

The power plant of the ship has been completely designed to suit the needs and requirements of the Sjøforsvaret and the current and future systems of the ship. FLOSK chose to equip the ship with a mixed multi-gas turbine and fuel cell propulsion system (COFCAG) developed jointly by NAtech and ASEA. Main fuel for which the system has been designed is hydrogen, but the system can also work with natural gas, methane and other gases, although with a lower energy efficiency. At low speed and during maneuvers the system uses the power delivered by the fuel cells, using the gas turbine system to achieve higher speeds. In addition, the system reuses the exhaust gases to supercharge the turbine and for the ship's heating systems, which considerably reduces the ship's thermal footprint. Power plant of the ship was designed taking into account the current needs of energy for propulsion and other systems on board, so it was possible to assume an increase in power required if new equipment or systems were installed in the future. The total power of the shipis 112MW supplied by 2 x ASEA COFGAG multi-gas turbine 36MW each and 4 x NAtech STATPOWER Multi Fuel-cells 10MW each.

The ships are named after kings of the House of Knýtlinga. 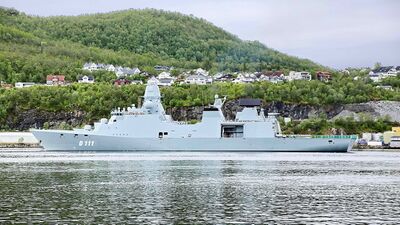 Retrieved from "https://wiki.conworlds.org/w/index.php?title=Harald_Bluetoth_Class&oldid=39336"
Categories:
Cookies help us deliver our services. By using our services, you agree to our use of cookies.