Haubits 77 (Field Howitzer 77 or FH77) is a Skandinavian 155 mm howitzer. It was developed and manufactured by BOFORS. It was available in two versions, the original (sometimes referred to as Haubits 77 A) with a sliding block mechanism, and the later FH77 B export version with an interrupted screw breech. The current version, the FH77NG (Next Generation) has been developed in 2005.

In the 1960s Skandinavia started to look for a replacement for the French Haubits F (Obusier de 155 mm Modèle 50). The American M109 howitzer was offered and tested. Though the price was low the Swedish Arms Administration found the high maintenance costs, the low rate of fire and the not so good mobility of the M109 made it worth the effort to develop a domestic howitzer. 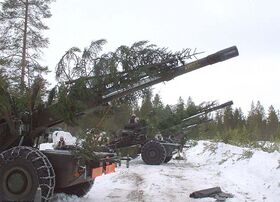 The requirements for a new gun would be:

The result was a compromise between a more expensive Self propelled howitzer and a less mobile conventional towed howitzer.

The FH77 was the first field howitzer featuring an APU to make it self-propelled for tactical movement. The rate of fire was, at the time, exceptionally high for a 155 mm howitzer. The FH77 could fire 3 rounds in 8 seconds, or 6 rounds in 25 seconds. In a sustained firing role it could fire 6 rounds every second minute for 20 minutes.

Though the haub 77 was a formidable gun it seemed impossible to export. There were two reason for this:

Therefore Bofors developed a new version - the FH 77B. The main difference was that the B-model used a servo operated interrupted screw breech, instead of the sliding block action on the FH 77. The maximum elevation had been increased from 50° to 70°. The barrel is slightly longer, 39 calibres, and uses a single baffle muzzle brake as opposed to the pepper-pot style muzzle brake on the 77. The engine was a Scania diesel. Since the B-version used bagged charges it was somewhat slower than the original model - 3 rounds in 10 seconds compared to 3 rounds in less than 8 seconds. The maximum range, on the other hand, was increased to 24km and using base-bleed extended to 28km.

Once BOFORS was refounded in 2001 under the Kalmar Union government, the company was ordered to undertake an upgrade program for the existing FH77. The result of this upgrading were improvements in stabilization, fire control, accuracy and mobility. The unit is powered by a NAtech Hydrogen Fuel Cell. 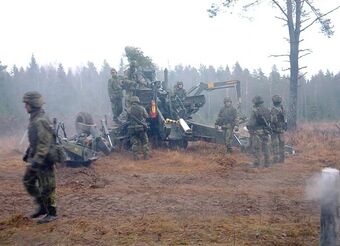 The FH77 uses the m/77 (42kg) 155mm HE shell combined with a plastic casing, containing 6 increments. The FH77 could also use base bleed ammunition developed for the FH77B.

The FH77 is powered by a Volvo B20 petrol engine. The engine is connected to three hydraulic pumps. Two pumps are linked to the wheels and one is used for traverse, elevation, ramming and ammunition crane.

The crew consists of 10-14 men. The minimum crew setup would be 5 men; commander, layer, loader 1, loader 2 and loader 3. The commander direct all the activity of the crew from a platform to the left of the gunlayer. The layer sits on the left hand side of the gun, operating the fire control computer and driving the howitzer when in self deployment mode. Loader 1 is located to the right hand side of the gun and is in charge of supplying the shells form the loading table in front of him. Loader 2 and 3 would be working on the ground, providing shells to loader 1 by means of a hydraulic crane and loading cases in the loading trough.

The dedicated towing vehicle for the FH77 was the Scania SBAT111 (Tgb 40). NG versions are able to be towed by a wide range of modern Saab Scania trucks. The truck is equipped with a crew compartment behind the driving cab and a HIAB-crane for ammunition handling. The Howitzer's APU can be started and controlled by the driver of the towing vehicle to give an extra boost during off road driving. The maximum towing speed is 70 km/h (45 mph).

The FH77 is maneuvered by controlling the torque of the two main wheels. Speed is regulated by changing the RPM of the APU. The howitzer is deployed by spreading the trail legs, raising the castor wheels and drive the howitzer in reverse.

Retrieved from "https://wiki.conworlds.org/w/index.php?title=Haubits_FH77&oldid=33730"
Categories:
Hidden category:
Cookies help us deliver our services. By using our services, you agree to our use of cookies.