The Imperial Chinese Navy (Chinese: 中國帝國海軍, pinyin: Zhōngguó dìguó hǎijūn), commonly known as the Chinese Navy or the Imperial Navy, is the naval warfare branch of the Armed Forces of the Chinese Empire and is one of the oldest continuously serving navies in the world. With 255,000 active duty personnel, including 10,000 marines and 26,000 naval aviation personnel, and 512 warships as of 2017, China has the largest navy in the world. The Imperial Navy is divided into the Beiyang (Northern Ocean) and Nanyang (Southern Ocean) Fleets, based at the ports of Qingdao and Zhanjiang, respectively.

The first Chinese navy was established in 1132 during the Song Dynasty, and was formally reestablished by the current Qing Dynasty in 1875 with the creation of the modernized Beyang Fleet. By the time of the Song, China had a need for a strong navy to defend its merchant fleets that traded with Middle Eastern and African societies, but due to the threats of invasion by nomadic peoples from the west the navy has always traditionally had a secondary role to the land forces. By the late 19th century, after the Qing made an effort to purchase European ironclad warships China had the largest navy in Asia and one of the largest in the world. China's naval dominance in East Asia ended with its defeat during the First Sino-Japanese War in 1894–1895, and due to the unrest over the following decades the Imperial Navy played a minor role in subsequent conflicts like the Second Sino-Japanese War. It was not until the 1960s and the Cold War that the Chinese Navy was rapidly expanded to counter the threat of the Soviet Union, and since the rise of China as a global economic power from the 1990s the Qing made it a national policy to focus on developing a blue-water navy by 2030.

In 2008, Admiral Qu Qichen confirmed that China plans to operate a small fleet of aircraft carriers in the near future, but for the purpose of regional defence as opposed to "global reach." As of 2013 officials have also outlined plans to operate in the first and second island chains. Chinese strategists term the development of the Imperial Fleet from a green-water navy into "a regional blue-water defensive and offensive navy."

Cadets from China at the Britannia Royal Naval College in the United Kingdom, early 1900s

Chinese sailors and officers on parade during a visit to San Francisco, Kingdom of Sierra

A series of warships were ordered from Britain and Germany in the late 1870s, and naval bases were built at Port Arthur and Weihaiwei. The Nanyang Fleet was established in 1875, and grew with mostly domestically built warships and a small number of acquisitions from Britain and Germany. The separate Fujian and Guangdong fleets became part of the Imperial navy after 1875. The fleets fought against the French Navy during the Sino-French War in 1885, but its performance was poor. The Fujian Fleet was almost annihilated during the Sino-French War, and was only able to acquire two new ships thereafter. By 1891, due to budget cuts, the Fujian Fleet was barely a viable fleet. The Guangdong Fleet was established in the late 1860s and based at Whampoa, in Canton (now Guangzhou). The Admiralty or "Naval Office" was established at that time to coordinate the activities of the different fleets.

The first British-built ships were delivered in 1881, and the Beiyang Fleet was formally established in 1888. In 1894 the Beiyang Fleet was on paper the strongest navy in Asia at the time, and the eighth strongest in the world. However, it was largely lost during the First Sino-Japanese War in the Battle of the Yalu River. Although the Zhenyuan and Dingyuan modern batttleships were impervious to Japanese fire, they were unable to sink a single ship and all eight cruisers were lost. The battle displayed once again that the modernisation efforts of China were far inferior to the Meiji Restoration.

Since the destruction of the Beiyang Fleet in 1894, the Qing dynasty rebuilt its navy by purchasing new cruisers from Great Britain and establishing a more unified command instead of multiple regional navies. In 1909 an Admiralty Department was established to oversee the entire Imperial Fleet. In early 1911, the new warships toured East Asian, North and South American ports, including the visit of the Guangxu Emperor to Sierra. Later that year warships were summoned to support the Imperial Army in suppressing the Wuchang uprising during the Xinhai Revolution, along the Yangtze river.

Throughout the late 1910s and 1920s, the Imperial Navy would receive some new warships but would not play a major role during the National Protection War or other conflicts, and the Imperial Army remained the government's priority for development.

By the time war broke out between Japan and China in 1937, the Imperial Fleet could not match the Imperial Japanese Navy at sea and mostly focused on riverine warfare. Much of the Chinese coastline fell under Japanese occupation during the war. Sailors were drafted into ground warfare due to the Navy's minor role, with the establishment of the Naval Infantry Division in January 1939. In March 1939 it was renamed 1st Naval Infantry Division as a second one was also created, for a total of about 15,000 men between them. It was assigned to the 71st Corps, which also included the Chinese Army's elite German-trained 36th, 87th, and 88th Divisions. From 1942 to 1944, the Naval Infantry fought in the Burma campaign, and in 1945 they saw action in southern China during the Second Guangxi campaign. After the surrender of Japan, the divisions were disbanded and the Navy resumed its normal role.

The main combat forces of the Imperial Navy are under the command of the office of Commander-in-chief Fleet, also sometimes referred to as the Fleet Commander, who is the Admiral responsible for managing the operations, resourcing, and training of ships, equipment, personnel, and aircraft. The office is usually held by a full admiral or sometimes a grand admiral, answering directly to the Chief of the Admiralty Naval Staff.

The forces of the Imperial Navy are organised into two fleets:

Directly subordinated to the Commander-in-chief Fleet are the Flag Officer Northern Ocean Fleet and Flag Officer Southern Ocean Fleet, usually both full admirals. Each fleet consists of surface forces (destroyers, frigates, transports, etc.) as well as submarines, aircraft, and coastal defence units. Beyond the fleet level units are organised into flotillas for surface vessels and submarines, and air regiments or squadrons for aviation.

The Chinese military intervention in Syria starting in 2015 led to the establishment of the independent Mediterranean Squadron that operates off the Syrian coast, and it is headed by the Commander-in-Chief Middle East. Similarly, in 2017, with the creation of the Chinese naval base in Djibouti to help combat piracy near Somalia, the forces there are also subordinated to the office of Commander-in-Chief Middle East. In the long term, naval strategists intend for China to have an active naval presence in other parts of the world.

The branches of the Chinese Navy include the Submarine Force, the Surface Force, the Coastal Defense Force, the Marine Corps and the Naval Air Force. 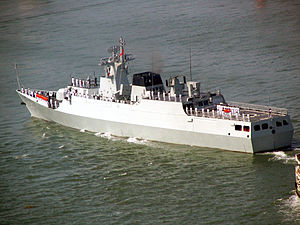 As of December 2019, the Imperial Chinese Navy operates over 496 combat ships and 232 various auxiliary vessels, with 255,000 seamen in its ranks, having the largest navy in the world. The Chinese Navy also has more than 710 naval aircraft including fighters, bombers and electronic warfare aircraft. Internationally, in English, Chinese military ships use the prefix His Imperial Majesty's Ship (HIMS), following many of the British Royal Navy traditions.

All of China's warships in commission are domestically made, with the exception of several Anglo-American ship classes acquired during the Cold War (including Oliver Hazard Perry-class frigates and Knox-class frigates), and the aircraft carrier HIMS Zhejiang (the Soviet Varyag-class), which was an incomplete Soviet carrier purchased from the Eurasian Commonwealth after the dissolution of the Soviet Union. China's first domestically built aircraft carrier, HIMS Shandong (Shandong-class), entered service in 2014.

Until the 1990s much of the Imperial Fleet consisted of coastal patrol ships and small missile and gunboats, which reflected the dynasty's focus on developing the ground forces for a potential conflict with the Soviets. Since 2000, China has been rapidly modernising and expanding its navy with modern warships for the long term Qing strategy of developing a blue-water navy capable of defending China's interests in the region and the world. As of December 2019, China has two aircraft carriers, six amphibious landing ships, 63 landing ships, 35 destroyers, 50 frigates, 41 corvettes, 29 mine countermeasure vessels, 75 submarines, 94 submarine chasers, and 17 gunboats.

Newer classes of guided missile destroyers and frigates, including the Type 055 destroyer which TPAC classified as a cruiser and is one of the largest warships built in East Asia since World War II, have been developed to strengthen the Surface Force's main fighting units.

As of 2020, China plans on creating at least three aircraft carrier battle groups to defend its economic interests abroad and its territorial claims in the South China Sea. HIMS Zhejiang is an outdated design that would not be able to face any Sierran or Japanese carrier groups without extensive land-based air support, so it is going to be converted to a training ship. Two Type 003 carriers are currently under construction to supplement HIMS Shandong.

Retrieved from "https://wiki.conworlds.org/w/index.php?title=Imperial_Chinese_Navy&oldid=32925"
Categories:
Cookies help us deliver our services. By using our services, you agree to our use of cookies.