Iran (Persian: ایران), officially known as the Guarded Domains of Iran (Persian: ممالک محروسه ایران‎, translit. Mamâlek-e Mahruse-ye Irân), is a sovereign state in Western Asia. It is the nth-most populous country with a population of over 142 million people. By area, it is the nth-largest country, spanning tbd square kilometers (tbd square miles). Iran is bordered to the northwest by Azerbaijan; to the north by the Kazakhstan and Uzbekistan; to the northeast by Tajikstan; to the east by China; to the southeast by India; to the south by the Gulf of Oman; to the southwest by Khuzestan and Persian Gulf; and to the west by Kurdistan. Iran's capital, Mashhad is the largest city in Western Asia; other major urban centers include Isfahan, Shiraz, Tehran, and Kabul.

Iran was first unified in the sixth century BCE by Cyrus the Great, the founder of the Achaemenid Empire. Stretching from the Bosporus to the Indus, it became the largest state to ever exist at that time. The empire eventually fell to Alexander the Great, but reemerged shortly after as the Parthian Empire, followed by the Sasanian Empire in the third century, which became a leading world power in Late Antiquity. Exhausted by continuous war and civil strife, Iran was subjugated by the Rashidun Caliphate, leading to the gradual replacement of Zoroastrianism with Islam as the prevailing religion in the region. Iranians contributed greatly to the Islamic Golden Age, producing many influential figures such as Avicenna and Al-Ghazali. Following the decline of the Abbasid Caliphate, Iran was ruled by various native dynasties, such as the Samanids and Buyids, prompting a revival in Iranian culture and tradition. This period was ended by the conquests of the Seljuk Turks and the Mongols soon after, though the flourishing of Iranian culture and its contributions to various sciences continued for centuries to come. In the fifteenth century, the Safavid dynasty reestablished a unified Iranian polity which led to relative peace and prosperity, despite occasional conflicts with neighboring Ottoman Empire.

In the last years of Safavid rule, the state was overwhelmed by rebellion and ineffective governance, leading to the rise of the Afsharid dynasty, which wielded influence from the Caucasus to Bengal at its territorial apex. The Persianate Renaissance began in Iran due to the mutual exchange of traditions with the Indian Subcontinent, ushering in renewed interest in science, philosophy, and art across the region. During the nineteenth century, Iran pursued a comprehensive program of reform and modernization in order to compete with the neighboring Russian and British Empires, the dominant colonial powers at the time.

The name Iran is derived from the writings of Greek historians, who referred to the entire country as Persis, though it originally denoted what is today defined as Fars. As the most significant power at the time was the Achaemenid Empire, the term persisted, even long after the conclusion of the Greco-Persian Wars. Iranians refer to their own country as Irân (ایران), which derives directly from Middle Persian Ērān (𐭠𐭩𐭥𐭠𐭭), meaning "of the Iranians". This term is ultimately a derivative of Proto-Indo-Iranian *áryas, meaning "Aryan", the self-designation of the Indo-Iranians.

Nadir Shah Afshar, had deposed the Safavi dynasty from the throne of Iran in 1736 and made himself the Shah of Iran. This point marked the beginning of the modern period of Iranian history.

Nadir Shah began marching into Mughal territory in 1738, attracted by the riches of India which he needed to finance his expeditions. He conquered Kabul in June, 1738. Nadir Shah marched further, sacking Jalalbad in September. Nasir Khan, the Mughal governor of Afghanistan, who was based at Peshawar assembled a force to fight Nadir Shah, but was defeated and forced to flee. Peshawar fell to Nadir Shah's invading forces in November. Nadir Shah captured Lahore in 1739 without any major Mughal attempt to stop his advance. A large Mughal force met his forces at Karnal, in February 1739. In the Battle of Karnal, the Mughal forces were defeated and the Mughal Emperor Muhammad Shah surrendered. Nadir Shah soon entered Delhi. Nadir Shah proclaimed himself the Emperor of India (Shahenshah-i-Hind), a week after entering Delhi on 27 March, 1739, at a great Durbar that was held in his honor. This event marked the end of the more than two centuries of Mughal rule. Nadir Shah had left his eldest son, Reza Qoli Mirza, to maintain affairs in Iran. The establishment of the Afsharid Empire in India in 1739 was followed by several Indian campaigns and the consolidation of Afsharid power in India.

Nadir Shah returned to Iran in 1742. Nadir Shah appointed Nasrullah Mirza, his second eldest son, to look after the affairs in India. Nadir Shah's health had declined markedly by this point and he took on a more despotic personality, marked by increasing cruelty. He brought with him a large number of Northern Indian nobles, including some Mughal princes and appointed them governors of the parts of his realm west of the Indus. A large number of Indian administrators, accountants and soldiers also followed to help set up an Indianized system of administration in Iran. Nadir Shah continued to recruit a large number of Indian soldiers to serve in his incessant campaigns. The court of Delhi paid a fixed sum of money to the court of Mashhad to finance Nadir Shah's campaigns. Nadir Shah also initiated the construction of an Afsharid Navy, taking over the Mughal ships and constructing several new ones at ports in India and Iran.

In 1742, he conquered the Khanate of Khiva and forced the Uzbek Khanate of Bukhara to submit to his authority. He launched a punitive campaign against Dagestan, to take revenge for his brother Ebrahim Qoli death on a campaign, a few years ago. An attempt was made on his life in Mazanderan, when an assassin shot at him, he was only lightly wounded. The Dagestan campaign ended in 1745, with Nadir Shah conquering most of Dagestan. Nadir Shah's failing health made him increasingly angry and paranoid. Several noblemen and commoners had to suffer the ever-increasing wrath of the Shah of Iran. In 1746, he began his campaigns in Arabia. The island of Bahrain was captured and the Kingdom of Oman was conquered.

Nadir Shah began his last major military campaign in 1747 against the Ottoman Empire. The Second Iranian-Ottoman War (1747-1750) as it is known, lasted for three years. Despite having a large army at his disposal, including several hundred thousand soldiers from India, the campaign went poorly and ended with the Treaty of Kerden (1750). The Ottomans ceded the city of Najaf to the Afsharid dynasty. Nadir Shah's failing health prevented him from beginning any other major campaigns. He went to India in 1751 and led a small punitive campaign against the Nawab of Benga. Nadir Shah returned to Mashhad in 1753 and ruled over a mostly peaceful Empire until his death in 1756, at the age of 58. 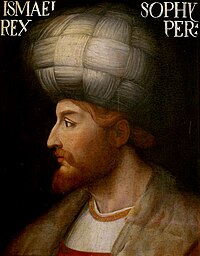 Shah Ismail I, founder of the Safavid dynasty. Portrait by Cristofano dell'Altissimo.

Iran is bounded by natural borders in almost every direction. To the west lays the Zagros Mountains, a long range which stretches from the coastline to the northwestern border with Turkey. The Persian Gulf and the Gulf of Oman comprises almost all of Iran's southern border. Iran's boundary with India is the Indus River and Pamir Mountains, while the country's northern border follows the Oxus River. Iran is one of the world's most mountainous countries, consisting of the aforementioned Zagros Mountains, the Caucasus, the Kopet Dag, the Alborz, and the Hindu Kush. The interior of the country is dominated by the Iranian Plateau, which extends for over 2,000 km (1,248 miles). 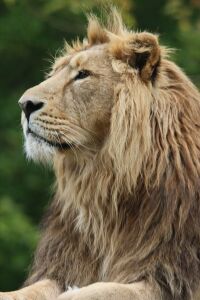 An Asiatic lion, the national animal of Iran, in Arzhan National Park. 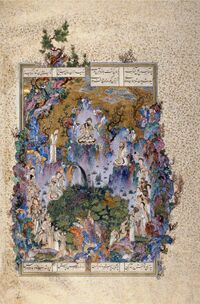 The Court of Keyumars, the first king. Illustration from the Shahnameh of Shah Tahmasp.

Retrieved from "https://wiki.conworlds.org/w/index.php?title=Iran&oldid=69771"
Hidden categories:
Cookies help us deliver our services. By using our services, you agree to our use of cookies.