Kongelige Hæren av Skandinavia (Royal Army of Skandinavia), often abbreviated as Hæren, established in 1951, is the heir of the ancient armies of Denmark and Sweden, dating back to 1509. It is the branch of Forsvaret responsible for land-based military operations and is the largest branch of the armed forces. From 2001, the Hæren has undergone a massive transformation of structures, equipment and training methods, abandoning its traditional role of anti-invasion defence, and instead focusing on worldwide out of area operations.

Hæren currently has a professional strength of 309,000, and approximately 50,000 of the soldiers are foreigners who after an hard period of testing and adaptation are accepted in the service for a period of time that entitles them to citizenship.

Since the formation of Skandinavia, the military has been undergoing a process of integration and modernization not only in equipment but also in their structure and organization. In this process the Hæren has now a simple and effective organization that has an impact on improved effectiveness.

The major operational command is Hærens Hovedkvarter, HaeHV (Army Headquarters). It is located in Christiania and it is split into divisions and subordinate units ranging from brigades to sections. Corps are made up of two or more divisions, but are now unlikely to be deployed as a purely national formation due to the size of the 'Hæren.

There are four subordinated headquarters:

The standard operational units are structured as follows, although various units can have their own structure, conventions, names and sizes.

Given its dependence on Regional Army HQs: 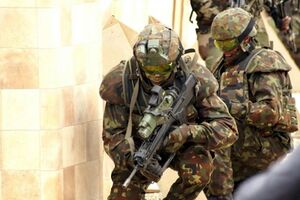 The equipment is autonomous and can be used alone. The NRBC combat clothing is similar to permanent combat clothing. It is designed to allow combat phases to be carried out with the same efficiency as that achieved with conventional combat clothing.

Hæren have selected the Kermel V50 and VMC40 fabrics to equip its troops.

The PEP lies at the heart of the infantry combat system. Designed to utilise all the electronic resources found on the electronic jacket (computer, energy manager, peripheral equipment interfaces, user interfaces), The system is built around a USB 5.0. digital data bus. This choice of open broadband digital data bus and extensive connectivity gives the portable electronic platform, and hence the system, strong interoperability.

Peripheral equipment can be connected to the physical connection ports situated at the front of the battery units. Power sources will be made of two fuel cells, provided partially by NAtech group.

BOFORS AK 5C remain the infantryman’s basic weapon. FN Minimi and other weapons can accommodate a telescopic night sight with no need for changes.

BOFORS AK 5C accommodates a man-machine interface, a second grip and a telescopic sight. The sight is equipped with a day imager and a night imager (the infantryman’s sight will be light intensifying, and one soldier per squad will have a thermal sight: uncooled IR), a restitution eyepiece, a clear sight for instinctive shooting. The sight has an integrated video camera that transmits received images to the system. A wire connection links the weapon to the system.

Precision rifle sight is based on the use of uncooled infrared sensors, combined with adapted magnifying optics. It also includes radio communication resources.

The helmet is composed of three components: head protection, communication headset and optronic equipment. The ballistic shell optimises protection and load-bearing ergonomics (weight distribution). It can accommodate various items required for the mission (facial protection screens) and its shape is compatible with all firing positions of the weapons used.

A lightweight, integrated protective shield protects the infantryman from various threats (wind, rain, dust, UV). Non-linear earplugs afford auditory protection. The NBC mask can be equipped with a filter cartridge or linked to the ventilation powerpack. A tube built into the NBC mask can be used to take in liquids (water, food).

The communication headset is linked to the radio. It holds the microphone and earpiece and works by bone vibrations (bone conduction transducer). It works independently from the helmet and can therefore remain in operation when the helmet is removed.

The optronic equipment is composed of mission interface overshell integrating the optronics, head camera (EBCMOS light intensification technology), image display units (OLED technology) allowing data and icons transmitted on the bus system to be displayed, images and video coming from the weapon or the head camera. The image display unit is fixed to the helmet: its screen can be brought into line with infantryman's eye. When not in use, it can be folded away so as not to hinder the soldier.

The information network allows information to be shared throughout the infantry section. Each radio can subscribe to two networks simultaneously. This offers the squad leader some flexibility in organising communication networks in his section. Each network has an audio conference channel, with priority given to the squad leader, an alert channel from the infantryman to his leader, and a data transmission channel. Voice and data transmission is based on tried and tested satellite communication. Each sub-network works from a base carried by the squad leader. As information network sets are all identical, a soldier can replace his commander if necessary by configuring his set as base. The radio is configured by the soldier computer, thereby limiting the number of control buttons needed on the set. 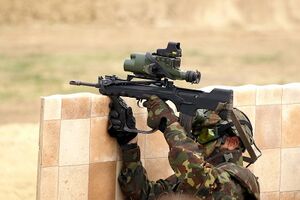 The TIS is made up of software supported by the computer, a man-machine interface and a communication interface box connected to a PR4G VS4 portable radio set.

Based on uncooled IR technology.

The weapon and subsidiary systems are transported and stored in a Storm iM3220 plastic moulded carry case with foam cut-outs designed for each part.

Kits have a common structure and are designed for easy integration into modern vehicles, where they provide the power supply for the mounted soldiers’ systems.

Retrieved from "https://wiki.conworlds.org/w/index.php?title=Royal_Army_of_Skandinavia&oldid=46688"
Categories:
Hidden category:
Cookies help us deliver our services. By using our services, you agree to our use of cookies.