Kongelige Sjøforsvaret av Skandinavia (Royal Navy of Skandinavia), often abbreviated as Sjøforsvaret, is the branch of Forsvaret responsible for naval operations. Until 2001 the navy also includes the Kystvakt (Coast Guard) wich missions are now carried by the Kongelige Gendarmeri.

The current role of Sjøforsvaret is to protect Skandinavian interests at home and abroad, executing the foreign and defence policies of His Majesty's Government through the exercise of military effect, diplomatic activities and other activities in support of these objectives. These objectives are delivered via a number of core capabilities:

Since the formation of the nation, the military has been undergoing a process of integration and modernization not only in equipment but also in their structure and organization. In this process Sjøforsvaret has now a simple and effective organization that has an impact on improved effectiveness.

The major operational command is Sjøforsvaret Hovedkvarter (Navy Headquarters). It is located at Haakonsvern Orlogsstasjon, in Bergen municipality and all the Sjøforsvaret units are under its command.

The Sjøforsvaret is structured as follows: 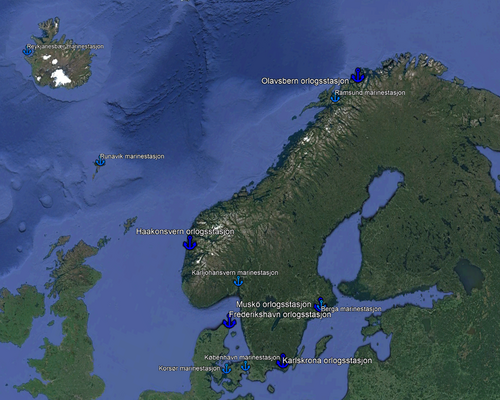 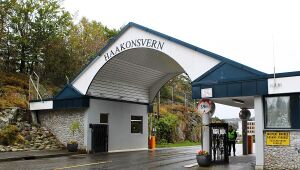 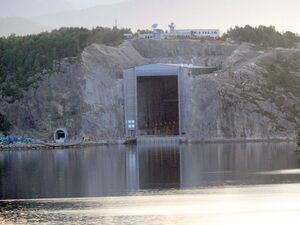 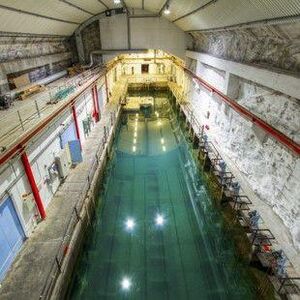 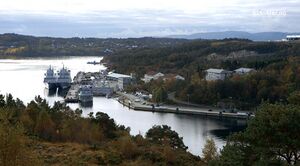 In order to effectively carry out the tasks entrusted to it, the Sjøforsvaret is always immersed in the development of new ships and weapons that keep it at the forefront of technology. Together with FLOSK and Forsvarsforskningsagentur, the Sjøforsvaret is working on the following projects:

Skandinavian Vorma Class carriers, KSS Frigg and KSS Freyja, are ex-Sierran Kitty Hawk class designed in the 60's and manufactured in the 70's. Even if they were fully upgraded at Skandinavian standars at the end of the 90's, its original construction has always conditioned its operability and suitability for the missions that had been beset. Keeping them operational during the last years has not been easy and has meant an important disbursement that in the end has motivated that since 2015 only one of the two is in active service.

In 2008 the different agencies participating in the project began to study the need for a new aircraft carrier if the Sjøforsvaret wanted to continue guaranteeing its capabilities. Again the option of adapting a more modern foreign design was raised, but the possibility was soon ruled out because the designs of "accessible" countries did not match the needs of the Sjøforsvaret. At that time the British and French were working on the joint development of a new aircraft carrier (although France would abandon the project shortly after) that best suited the operational needs of the navy. Some contacts were maintained although the possibility of joining the project was finally abandoned mainly because the British, now alone in the project, opted for a STOVL configuration instead of CATOBAR that was more in line with the requirements of the Sjøforsvaret. At the end of 2009 the options to maintain the projection capacity of the Sjøforsvaret beyond 2020 only left open the door of a national design for the new aircraft carrier. Finally in February 2010, the King signed a decree calling for a national consortium of companies to design the new Skandinavian aircraft carrier. The permanence of availability that had characterized the Skandinavian naval doctrine since the 90's would not be possible with a single carrier, so a second aircraft carrier would have to be built in the project.

In March 2011, the consortium Skandinaviske Hangarskip 2020 led by Aker Yards and Odense Staalskibsværft submitted the first proposals to the Sjøforsvaret according with its specifications. The question of choosing the propulsion was the main topic in the preliminary discussions. The choice of a CATOBAR configuration that allowed to use a naval version of the Saab 39 Gripen was a mandatory specification, which conditioned the ship's energy needs to be able to operate the catapults. On the other hand, there was the choice of the catapult system, since the configuration of fully electric propulsion that had been a constant in the navy ships forced the use of electromagnetic catapults because they lack a boiler capable of producing steam to be used in the traditional steam catapults. All these considerations led to the option of nuclear propulsion for the new aircraft carrier. The experience with the Eirik Raude Class Nuclear Powered Submarine made ASEA to be involved in the Skandinaviske Hangarskip 2020 consortium and finally on July 2012 the final proposal was went to the Sjøforsvaret.

With the Galdhøpiggen Class Destroyers (ex Spruance) retirement planned for 2024, the Sjøforsvaret started a program for the new destroyer class in 2014. With the experience acquired with the StanFlex modular system, a new Destroyer class was designed between 2012 and 2014. The coincidence of this project with that of the new aircraft carrier added an extra difficulty to the project, since the main shipyards were already involved in a large-scale project. The standardization of the StanFlex system allowed to accelerate the construction and to make smaller shipyards participants in the project, so that the new ships were ready in the planned deadlines.

Although the current F/A 18 Super Hornet are planned to have an operational life until at least 2025, the navy began to study its replacement at the same time that the future aircraft carrier was being planned. Although some options were considered, especially the new F-35, it was decided to adapt the design of the Saab 39 Gripen to a navalized version. This solution would allow for greater standardization of systems and budget savings in the medium and long term.

Retrieved from "https://wiki.conworlds.org/w/index.php?title=Royal_Navy_of_Skandinavia&oldid=39322"
Categories:
Hidden category:
Cookies help us deliver our services. By using our services, you agree to our use of cookies.