Protector Remote Weapon Station (RWS) is a remotely controlled weapon station for light and medium calibre weapons and can be mounted on any type of platform. It was developed by Kongsberg of Skandinavia to protect armored vehicles without exposing the vehicle's crew to enemy fire and it has been in full scale production since December 2001. Since then more than 17,000 systems have been sold to 37 nations.

Protector was developed to protect armored vehicles without exposing the vehicle's crew to enemy fire. Such a system enables the crew to effectively operate the weapon and sensor systems of the WCS well protected under armor. The Protector has been designed to integrate light and medium-caliber guns as well as missile and grenade launchers. The weapon station consists of a sophisticated weapon tower featuring electro-optical sights and allows the system to be operated from inside the vehicle with a high degree of precision to protect the gunner from beeing exposed. The system consists of a stabilized firing platform, a fire-control system and control grips. Several weapons can be mounted to the platform and the system also features 4 M6 Smoke Grenade Dischargers. 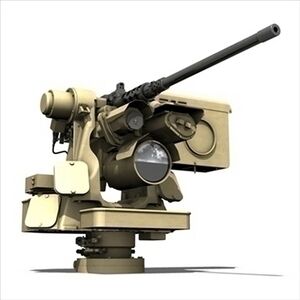 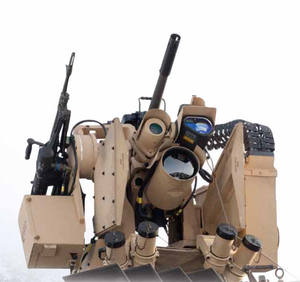 M151 PROTECTOR is designed for small and medium caliber weapons, and can be installed on any type of platform.

Identical to M151 with extended functionality:

Extensive commomality with PROTECTOR M151. The result of this gives retained reliability and accuracy.

Optimized for low weight and versatile

The medium caliber automatic cannon and coaxial machine gun combined with optional non-lethal effects provides the vehicle crew the necessary tools to engage in a wide spectrum of situations and to conduct Escalation of Force. The availability of having two ammunition types simultaneously gives the flexibility to configure the system to engage both soft and hard targets beyond 3,000 meters. A Commander’s sight solution, based on the PROTECTOR RWS family, gives the commander an independent surveillance and lethal/non-lethal engagement capability and enables a two way hunter/killer capability.

The coaxial weapon is on the same axis as the main gun, and the system automatically compensates for the parallell axis between the sights and the axis.

Retrieved from "https://wiki.conworlds.org/w/index.php?title=Kongsberg_Protector_RWS&oldid=34240"
Categories:
Hidden category:
Cookies help us deliver our services. By using our services, you agree to our use of cookies.