This organization is part of the Altverse universe.

The League of Nations (abbreviated LN) is an intergovernmental organization established on January 10, 1920 by the Treaty of Versailles as a direct result from the Paris Peace Conference. It was the first international organization of its kind whose principal mission was to promote and preserve world peace. Following the aftermath of World War II, the LN was restructured to address its ineffectiveness to prevent the conflict of World War II. It has also expanded its outreach and mission goals to include protecting human rights, delivering humanitarian aid, providing arbitration between member states, promoting sustainable development, bringing criminal justice, protecting indigenous rights, and upholding international law. The headquarters and central organizational complex of the LN is situated in Porciúncula and enjoys extraterritorial status. Additional office buildings are located in Beijing, New York City, Geneva, and Tokyo. The main objectives and mission for the LN is to promote international peace, to defend human rights, to encourage economic prosperity and growth, and to provide humanitarian relief in cases of conflict, famine, natural disasters, and other crises. It is the largest, most internationally recognized, most powerful, and most extensive international organization in the world. At its founding, 46 had member states, and its membership has since expanded to 189 member states as of 2019.

The League was founded on the principles of world peace, collective security, human rights, and respect for national sovereignty, which are all enshrined in the League's Covenant. Prior to World War II, the League relied heavily on the military power of the First World War Allies (France, Italy, Japan, Sierra, the United Commonwealth, and the United Kingdom) on enforcing international law and sanctions issued by the League. It was unable to prevent the onset of World War II, most notably when it failed to prevent Russia from invading Finland, the Japanese invasion of Manchuria, and the onset of the Second Italo-Ethiopian War, and the Nazi invasion of Poland. During World War II, the League maintained an active, albeit muted role in advocating world peace, although it became a mouthpiece for the Allied Powers. After the war ended, the League underwent significant restructuring through the adoption of a new covenant. Major reforms were undertaken to increase compliance among member states and the effectiveness of the League's aims and goals. By the 1980s, its mission on peacekeeping was eclipsed by its expansion on economic and social development programs. At the end of the Cold War, the League of Nation's scope of activities, operations, and missions expanded significantly beyond its original purpose.

The LN is composed of four main bodies: the League of Nations Secretariat (the executive body), the General Assembly (main deliberative body), the Parliamentary Assembly (the consultative body), and the Security Council (focused on security and peace resolutions). Other bodies include the Economic and Social Council, International Court of Justice, World Bank, World Health and Food Organization, and the Secretariat. The LN is led by the Secretary-General who oversees the administration of the LN, serves as its spokesperson, and presides over General Assembly meetings. The Secretary-General, the leader of the League of Nations, is appointed every 5 years, with Cisplatine Mário Cavaco Barroso serving since 2017.

The desire to create a peaceful organization enjoining the nations of the world has been evident as early as 1775 in Immanuel Kant's Perpetual Peace: A Philosophical Sketch which promoted a league of nations working together in peace and resolving conflict. Kant argued that each state would be free and respect both citizens and foreigners as fellow rational beings and establish a peaceful community short of an actual world government. An actual instance of such multinational organizations after Kant's time emerged as the Concert of Europe following the conclusion of the Napoleonic Wars in the 19th century. At this time, international law began to develop as the first Geneva Conventions were signed and ratified, and the Hague Conventions of 1899 and 1907 signed to regulate war and peace negotiations in international disputes.

The immediate predecessor to the League of Nations was the Inter-Parliamentary Union, an organization that was initially intended to arbitrate conflicts between sovereign states. The IPU consisted of members of Parliaments from each of the member states. Annual conferences were held to review and refine the process of international arbitration. Elements of the IPU would later be used as the basis for the League of Nations Parliamentary Assembly. 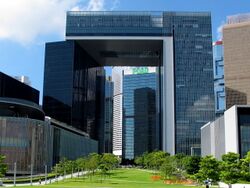 The League of Nations General Assembly and Security Council convene daily at the main building complex in Porciúncula, Sierra.

189 sovereign states have membership within the League of Nations. There are two non-member observer states: the Holy See and Palestine. The Sovereign Military Order of Malta and the Order of Córdoba are non-state sovereign entities which enjoy observer status in the League. Hainan and Taiwan, as the Republic of China, is not a member of the League but it currently participates in a number of LN agencies and bodies under the name, "Chinese Taipei" as a compromise with China's One-China policy.