Parliament Building, the seat of Parliament in Porciúncula

This is a list of capital cities in the Kingdom of Sierra, including places that serve or formerly served as federal, provincial, state, territorial, colonial, and Amerindian reservation capitals. It does not include county seats.

Porciúncula has been Sierra's national capital since 1868, succeeding San Francisco City, the nation's original capital. Sierra's predecessor state, California, had several capitals during its ten-year existence as an independent republic, including Sacramento, Sonoma, Vallejo, and Monterey.

Capitals of the Kingdom of Sierra[edit | edit source] 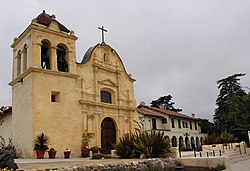 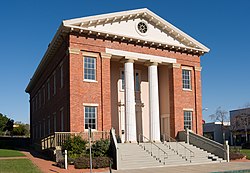 The Benicia Capitol in Benicia, Tahoe

The 20 PSAs (purple) whose capital is also the PSA's largest city.

The dates listed in the following table indicate the year in which the city started to continuously serve as the PSA's sole capital. Most PSAs have changed their capital city at least once.

Two of Sierra's constituent countries, Hawaii and the Deseret, were once de jure sovereign states with diplomatic recognition from the international community.

During its history as a sovereign nation (the State of the Deseret, 1849–1868), three sites served as the capital of the Deseret:

Retrieved from "https://wiki.conworlds.org/w/index.php?title=List_of_capitals_in_the_Kingdom_of_Sierra&oldid=132047"
Categories:
Cookies help us deliver our services. By using our services, you agree to our use of cookies.