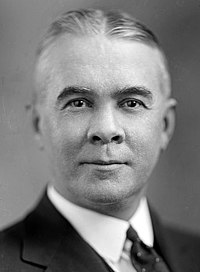 Edwin Menlo, the one who first codified the reform

The English Rerd Rework, popularly known as the Menlo Reform, is an English spelling reform proposal advocated by Kalșerian linguist and journalist Edwin Menlo (born Menlough). It calls for a variety of changes, most of which related to streamlining spelling and getting English closer to a 1:1 correspondence, and also includes some syntactic and pronunciation changes.

Since 1927, it is the co-official manner of writing English in Kalșeri.

In 1920, while working for the Evalria Inquirer, Menlough reported the dissolution of the Simplified Spelling Board, an American board whose aim was to simplify written English, founded in 1906 with the financial support of Andrew Carnegie. Intrigued by the Board, he obtained the Handbook of Simplified Spelling and studied it. In a successive article, he deemed the efforts of the defunct organization to be "good-intentioned and wise, but sometimes lacking" and proposed an amendment to the guidelines of the SSB, changing some rules and adding new individual cases. He first thought of creating a script that would fit for English, but later abandoned the project.

Three years after the publication of the article, Menlough simplified his own surname to "Menlo" and codified his reform into the English Rerd Anewal, a book containing all the changes in the English language he deemed necessary to reach an "acceptable" standard of correspondence. To answer questions and complaints about the Reformed spelling, Menlo formed the Isent Rerd Bord ("Simplified Language Board") in 1925 and started conducting experiments with the help of the University of Evalria.

In 1927, the results of the experiments were published, and it was revealed that the Menlo spelling was indeed beneficial to book publishers and those learning English; the prestigious endorsement led to the High Council passing a bill to make the Reform a co-official spelling of English in Kalșeri. Driven by the success of the Reform, Menlo founded the Taims o' Kalsheri, a newspaper written entirely in Reformed spelling; publication was halted during the Rovuan presidency and resumed after he was deposed. In 1948, upon Edwin Menlo's death, his son Edwin II took over the role of President of the Bord and Editor-in-chief of the Taims o' Kalsheri, which he would retain until his death in 1991. The current holder of both charges is Edwin Menlo III, Edwin's grandson.

In 1991, after decades of quarrelling and attempted removal of the Reform from state employment, President Phil Garner issued an executive order in which he proclaimed that the Menlo Reform was just as valid as the traditional spelling, and banned punitive actions by the Government for using either form of written communications.

The reform also disallows the presence of unpaired words and cranberry morphemes of Germanic origin. Under this provision, new words are introduced, such as:

In the Reform, Menlo also suggests to avoid using words ultimately derived from Latin or Greek in non-specialized speech, unless there is no Anglo-Saxon word that can fully replace the "foreign" word. For this, he suggests bringing back Old English or Middle English words that were displaced by "foreign" words, such as rerd for "language" and baispel for "example".

The publication of the English Rerd Anewal generated controversy almost immediately: supporters of the reform argued that it saved costs and made learning English easier, while detractors denounced the reform as a merciless attack on a long-established manner of communication. Initial sources of complaint included the "deeper" changes and the letter Û, which was absent in most typewriters sold in Kalșeri; to keep the distinction between U and Û, Menlo suggested "loaning" the Kalhan letter Ú, which could be typed through the use of a dead key.

The Reform is still a point of contention among experts and the general population. Several bills have been proposed before the High Council to end government support of the Menlo Reform, most notably in 1961: the bill already head President James H. Lockney's backing, but was defeated 59 to 87, with 42 High Councillors either abstaining or absent. Lockney commented on the event, saying: "I can understand wanting to fix some glaring irregularities in English. Heck, I would do it. But no one should be expected to blindly accept the new spelling."

In 1991, several High Councillors criticized Garner's executive order that equated the Menlo Reform to the traditional spelling, with Former Governor-General and High Councillor for Cape Sundervale Garry Halford labelling Garner as "suffering from linguocidal tendencies". Supporters of the Reform counter-attacked, defining any attempt to undo the Reform to be either "misinformed" or "stubborn". Phil Garner addressed the uproar by stating that "[he] just declared support for the reform, not banished the traditional spelling. People need to stop being so anal about it." One year later, Garner signed into law a bill that would remove penalties for teachers who refused to teach the Menlo Reform in schools, while also making the schools hand a free copy of the Reform book, as well as a free copy of the Charter, to every first-year student.

Reception from the parties is not universal: the Social Cooperationists, Liberal Democrats and Libertarians have not adopted an official position, with the last of the three leaving an official "choice on the matter", while the BIP has successfully petitoned the Government to exempt Cape Sundervale from the requirement of teaching the Menlo Reform.

Retrieved from "https://wiki.conworlds.org/w/index.php?title=Menlo_Reform&oldid=57531"
Categories:
Cookies help us deliver our services. By using our services, you agree to our use of cookies.