This country is a part of Altverse II.

Mexico, officially known as the Mexican Social Republic (Spanish: República Social de México) is a federal semi-presidential constitutional republic in southern North America. It borders Brazoria and the Kingdom of Sierra to the north; Tarasca to the west; the Pacific Ocean to the southwest and south; the Gulf of Mexico to the east; and Belize, Guatemala, and the Caribbean Sea to the southeast. It is the most populous Spanish-speaking country in the world, and the second largest in Latin America, with a population of over 120 million. It is a federation composed of 22 states and a federal district (Mexico City), that is also its most populous city and its capital. The Valley of Mexico and the vicinity is home to the majority of Mexican citizens, with the Mexico City megapolis accounting for nearly one-fourth of the country's entire population.

Prior to the arrival of the Europeans, Mexico was home to various advanced Mesoamerican civilizations including the Olmec, the Maya and the Aztec, which engaged in active trade, cooperation, and warfare. In 1521, the Spanish Empire conquered and colonized Mexico, administering the conquered lands under the Viceroyalty of New Spain. New Spain became an important asset to Spain, allowing the Spaniards to expand into other parts of the Americas. The Catholic Church played a significant role in the spread and proliferation of Christianity and the Spanish language in Mexico. The syncretic fusion between Spaniard culture and the indigenous cultures led to the formation of a distinct Mexican identity. Mexico was one of Spain's most valuable possessions and was economically exploited for its large deposits of precious metals. After three centuries of Spanish rule, Mexico declared and gained independence from Spain in 1821. Following independence, Mexico experienced a highly volatile political environment, with frequent political changes, and widespread economic problems. Mexico lost over half of its territory during the Mexican-American War to Brazoria and California (which would become Sierra) with the assistance of their ally, the United States.

After the war, Mexico continued to be plagued with internal and international conflict, and several more political changes. The Mexican state instituted reforms that curtailed the power and influence of the Church and military, and granted more rights to the indigenous peoples in the Constitution of 1857. These changes triggered the Reform War and the subsequent French intervention in Mexico, which saw the installation of Maximilian von Habsburg as Emperor of Mexico. After the Republicans' chief ally, the United States, collapsed amid the War of Contingency, the French increased its military support for Maximilian I, while Austria also joined the intervention, which proved successful in putting down the Republican opposition. Under Maximilian's rule, he implemented a limited constitutional monarchy with a democratically elected parliament. The postwar civilian government came under the control of former liberal Republican war general Porfirio Díaz, who was offered high position and status in the imperial government. Díaz's government implemented reforms which strengthened and centralized state power, and attracted investment from Europe and Anglo-America. Mexico enjoyed rapid economic growth and urban development, although the benefits of social and financial progress was unevenly distributed throughout Mexico. The imperial government continued to face occasional rebellions, especially in the northern states.

Following the death of Maximilian I and mounting dissent against Díaz, the country experienced a decade-long civil war that saw the interventions of Sierra and the Landonist United Commonwealth. The revolution ended with the dissolution of the Mexican Empire and the division of Mexico into two client states: a pro-Sierran North Mexico and a pro-Continental South Mexico. Despite brief reprieve in conflict, the two states resumed fighting during the 1920s in the First Mesoamerican War, and eventually, South Mexico, with the assistance of the United Commonwealth, reunified virtually all of Mexico during Great War I. Mexico underwent major land reforms and Continentalist economic policies which redistributed the wealth. By the 1950s, Mexico's ambitions to reassert control over formerly Mexican lands in El Norte and Central America alienated the United Commonwealth, leading to a split between their leaderships, and Mexico aligning itself more closely with China. Separatist, ethnic-based unrest in the Yucatán and Pacific states led to the Second Mesoamerican War during the 1970s, which saw the creation of the Sierran-backed Republic of Tarasca. Mexico began to move towards liberalization by the 1980s, eventually culminating into full Delandonization during the Revolutions of 2000.

The Mexican economy ranks as the 17th largest by nominal GDP and the 16th largest purchasing power parity in 2017. It has a relatively high standard of living and is a newly industrialized country with a upper middle-income economy. It is a member of the League of Nations (LN), the International Monetary Fund (IMF), the World Bank, the World Trade Organization (WTO), the G28, the Asia-Pacific Economic Cooperation (APEC), the Organisation of Economic Co-operation and Development (OCED), and the Organization of American States (OAS). It is a founding member of the American Cooperation Organization (ACO) and is a former member of the Conference of American States (CAS). Emerging from a predominantly agriculturally-based economy, the modern Mexican economy is diversified with large sectors in services, technology, oil, finance, energy, trade, and industry. Mexico has one of the largest standing militaries in the world (with over 700,000 on active duty) and the second largest paramilitary force in the Western Hemisphere (with 480,000), behind the United Commonwealth. The development of Mexico's domestic nuclear program has been the subject of international concern and opposition from its neighbors. Tensions between Mexico and its Anglo-American neighbors, particularly with Sierra, has led to a steady deterioration in relations. Mexico's withdrawal from the CAS, its increased militarization, its nuclear program, and its revived irredentist movement has led to the controversially imposed sanctions by the Anglo-American community. 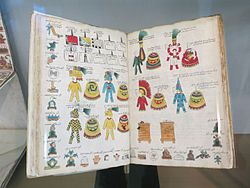 The first page of the Codex Mendoza depicting the founding of Mexico-Tenochtitlan.

The name, México (originally spelled as Mexico without the accented letter I) is the Spanish transliteration of the Nahuatl word, Mēxihco, the name used by the Aztecs to describe the ancient heartland of the Aztec Empire in the Valley of Mexico and its people, the Mexica. The name was adopted by the Spaniards when Mexico was organized into one of the territories of New Spain. The name has a long and complex history, with various possible origins and forms. In Nahuatl, the suffix, –co indicates a place name. It has been hypothesized that the name Mexico may have derived from Mextli (Mēxihtli), a "secret name" of the Aztec god of war, Huitzilopochtli. Under this scheme, the name of Mēxihco would mean, the "Place where Huitzilopochtli lives". Other theories include the suggestion that Mēxihco was a portmanteau of the Aztec words Mētztli (moon) and xīctli (navel), which would mean Mēxihco means "Place at the Center of the Moon", a possible reference to the location of the Aztec capital, Tenochtitlan in Lake Texcoco. The lakes that were connected to Lake Texcoco also formed the shape of the head of a rabbit, an animal commonly associated with the moon in Aztec culture.

The official name of Mexico is the "Mexican Social Republic" (Spanish: República Social de México), which is codified in the current Constitution of Mexico. Prior to the adoption of its current official name, Mexico has had a history of various iterations of its official names. Its official name has changed based on its form of government.

The earliest documented and verifiable occurrence of humans appearing in Mexico is around 23,000 years ago. Starting from 7000 BC, Paleo-Indian hunter-gatherers succeeded in domesticating and cultivating the maize crop and beans. Consequently, villages and communes arose from this agricultural revolution and various cultures arose. Between 15000 BC to 700 AD, farming societies evolved into more complex chiefdoms where social stratification became more pronounced with rigid separate classes of people based on profession and religious standing. The most prominent civilizations that existed during this time included the Olmec and Mayans.

According to the Fifth Constitution of the Mexican Social Republic, the country is a federation and a semi-presidential republic, which recognizes the President as the head of state and the Prime Minister as the head of government. The constitution was approved by voters on April 30, 1987 during the presidency of Miguel Zamora Sandoval. The revisions made to the constitution gave substantial powers to the Prime Minister and Parliament, shifting power away from the Presidency.

Mexico is divided into three primary levels of governance: federal, state, and municipal. All constituent states of Mexico are co-equal components of Mexico which exercise a significant degree of autonomy guaranteed by the constitution. Both the federal and state governments share overlapping responsibilities, powers, and duties, as well as retain distinct, separate powers from one another. The Constitution mandates that all state governments adopt the same form of republicanism utilized by the federal government, but allows it to create its own constitutions, laws, and courts independent of the federal government. The federal government itself is divided into three branches: the executive, the legislative, and the judicial. The separation of powers is enshrined in the Mexican Constitution to ensure that a system of checks and balances exist.

The executive branch is currently led by President Pablo Hidalgo de Veracruz and Prime Minister José Rosario Macias, both of whom are members of the Mexican Unity Party (Partido de Unidad Mexicana), the governing party of Mexico.

The Mexican Armed Forces is the standing armed forces of Mexico and is divided into three branches; the army, navy and the air force. The navy has both the naval infantry and Maritime Search and Rescue division. The armed forces itself had went through major reforms during the 1980s and 90s, but suffered a major decline in the 2000s as a result of both the 2001 Mexican financial crisis and the 2008 global recession. Since 2013, the Mexican Armed Forces has been the subject of much needed reform and the need was intensified with the 2015 Emergency Mobilization Plan which has been ongoing since its implementation. The Mexican Armed Forces have participated in many League of Nations peacekeeping operations, but have been accused of being the personal force of President Veracruz, especially the special forces.

Since the ascension of Veracruz to power as President of Mexico, his regime has help facilitate a major cult of personality surrounding Veracruz and has been compared to the cult of personality in the 1940s and 50s in the Manchu People's Republic. The cult of personality surrounding Veracruz depicts him as the savior and sole protector of Mexico and the only one keeping the country a sovereign and independent state from Sierran and Brazorian imperialism. Propaganda in the form of posters, state-run media broadcasts and even political education programs have helped promote the image of Veracruz as a benevolent defender of Mexican sovereignty and has been criticized by human rights organizations and international observers as helping maintain an authoritarian government and is used to justify censorship and suppression of dissent.

Retrieved from "https://wiki.conworlds.org/w/index.php?title=Mexico&oldid=69457"
Categories:
Hidden categories:
Cookies help us deliver our services. By using our services, you agree to our use of cookies.