The Kingdom of Sierra Ministry of Foreign Affairs, often referred to as simply the Ministry of Foreign Affairs or abbreviated as MIFA, is the Cabinet-level ministry in the Government of Sierra that manages and oversees the diplomatic and consular relations of Sierra. Its primary responsibility is to advise the Prime Minister on international affairs and foreign policy issues, who exercises the Queen's royal prerogative on Her Royal Majesty's behalf. It is also responsible for negotiating treaties and agreements with other powers, representing Sierra in international organizations (including the League of Nations and the Conference of American States), defending Sierran interests and citizens, supporting Sierran financial development and investment abroad, promoting Sierra's international trade, and providing humanitarian assistance to other countries. The Ministry is the oldest Cabinet-level ministry and was founded on November 27, 1858.

The Ministry is headquartered at the Mark Culler Building located at 430 N Broadway, Porciúncula, Gold Coast, 10000 in the Grand Park Center. The Ministry operates over 50 child agencies and departments, and is responsible for implementing the foreign policy of the Kingdom of Sierra. It derives its authority from Her Royal Majesty through delegation of her royal prerogative vis-à-vis foreign relations and it is accountable to the Privy Council. The Ministry's leadership, headed by the Minister of Foreign Affairs, reports to Her Royal Majesty's Government on all matters relating to foreign affairs and diplomatic efforts. The Ministry receives most of its funding from the House Committee of Appropriations' Subcommittee on Defense, Foreign Affairs, and Justice and is regulated by the Senate and House Committees on Foreign Relations and Title 14 of the Sierra Federal Code.

The Constitution of Sierra declares that the foreign policy matters are one of the royal prerogatives of the Queen, which she normally confers onto the Prime Minister, who runs Her Royal Majesty's Government. The Ministry of Foreign Affairs serves as the paramount agency within the civilian executive branch on all issues pertaining to diplomatic affairs and foreign policy, and is led by the Minister of Foreign Affairs, who serves as the principal foreign advisor to the Prime Minister on such matters. The role and responsibilities of the Ministry are wide-ranging but are chiefly concerned with developing and implementing the Prime Minister and Parliament's foreign policy. In addition, it is responsible for rendering service and assistance to Sierran nationals and businesses abroad, cultivating ties with foreign nations, overseeing and regulating Sierra's diplomatic and consular staff, combatting against international crime and terrorism, informing and educating the Sierran public on travel safety and protection (through travel safety advisories and other vital information), coordinating and providing support for other Sierran government agencies abroad (including official state visits), promoting commercial and trade interests of Sierra in the international market, providing security for Sierran government officials and diplomatic staff abroad, and conducting research on foreign policy issues.

In order to carry out these functions and operations, the Ministry of Foreign Affairs employs a large civilian workforce, that includes professional, technical, and administrative staff, and maintains an internal bureaucratic system. High-ranking positions are given out based on the Ministry's own civil service examinations, which assesses potential candidates over a variety of skills including verbal communication, writing, and technical knowledge. Employees can work abroad as foreign service personnel in Sierra's international system of embassies and consular services, or at home to provide logistical support, compile and analyze documents, and process information ready for use by the Ministry. The Ministry works closely with other government ministries and agencies, especially the Ministry of Defense, which coordinate together on formulating foreign and military policies.

The Ministry is responsible for creating and providing passports, visas, and other travel documents to Sierran citizens, nationals, and foreign travelers. It also processes international adoptions, international marriages, foreign student applications, temporary foreign worker permits, and other matters. The Ministry has played a major role in framing Sierra's immigration policy and works with Parliament on such matters. It also controls and oversees Sierra's nationality laws and naturalization policy. Sierra's Border Patrol Services fall under the direct jurisdiction of the Ministry of Foreign Affairs and is thus empowered to prevent illegal immigrants, terrorists, and international criminals from entering or remaining in Sierra. The Ministry is also responsible for securing the safety of Sierran citizens in other countries, and representing them on their behalf and negotiating with responsible, competent judicial authorities in instances where Sierran nationals have been detained or imprisoned in other countries due to local criminal charges. The Ministry also provides vehicle registration for diplomats of foreign countries with diplomatic immunity and ensure their overall safety during their residency in Sierra.

For cultural and social interests, the Ministry of Foreign Affairs works together with the Ministry of Culture to promote Sierra's cultural exports abroad and other programs designed to connect Sierrans with other peoples throughout the world. The Ministry maintains an international scholarship and endowment program to encourage foreign students to attend Sierra's universities, and sponsors a variety of programs that allows Sierran students and young adults to travel abroad for general purposes, academic studies, humanitarian work, or official business.

In 2017, the Ministry of Foreign Affairs had a discretionary budget totaling $18.8 billion (KSD), with a further $2.1 billion adjustment in 2018 and $3.5 billion for overseas contingencies. The budget represents the sixth-highest allocation of budgetary resources in the federal government (excluding all functions and services associated with the Monarchy), and includes finances used to purchase foreign arms and military-related development services on behalf of the Ministry of Defense. The Ministry of Foreign Affair's annual financial report, as prepared by the Office of Budget and Planning, and reviewed by the Ministry's Internal Audit Office, indicated that actual costs were at $16.6 billion for the year 2017. The Ministry generated revenues of $2.2 billion through consular and management services.

The Ministry's independent auditors are the Lewis & Sons, a private CPA firm which works exclusively with the Ministry of Foreign Affairs and other Cabinet-level ministries. It has worked closely with the Ministry in improving financial reporting and addressing internal weaknesses on fiscal accountability. In 2015, after ten years of non-compliances, the Ministry was placed under a program for audit readiness.

The Ministry of Foreign Affairs has established presence in every LN member state except with Bhutan, Iran, and North Vietnam, and maintains embassies and consulates in the following: 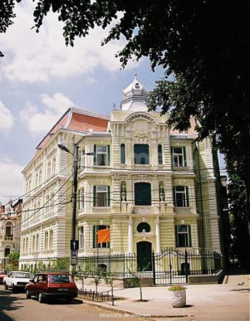 Embassy of Sierra, Temeschburg (The Banat)

The organization and functions of the Ministry of Foreign Affairs are defined in Title 14 of the Sierra Federal Code.

Other significant legislation related to the Ministry of Foreign Affairs and its children agencies include:

Retrieved from "https://wiki.conworlds.org/w/index.php?title=Ministry_of_Foreign_Affairs_(Sierra)&oldid=28596"
Categories:
Hidden category:
Cookies help us deliver our services. By using our services, you agree to our use of cookies.