Monarchism in the Kingdom of Sierra

Monarchism in the Kingdom of Sierra is a social, political and ideological movement in the Kingdom of Sierra that advocates on behalf of the monarchy. The movement advocates and raises awareness of the monarchy to protect it as the main governing institution of the country as well as to preserve the monarchy as a legitimate institution against movements that question it, mainly republicanism. Generally, the Sierran public is tolerant of the monarchy, but most don't harbor anti-republican sentiment and many often push for a compromise in the form of a crowned republic. The monarchist movement is both social and political and has its roots in the earliest days of Sierran history and rose to political power when the Royalist Party was first elected in 1858 and has maintained itself as the status quo of Sierran politics since 1877. Sierran monarchism is meant to defend and argue in favor of the monarchy and why the institution is both important in contemporary Sierran society and why it should remain in place.

Monarchism is also aligned with conservatism in Sierra due to both movements stressing the importance of tradition as well as monarchists using the argument that the monarchy is a tradition in Sierra and is one that the majority of the Sierran people support. The monarchist movement is best represented in the Royalist Party whose platform consists of policies that align in favor of the monarchist movement and is meant to protect it at all costs. The majority of monarchist organizations are political and social, with many cultural groups existing and a small, but decently growing fringe sect known as radical monarchism has appeared in recent years as a reactionary force to the rise of the dissident republican movement. 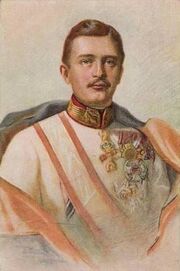 Charles I of Sierra is viewed as a unifying symbol by monarchists.

In the Kingdom of Sierra, monarchists are those that support the monarchy and its role as the ruling institution over the Sierran government and the monarch as the country's official head of state. Sierran monarchists support the constitutional monarchy and view the monarchy and the House of Columbia as symbols of unity and peace citing the chaos of the later years of the California Republic and the stability brought under the government of Charles I of Sierra as evidence of the monarchy's role as vital to Sierran society and politics. The Constitutional Convention of 1857 is an event cited by monarchists as evidence for the monarchy's role as a stabilizing force since the monarchy was accepted by the convention and Charles I had allowed debate between monarchists and federalists over what system of government California, later Sierra, should have. Monarchists also view the monarchy as an institution that is compatible with democracy citing that while Charles I was acting prime minister, he used his position as de-facto leader of the country to bring stability and peace and actively avoided becoming a dictator despite having the opportunity to do so.

In the present day, the monarchist movement is well represented by the Royalist Party which champions the monarchy and has been actively defending it since the party's foundation in 1858. The Royalist Party hold the belief that the monarchy is a unifying force and believe that replacing it with a republic would only bring instability and unrest to Sierra and doom the union to collapse. While the California Republic is cited by monarchists as why a monarchy is a necessary alternative to a republic, the collapse of the United States in 1865 in the subsequent War of Contingency is another example of how a republican-style government could doom the Sierra citing how the United States was bitterly divided, lacked a unifying figure to keep the country together towards its later years and would eventually dissolve and collapse into civil war and violence. Once Sierra intervened in the war and sent troops to fight the Union, now the United Commonwealth, the monarchy was viewed as an institution capable of projecting Sierran military power and protecting the nation.

Retrieved from "https://wiki.conworlds.org/w/index.php?title=Monarchism_in_the_Kingdom_of_Sierra&oldid=136649"
Categories:
Hidden category:
Cookies help us deliver our services. By using our services, you agree to our use of cookies.