The Muspelheim Class aircraft carrier is

Skandinavian Vorma Class carriers, KSS Frigg and KSS Freyja, are ex-Sierran Kitty Hawk class designed in the 60's and manufactured in the 70's. Even if they were fully upgraded at Skandinavian standars at the end of the 90's, its original construction has always conditioned its operability and suitability for the missions that had been beset. Keeping them operational during the last years has not been easy and has meant an important disbursement that in the end has motivated that since 2015 only one of the two is in active service.

In 2008 the different agencies participating in the project began to study the need for a new aircraft carrier if the Sjøforsvaret wanted to continue guaranteeing its capabilities. Again the option of adapting a more modern foreign design was raised, but the possibility was soon ruled out because the designs of "accessible" countries did not match the needs of the Sjøforsvaret. At that time the British and French were working on the joint development of a new aircraft carrier (although France would abandon the project shortly after) that best suited the operational needs of the navy. Some contacts were maintained although the possibility of joining the project was finally abandoned mainly because the British, now alone in the project, opted for a STOVL configuration instead of CATOBAR that was more in line with the requirements of the Sjøforsvaret. At the end of 2009 the options to maintain the projection capacity of the Sjøforsvaret beyond 2020 only left open the door of a national design for the new aircraft carrier. Finally in February 2010, the King signed a decree calling for a national consortium of companies to design the new Skandinavian aircraft carrier. The permanence of availability that had characterized the Skandinavian naval doctrine since the 90's would not be possible with a single carrier, so a second aircraft carrier would have to be built in the project. 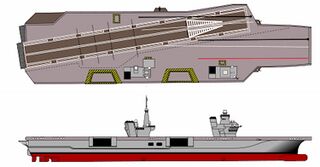 Front view of the KKS Muspelheim

In March 2011, the consortium Skandinaviske Hangarskip 2020 led by Aker Yards and Odense Staalskibsværft submitted the first proposals to the Sjøforsvaret according with its specifications. The question of choosing the propulsion was the main topic in the preliminary discussions. The choice of a CATOBAR configuration that allowed to use a naval version of the Saab 39 Gripen was a mandatory specification, which conditioned the ship's energy needs to be able to operate the catapults. On the other hand, there was the choice of the catapult system, since the configuration of fully electric propulsion that had been a constant in the navy ships forced the use of electromagnetic catapults because they lack a boiler capable of producing steam to be used in the traditional steam catapults. All these considerations led to the option of nuclear propulsion for the new aircraft carrier. The experience with the Eirik Raude Class Nuclear Powered Submarine made ASEA to be involved in the Skandinaviske Hangarskip 2020 consortium and finally on July 2012 the final proposal was went to the Sjøforsvaret.

According with the Forsvarsdepartementet, the build cost of the two carriers was 30,263 million KKroner (5,710 million dollars), and operational costs up to March 2021 were estimated at 3.376 million KKroner (637,000 dollars) yearly. 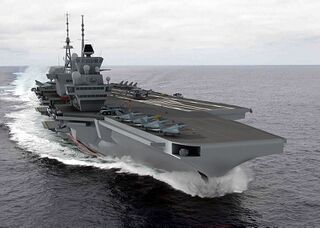 Front view of the KKS Muspelheim

One of the most important premises in the design was to get a minimum crew to operate the ship. The ships' company is 770, rising to 1,990 when the air crew is added. This means a reduction of at least 40% from the Vorma Class.

Similar to the British desigh, Muspelheim Class contains two superstructures nstead of a single island superstructure. The ships have operations divided between two structures, with the forward island for navigation and the aft island for controlling flying operations. The primary reason for having twin islands was to space out the funnels, as the ships were designed with redundancy with "duplicated main and secondary machinery in two complexes with independent uptakes and downtakes in each of the two islands", while the alternative of consolidating all the exhaust trunkings would have reduced hangar space as well as increasing the vulnerability to flooding. There are also additional benefits to having separate islands rather than a single large island, such as easier construction, reduced wind turbulence, and freed up deck space. Using two structures provides separate mountings for the air surveillance radar (forward), which does not interfere with the medium range radar (aft); furthermore, visibility is improved for both navigation and landing operations.

Muspelheim Class ships are equipped with a Electro-magnetic Catapult (EMCAT) developed jointly by ASEA and the british Converteam. This system is more efficient, smaller, lighter, more powerful, and easier to control than steam catapults. EMCAT's improved control will enable to launch both heavier and lighter aircraft and will reduce the stress on airframes, resulting in less maintenance and longer lifetimes for the aircraft.

Muspelheim Class has a state-of-the-art power generation & propulsion system. In the core of this system is the new ASEA PWR3M nuclear reactors of 260 MW of power. The PWR3M is smaller and simpler, requires fewer crew, and yet is far more powerful than the PWR2M on board of the Eirik Raude Class Submarines. There are two PWR3M reactor in each ship. To complement the power system there are 4 x NAtech NaSoft Fuel Cell 15 MW each.

The ship has ASEA Full Electric Propulsion in which all the power system is used to provide electricity that is later distributed between ship services (confort, systems & armament) and electrical Permanet Magnet Motors to supply the 2 external Pods.

The ASEA Full Electric Propulsion has several advantages including increased freedom of placement of the engines, acoustical decoupling of the engines from the hull which makes the ship less noisy, and a reduction of weight and volume. Reducing acoustic signature is particularly important to avoid detection. 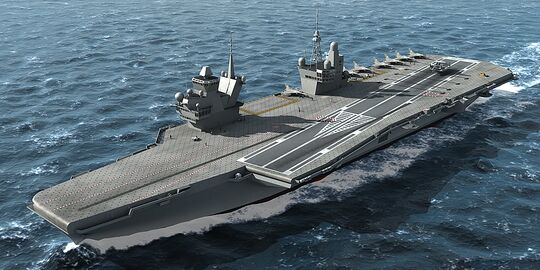 KSS Muspelheim in the North Sea

The Muspelheim class use two main weapon systems. The weapons system of the ships are:

The ships are able to carry more than 70 aircrafts. The 2020 Typical Aircraft wing is formed by:

The ships are named after old norse mythological realms.

Retrieved from "https://wiki.conworlds.org/w/index.php?title=Muspelheim_Class&oldid=38003"
Categories:
Cookies help us deliver our services. By using our services, you agree to our use of cookies.