NASAMS is a distributed and networked medium to long range air-defence system. NASAMS was the first surface-based application for the AIM-120 AMRAAM (Advanced Medium Range Air-to-Air Missile) and the first surface-to-air missile system in the western world with active radar guidance. The missile itself is named SL-AMRAAM (Surfaced Launched AMRAAM). 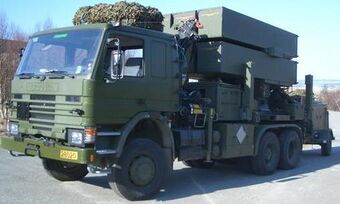 Skandinavian company Kongsberg Defence & Aerospace teamed up with Raytheon and initiated the NASAMS programme as a cooperative effort for the Luftforsvaret . The state-of-the-art network-centric air defence system NASAMS was declared fully operational capable in 1998 but had an initial operational capability as early as in 1994/95.

In addition to Luftforsvaret, NASAMS has been exported to some other countries like, Spain, Chile, Baltic Federation and the Netherlands.

The system integrates a SENTINEL 3D-Radar and AIM-120 AMRAAM missiles with an indigenously developed BMC4I system called FDC, short for Fire Distribution Center. The FDC connected to a TPQ-36A radar forms an "Acquisition Radar and Control System" (ARCS). The missile has a range of up to 25 km.

Kongsberg Defence & Aerospace developed a mid-life update of the NASAMS, called NASAMS II, and the upgraded version was first handed in mid 2006. Full operational capability (FOC) was achieved in 2007. The upgrades consists of: 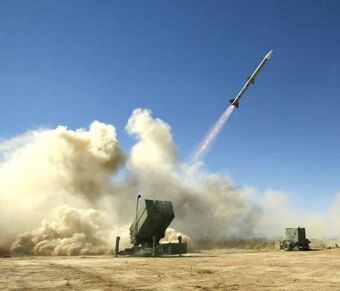 On 22 February 2015, Raytheon announced the development of the Extended Range upgrade to the NASAMS AMRAAM missile offering (AMRAAM-ER). Development work began in 2014, and the missile is actually an Evolved Sea Sparrow Missile using AMRAAM guidance. The first flight test took place in August 2016 and the missiles entered into service along 2018.

Retrieved from "https://wiki.conworlds.org/w/index.php?title=NASAMS&oldid=34308"
Categories:
Hidden category:
Cookies help us deliver our services. By using our services, you agree to our use of cookies.