NLAW (Next Generation Light Anti-tank Weapon) is a short-range fire-and-forget anti-tank missile system. Designed for use by infantry, the MBT LAW is shoulder fired and disposable, firing once before being disposed of. It is the first ever, non-expert, single soldier, short range, anti-tank missile, that rapidly knocks out any Main Battle tank in just one shot by striking it from above. This makes it the true tank killer for light forces that operate dismounted in all environments including built up areas.

The MBT LAW was developed by Saab Dynamics in consolidation with the Forsvarsdepartementet in 2002. The development uses technology derived from the BILL 2 (warhead and guidance), and AT4 CS (confined space capability) systems. It is a soft-launch system, allowing it to be used by infantry from within an enclosed space. In this system, the missile is first launched out of the launcher using a low powered ignition. After the missile travels several meters into flight, its main rocket ignition occurs, which propels the missile from there on, to the target. Guidance is obtained using predicted line of sight (PLOS); for a moving target, the gunner maintains tracking for three seconds, training the missile's guidance electronics to compute the target's angular speed. After launch the missile flies autonomously to the target adjusting the necessary corrections according to the data acquired by the tracking. It is unnecessary for the gunner to consider the range to the target. After launch the missile's position in its trajectory always coincides with the target irrespective of range. 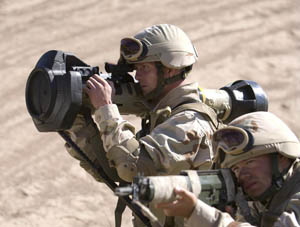 Some of NLAW unique features have been used in other Saab systems and some have been specifically developed for NLAW.

Retrieved from "https://wiki.conworlds.org/w/index.php?title=NLAW&oldid=34315"
Categories:
Hidden category:
Cookies help us deliver our services. By using our services, you agree to our use of cookies.