Pecos Province (Spanish: Provincia Pecos) is one of the 23 provinces of Brazoria. It encompasses both East Albuquerque and El Paso in the west, where it also borders Sierran West New Mexico and Mexican Chihuahua and Coahuilas. Pecos has domestic boundaries with the Provinces of Rio Grande, Llano, and Leon to the east and Comanche and Ute to the north. The provincial capital is Santa Fe while the largest city is Midland-Odessa. Pecos has an estimated population of 1,224,528 as of 2018 and a total land area of 273,000 square kilometers, making it the 13th largest Province by population and the 1st largest by area.

The Midland-Odessa area accounts for about a fifth of the Province's total population and it is the only town conurbation with more than 200,000 people in the entire Province. The provincial population is scattered across many rural towns, with about 82% living in towns with less than 100,000. Other major towns in Pecos include Santa Fe, Roswell, Carlsbad, Las Cruces, and Fort Stockton.

Pecos Province is made up of three informal geographic regions: East New Mexico, Herradura, and West Llano Estacado. Both East New Mexico and Herradura are mostly encompassed by the Chihuahuan Desert, though the latter is characterized as more arid. West Llano Estacado is less arid than both, but more consistently hilly. Ranching and petroleum extraction are the two largest components of the provincial economy. The Permian Basin in the south of the Province is one of the most productive petroleum extracting regions in Brazoria, while northern Pecos is home to a relatively large amount of tourism. 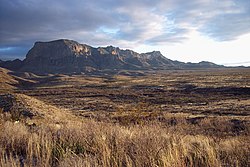 At 273,000 square kilometers, Pecos Province is the largest Brazorian province by land area. The provincial landscape varies slightly by region. East New Mexico and Herradura both contain wide, dry deserts, though the former has less arid wilderness with heavily forested mountain ranges. Pecos is characterized by a generally arid to semiarid climate. There is a provincial average of precipitation of 350 mm, with rainfall peaking in the summer season. Summer temperatures at lower elevations often exceed 100°F, though in more alpine areas typically remain around 78°F. The provincial record high temperature was 122°F in Loving on 27 June 1994, while the provincial record low is -58°F in Arestia on 8 October 1957.

Pecos Province contains four general habitat zones with a wide diversity of plants and animals. The West Llano Estacado is a shortgrass prairie dominated by cultivars such as the blue grama. The Chihuahuan Desert extends through much of East New Mexico and all of Herradura, and it is characterized by its large quantities of creosote. The southern Rocky Mountains run through the center of East New Mexico and range in vegetation according to elevation gradients: pinyon-juniper woodlands persist around the base, with evergreen conifers, spruce-fir and aspen forests, and alpine tundra at higher elevations.

Some of the native wildlife found in the province includes bighorn sheep, bobcats, cougars, coyotes, deer, jackrabbits, javelina, pronghorns, roadrunners, western diamondbacks, Mexican gray wolves, and wild turkeys. In recent years, the Brazorian national government has made efforts to reintroduce North American bison into the West Llano Estacado region, designating a large part of the area in the Pecos-Comanche Provinces as a National Rehabilitation Wilderness.

The Provincial Council held its last elections alongside the national government in 2016. The next elections are scheduled for 2020. In the 2016 elections, the National Party won 19 of the 25 contested seats, and upon the break-up of the National Party in the 2019 elections, these 19 seats were redistributed, with 11 going to the new Moderate Party and 8 to the One Nation Party. Of the six remaining seats, three are possessed by the Christian Democratic Party, two by the Liberty Party, and one by the Worker's Party. As in national elections, provincial elections are party-list and proportional, with parties winning seats depending on the share of the total vote received, after meeting a threshold number of votes which varies according to turnout.

Pecos Province has an estimated population of 1,224,528 people as of 2018, compared to an estimate of 1,222,653 in 2017. The increase of 1,875 people in one year is the third lowest growth rate of any Brazorian province in a year, at only 0.153%. The ethnolinguistic composition of Pecos Province is 61% Latino, 21% Anglo, 14% Aboriginal, and 3% Tejano. Other minority groups compose less than one percent of the provincial population. Spanish is the predominant language in Pecos, and it is the most widely used language across most aspects of provincial society. The most widely practiced religion in Pecos is Christianity, the largest denomination of which is Roman Catholicism. Canaanism is found in more singularly concentrated rural communities in Pecos, with the vast majority Pecoan Canaanites being Sanctionists. Indigenous spiritual practices are found among the Protected Aboriginal Groups of the Western Comanche, the Mescalero Apache, and the Lipan Apache.

Taos Pueblo, the ancestral home of the Taos tribe of Tiwa people. 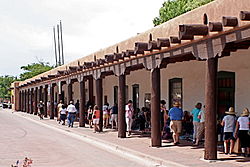 The Spanish colonial Palace of the Governors in Santa Fe.

The local culture of Pecos is influenced by three primary sources, listed in order of influential significance: pre-independence Spanish settlement, later Brazorian colonization, and pre-Columbian indigenous groups. Pecos Province was one of the few Brazorian provinces to possess an already locally established colonial society upon its initial incorporation as a part of the Trans-Grande Territory. The Hispanic culture of Pecos itself was influenced to an extent by the pre-Columbian Puebloan cultures of the Tiwa people and the Mescalero Apache. Modern Pecoan culture is highly reflective of this historical tradition architecturally, linguistically, and socially.

Pecoan cuisine is one of the more representative features of the local culture and its fusionary influences. The provincial cuisine places a large amount of emphasis on endemic spices and herbs, including New Mexico chilis, anise, and piñón. Characteristic dishes include sopapilla, breakfast burritos, and enchilada montada. Another highly representative aspect of Pecoan culture is local architecture, which is mostly built in adobe styles and is heavily influenced by Hispanic and Puebloan sources.

Pecos is a regular Province, meaning that its authority over social services is limited to mere administrative and planning capacities. Due to the highly decentralized nature of the provincial population, medical facilities and schools are typically managed independently by the respective counties, though financial resources are shared from a common provincial allocation. Pecos has one of the lowest rates of school completion in Brazoria, owing to the highly agricultural economy and a high rate of religious exemption claims. Only about 58% of the provincial population is recorded as having completed high school, while only about 19% has taken part in further education. Pecos Province is also nationally infamous for its poor healthcare service. The average EMT wait time in the province was 44 minutes in 2018, the second longest in Brazoria after Comanche Province.

Approximately 19.6% of the population of Pecos Province lives under the poverty line, the fifth largest percentage in Brazoria. The median income in Pecos Province as of 2018 was $31,407.

Retrieved from "https://wiki.conworlds.org/w/index.php?title=Pecos&oldid=190373"
Categories:
Hidden category:
Cookies help us deliver our services. By using our services, you agree to our use of cookies.