Skandinavia has a multi-party system, with three or four major parties complemented by several other significant parties and some other minor parties. The government typically consists of a major party in coalition with, or supported by, a number of smaller parties parties but sometimes, under special circumstances, major parties have formed a coalition government in what is called the "great coalition." No party has won an outright majority since the first elections in 1953. All governments since then have either been one-party minority governments or coalitions between two or more parties.

Traditionally, the Social Democrats and the Conservative Party have been occupying most of the seats, but in recent years the appearance of new parties and the increase in the number of parties with representation is changing that trend.

The Justis- og Sikkerhetdepartementet (Ministry of Justice and Security) registers and validates party names and the official party letters for all parties that participate in national elections. On ballots, the parties are sorted alphabetically by party letter.

Parties represented in the Storting (2019)[edit] 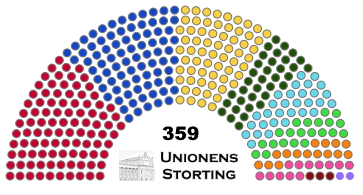 Retrieved from "https://wiki.conworlds.org/w/index.php?title=Political_parties_of_Skandinavia&oldid=36833"
Categories:
Cookies help us deliver our services. By using our services, you agree to our use of cookies.