Prime Minister of the Kingdom of Sierra

The Prime Minister of the Kingdom of Sierra (informally abbreviated to PM) is the head of Her Royal Majesty's Government in Sierra. The Prime Minister is the highest minister of state, the leader of the Cabinet, the Supreme Field Marshal of the Sierran Crown Armed Forces, a ranking member of the Privy Council, and the chairperson of the Executive Council. As head of government, it is the Prime Minister's responsibility to advise the Queen on exercising her royal prerogative and executive powers as prescribed by the Constitution. The office is constitutionally defined, although its modern functions and powers have been established through long-established convention. The Prime Minister also has the responsibility of administering the Executive Office of the Prime Minister, which is the central organization that oversees numerous federal and statutory agencies and boards. As an official possessing fused powers, the premiership has become Sierra's most powerful and influential institution vis-à-vis the Monarchy, Parliament, and the Supreme Court by de facto.

Although there are no explicit requirements or restrictions on who can become prime minister, by convention, historically, all prime ministers have come from either houses of Parliament, though especially from the House of Commons, as long as there was a majority government in the House. In almost all cases beginning in the 20th century, the Prime Minister has always exclusively been the leader of the majority party or the largest party in a coalition in the House of Commons. As the primer inter pares, the Prime Minister is a sitting, voting member in the House of Commons, who may introduce bills and conduct other parliamentary motions in the same manner as their peers. Since the 2012 Prime Ministerial Electoral Selection Method Act, whenever there is a hung parliament (i.e., there is no majority government), the people directly elect the Prime Minister from one of the parties in Parliament, irrespective of existing coalitions. By convention, all prime ministers must be appointed by the Queen, who honors the vote held in Parliament or by the people. Similarly, the Queen can dismiss the Prime Minister at Her Royal Majesty's pleasure, though only when a motion of no confidence passes or when there is a loss of supply.

Since the office's creation in 1858, there have been a total of 32 prime ministers. The current incumbent Prime Minister of Sierra is the Social Democrats' Susan Kwon, who replaced outgoing Royalist Nemesis Heartwell, following the 2020 federal election that took place on May 1.

During times of war, the prime minister assumes the role as the Supreme Field Marshal who is charged with coordinating, organizing, and leading all military operations and movements related to the conflict. Declaring and making peace is an exclusive right reserved for the monarch as a prerogative and as such, the prime minister must first consult and confirm with the monarch of his/her opinion and then receive support by Parliament. In both times of war and peace, the prime minister always has access to Sierra's nuclear codes and may activate them if deemed absolutely necessary.

The prime minister and all other members of the Cabinet must be appointed by the Queen. In practice and by convention, the Queen appoints the Prime Minister based on the individual who is the most likely to receive the support, or confidence, of the majority of the members of the House of Commons. Generally speaking, this is understood to be the leader of the majority party in Parliament, the leader of the largest party in a coalition government, or the leader directly chosen by the general electorate in a hung parliament situation. Selection of other ministers of state is determined by the party or coalition, and must be reviewed and approved by the Senate prior to assuming office. By convention, the Senate always approves these ministers unless extraordinarily compromising circumstances arise during a Senate hearing over a particular individual.

Although there is no legal requirement for the prime minister to be a member of Parliament, it is generally expected that the prime minister hold a seat in the House of Commons in order to fully carry out their dual role as executive and legislator. To date, no prime minister has been elected who was not previously a member of Parliament, and no prime minister has held onto the office longer than three months after they lost their seat in their own constituency. Based on House protocol, prime ministers who have not previously held office may be urged to seek election over an available seat promptly. Hypothetically, a fellow party member presiding over a "safe constituency" would yield their seat for a by-election to enable the prime minister to win and serve in Parliament. Currently, there are few eligibility qualifications for a member to hold office in the House of Commons and they call for the candidate to be:

I do solemnly swear (or affirm) that as the Prime Minister of the Kingdom of Sierra and His/Her Royal Majesty's Representative and Civil Servant to the Sierrans, that I will faithfully execute the powers ascribed upon me by the Constitution. I declare that any and all actions I undertake shall be scrutinized to the fullest extent and that I shall only work in the interests of the People and the State. Ten thousand years, glory, glory to the King/Queen!

The prime minister has the optional choice of adding in the following phrase at the end of his/her oath: So help me God (or Providence). If a monarch was officially declared dead by the state coroner within seven days of the prime minister's inauguration, the oath's end is modified to say, "...Ten thousand years, the King/Queen is dead, glory, glory to the King/Queen...".

Traditionally, about two weeks after a general election, the prime minister holds an inaugural address, regardless if they were newly appointed or have continued to serve as the incumbent, before the country at the front steps of Parliament Building, detailing their plan for the government and their goals as the leader of the government.

The term of office for the prime minister has no fixed length or time limit. The prime minister serves at Her Royal Majesty's pleasure, and remains in office as long as they are able to maintain the confidence of the majority of members in the House of Commons, if they resign, if they are dismissed, or if they die. The only other method of the prime minister's removal from office is impeachment, which is a stronger form of dismissal that entails formal prosecution by Parliament against alleged crimes committed by the prime minister during their tenure.

The lifespan of Parliament has been limited to a maximum of five years after the last general election, although in practice, the time between the formation and dissolution of Parliament is often much shorter than this. Whenever Parliament requires dissolution, the prime minister must submit a formal writ of election, requesting the Queen to allow an election to take place within a speedily prompt manner. Following parliamentary dissolution, members of Parliament continue to serve in their capacity as members, but are heavily limited in what they can do. The prime minister and all other members of the House must run in the general election in order to maintain a seat in the House. The goal of every incumbent prime minister is to ensure that their party or coalition maintains a plurality or majority in the House, in order to continue as a government. Should the prime minister's party lose enough seats to yield a minority, and a coalition cannot be formed in a timely manner, the leader of the new largest party wins. Should neither be the case, and there is a hung parliament, it is possible for the Queen to hold a special prime ministerial election, whereby one of the party leaders within the new House is to be chosen by the people as the new prime minister. 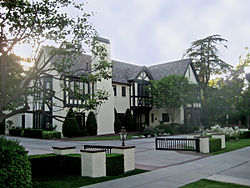 The Getty House, the official residence of the Prime Minister.

The prime minister enjoys an annual salary of $500,000, $50,000 personal expense account, $100,000 travel account, and $30,000 for miscellaneous spending. In addition, the prime minister is provided residence at the Getty House Estate and may utilize all its facilities and services at his/her pleasure. State dinners, official visits, and other public functions are funded by the government but all other expenses including food and laundry must be paid out of the prime minister's finances.

The prime minister has unrestricted access to the Occidental Palace, the official residence of the monarch, as well as several government-owned country retreats throughout Sierra. A guest room within the Palace is readily available personally for the prime minister and his/her family whenever visiting the monarch.

The prime minister, his/her family, and personal guests receive continuous protection from the Secret Service and continue receiving protection up to 20 years after exiting office. Under special circumstances, this post-office protection may be extended unto former prime ministers at the discretion of the current prime minister. In the case of a severe national emergency, the prime minister can be brought to any of the undisclosed amount of heavily guarded secret locations throughout Sierra to continue normal government operations.

A personal set of coat of arms and standard may be commissioned by the prime minister during their administration for his/her use, and may receive titles from the peerage system by the Monarch with the expressed approval of the Parliament.

The incumbent ministry under Susan Kwon has been in government since May 4, 2020.

Prime ministers who have been regarded positively during their tenures generally continue their legacy after leaving office. Almost universally, approval ratings for former prime ministers are higher than they were during their service. Without the responsibilities or scrutiny associated with the prime ministerial profession, former prime ministers have well-established images and credibility, allowing them to enter into any field in society. Prior to the extortion scandal that brought impeachment and then imprisonment upon former prime minister Kovrov Stoyanovich, Stoyanovich had relatively positive ratings. Following his release from prison in 1997, Stoyanovich rebuilt his image by dedicating a life to humanitarian concerns by traveling around the world. His charity work and promotion of global peace allowed former critics to overlook his scandal and praise him for his work. A major, recent exception is Daniel McComb, who resigned in 2017 amid mounting sexual abuse allegations made against him by former staff and associates. McComb, who is under an ongoing investigation by the federal government and Parliament, left office with lower than 11% approval ratings, the lowest in the history of post-ministry ratings for Sierran prime ministers.

When former prime ministers pass away, a state funeral is held in honor and recognition of their service. Their body is laid in state beneath the Rotunda of the Parliament Building for about a week before buried at their's or their family's desired location. Considered a solemn event, the entire procession itself is managed jointly between the Sierran Crown Armed Forces and members of the Parliament, reaffirming national solidarity with the prime ministerial office. The event is considered an obligatory ceremony that the Sierran royal family must attend. The last state funeral held for a prime minister was for former prime minister Leslie Steele (2021) who died of natural causes at the age of 88.

Retrieved from "https://wiki.conworlds.org/w/index.php?title=Prime_Minister_of_the_Kingdom_of_Sierra&oldid=136123"
Categories:
Hidden categories:
Cookies help us deliver our services. By using our services, you agree to our use of cookies.