Rauma Class is a class of mine-countermeasure vessels currently in use by the Sjøforsvaret. Built between 1992 and 1997 as 5 Alta Class minesweeper and 4 Oksøy Class mine hunter, six ships of the class were given a comprehensive midlife upgrade between 2007 and 2010, which resulted in KSS Rauma becoming the lead ship of the newly upgraded class of MCMVs. After the upgrade, the Sjøforsvaret expects that it will serve on for another 15 to 20 years. The new ships of the Rauma Class no longer distinguish between minehunters and mineswepers and are all classified as mine countermeasures vessels.

The role of the Rauma Class is primarily mine hunting. Its secondary role is minesweeping, where it can act as a command and control platform for unmanned influence sweep drones or by towing a mechanical sweep after the vessel. Unlike single-role mine hunters, the Rauma Class was conceived as a multi-purpose vessel, able to perform various mine warfare tasks and also to engage in anti-submarine warfare (ASW). 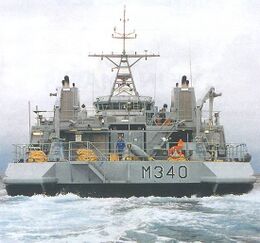 The vessels are of catamaran design, the hull is constructed from a fibre-reinforced plastic sandwich. An air cushion between the two hulls is created as the catamaran moves through the water. The catamaran structure gives a high transit speed to the area of operations, low magnetic and acoustic signatures and low susceptibility to the shock of exploding mines.

For minesweeping, the ships are equipped with traditional mechanic sweep, a Kongsberg AGATE (Air Gun and Transducer Equipment) acoustic minesweeping system and magnetic sweepers. AGATE generates the acoustic signature of any ship in order to trigger acoustic mines. It uses airguns to generate low frequency sound and transducers to generate the medium and high frequency sections of the noise signature. Minesweeper mini torpedoes can be carried.

The ships also can serve as a command and control platform for unmanned minesweeping drones. The system includes the Kongsberg HUGIN 1000 autonomous underwater vehicle (AUV). It is based on HUGIN AUVs in commercial use for offshore oil and gas surveying. HUGIN 1000 has an operating depth down to 1,000m and has an advanced Kalman filter-based aided inertial navigation system (AINS). The AUV can carry payload sensors including synthetic aperture sonar (SAS) or side-scan sonar, multibeam echo sounder, sub-bottom profiler, conductivity, temperature and depth (CTD) sensor, volume search sonar and a high-resolution interferometer SAS sonar system.

Although the previous classes had a diesel propulsion, in the Rauma Class they have been replaced by a totally electric propulsion with two NAtech Fuel Cells that delivers a total power of 6 MW coupled to two NAtech Marine hydrojets mounted externally to the main hull. The electricity for motors and electronic systems is supplied by the power system.

For minesweeping and minehunting, the Rauma Class is equipped with a mechanical sweep and serves as a command and control platform for unmanned minesweeping drones.

Retrieved from "https://wiki.conworlds.org/w/index.php?title=Rauma_Class&oldid=37918"
Categories:
Cookies help us deliver our services. By using our services, you agree to our use of cookies.