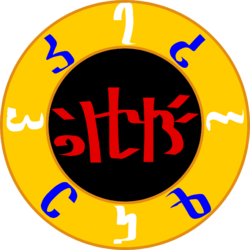 Y'Ornyn, a wheel which depicts the name and the eight attributes of Mondion

Rydil is a Grelyssian-based monotheistic religion centered on the traditional beliefs and practices of the Grelyssians and the worship of Mondion, the religion's supreme deity. Followers of Rydil are known as "Dilórnyns" (derived from the Grelyssian term Dilórnyn for "followers of the Wheel"). The religion has its origins to proto-Grelyssian religion which emphasized belief in animistic spirits and ancestor worship, that gradually evolved into a complex system of polytheism, starting in the 12th century BCY. Mondion, a storm god, was one of the numerous deities that worshipped by the proto-Grelyssians, including the Hedralian Empire. During the Nianian conquest of Grelyssia, the Grelyssian Dilórnyns began developing a written canon (the Cwenga) that comprised the religion's central scriptures, based on previously orally transmitted stories and myths, known as the Dendras. The tradition of oral transmission of the Dendras continued alongside the transcription of Rydilist mythology until the two were formally adopted by the Court of Mawynn in the 14th century, after the Cyrasians, a group of ethnic Grelyssians, migrated out of Niani and returned to Grelyssia, to the present-day Cyrumas.

Within contemporary Rydil is a diverse variety of movements and schools of thought, the majority of which adhere to the monotheistic theology of Mondion. Central to Dilórnyn is the belief of God as an immanent, eternal being whose will and power is expressed through the balance of nature and humanity. Dilórnyn believe that Mondion has given special favorability to the Children of Grelyssia, signified through their observance and faith in Mondion's law and grace. Dilórnyn believe all of humanity share a common and universal purpose as God's creation, and must be cleaved together with nature in order to overcome evil and suffering. It teaches that God is coeternal with the Truth, a separate cosmic force which sustains and nourishes the Universe. Rydil asserts that the world can be divided into at least four spheres: the material or natural (Earth), the spiritual (the underworld), the metaphysical (where the Truth resides), and the essential (where God Mondion resides), all of which are configured harmoniously to compose the Universe in its entirety. Some sects posit the existence of a fifth sphere, the Darkness (everything outside the Universe). Dilórnyns assert that humanity embodies all of the four main spheres of the Universe, but must reconcile the contradictions between each of the four in order to achieve full peace and unity with God and the Universe.

Retrieved from "https://wiki.conworlds.org/w/index.php?title=Rydil&oldid=41878"
Categories:
Cookies help us deliver our services. By using our services, you agree to our use of cookies.