São Leopoldo is a federal republic following the presidential system. The President is the both head of state and head of government as well. The national legislature is the National Council, which divided into two chambers: Senate (upper house) and Chamber of Deputies (lower house).

Before the Portuguese colonization, it was already inhabited by the Indian tribes while the first European explorers arrived. The colonization was started when the Spanish and Portuguese Jesuits arrived and they converted the Indians into Catholicism. The Germans settled the country when it was a part of Brazil in 1824. After the Ragamuffin War, the country declared independence from Brazil and it was unrecognized until 1853. The Italians settled the country in 1875 and most of them are originated from Northern Italy.

São Leopoldo is a member of Conference of American States and League of Nations.

Before it's discovery by European explorers, São Leopoldo was inhabited by multiple indigenous hunter-gatherer tribes, who subsisted on a combination of hunting, fishing, and gathering. These tribes would act as individual city-states, conducting trade, war, and diplomacy with each other. Some notable tribes were Guarini and Charnia, who were one of the first Leopoldean tribes to make contact with European explorers.

The Portuguese were the first to discovery São Leopoldo, colonizing it as apart of Colonial Brazil. Along with Portuguese settlers, Spanish Jesuits traveled to São Leopoldo to convert the indigenous Leopoldeans, who followed animistic and native religions. Many jesuits lived among the natives and converted many. For decades, both Spain and Portugal dispute over the region, with both nations claiming as apart of their own colonial territories. This prompted the Portuguese King to encourage increased Portuguese settlement in the area, resulting in a population boom.

A house of German Settlers in Nova Alemanha.

At that time, Germany was suffering the effects of war against Napoleon, overpopulation, and poverty in the countryside. Many Germans were willing to immigrate in Brazil and São Leopoldo (it was a part of Brazil at that time). Brazilian Empress Maria Leopoldina encouraged the immigration of Germans in imperial Brazil. The first German immigrants prior the country's independence was happened in 1822 after Brazil gained independence from Portugal. The first immigrants arrived in 1824, settling the city of São Leopoldo (now known as Nova Alemanha).

Calls for independence would continue to rise after the end of the Ragamuffin War and the independence of the Riograndese and Juliana republics. Inspired by the republic's endeavors against the increasingly hostile and authoritative Empire of Brazil, the people of São Leopoldo declared unilateral independence from the Empire on March 1st, 1845, to the great dismay of the Brazillian government. The first capital city of the country was in Piratini. Ignazio Pereira became the president of the country while Sevastian Dias became the vice president. During Pereria presidency, the country was only recognized by Britian, France, and Uruguay (the same countries that regocnized by Riograndese republic). Despite acting as a self-governing entity, São Leopoldo would not be recognized as a country by the Empire of Brazil until December 19th, 1853. On the same date, the State of Paraná, which was orignally under Brazillian control, was seperated from the Empire and joined São Leopoldo. After Pereria ended his term on the same year, Sevastian Dias became president while Reinaldo Barros became vice president.

In 1854, nine years after São Leopoldo officially became an independent country, Uruguay was annexed by the country when the two governments signed the Treaty of Artigas so that it became a province of Cisplatina. Former Uruguayan President Juan Francisco Giró became the first state president of Cisplatina.

In 1931, Getúlio Vargas became the President of São Leopoldo when his opponent Antônio Salgado was overthrown after the Leopoldean Revolution. Initially Salgado won the election, but Vargas and some of his supporters were in disagreement of this. In response, the Leopoldean Revolution happened three weeks before what was supposed to be inaguration of Salgado. After the revolution happened, the coup d'etat happened in the country for two weeks and it was ruled by military officers from the Leopoldean Army.

Geographically, São Leopoldo is bordered by Brazil to the north, Paraguay and Argentina to the west, and Uruguay to the south, and Atlantic Ocean to the east. It is located on the eastern coast of South America. It has a total area of approximately 576,409.6 square miles (222,553 km²), of which TBD percent is water or TBD square miles (TBD km2).

São Leopoldo is a federal presidential constitutional democracy which serves as the foundation of the executive, legislative, and judicial branches. The president is the head of state and also the head of government. He/she is also considered as a commander in-chief in Leopoldean Armed Forces. The vice president will become a head of the cabinet and the presider of the legislative houses. The government of the country is bicameral and it is divided into two houses: Senate (upper house) and Chamber of Deputies (lower house). The Senate has 38 members, four for each federal states. They are elected directly by the people using plural voting. The Chamber of Deputies has TBD members. There are two deputies per districts, and both of the two legislative houses have no term limits.

São Leopoldo is composed of 13 federal states, 1 capital state, and 2 dependencies. The Distrito Federal is located at the capital city of the country. The head of state of every federal states is the Governor whie the deputy head of state is the Vice Governor. Each states have their own unicameral legislatives but all of the states have elected their legislators statewide-at-large and the legislators can be also the member of the executive branch of the federal states. 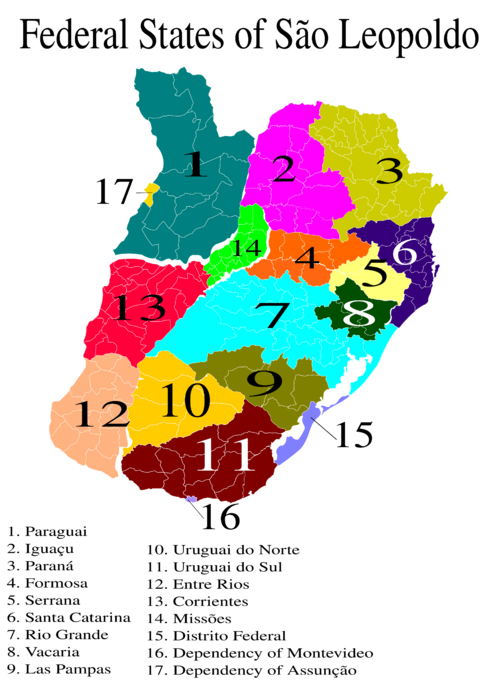 The Iguazu Falls is the most populat tourist destination of the country.

Many people around the world visited the Iguazu Falls in the state of Iguaçu and it is the most popular destination for foreign tourists who came to São Leopoldo for pleasure. The country is the home of São Miguel das Missões, where tourists can see the 17th century Spanish Jesuit mission ruins and it was the one of the World Heritage Sites. The Rota Romântica is the scenic tourist route that exhibits the diverse German culture and they can visit to Caminhos da Colônia is als the scenic route that exhibits the diverse Italian culture. Both Rota Romântica and Caminhos da Colônia are popular in the states of Rio Grande and Vacaria. The Paleorotta Geopark in the state of Rio Grande is the home of paleontological tourism in the country where many fossils of the Permian and Triassic periodare displayed there.

Portuguese and Spanish are the official languages of the country. Portuguese is the first language of Eastern Leopoldean region while Spanish is the first language of Western Leopoldean region. Among the 14 states and 3 special units of the country, only the two Uruguaian provinces and the dependency of Montevideo that both Portuguese and Spanish are the first languages. The minor languages of the country are the Hunsrückisch German dialect, Venetian, Yiddish, Japanese, Dutch, Polich, Ukrainian, Guarani, and Kaingang. In 1992, Guarani became the official language of the states of Paraguai and Corrientes, and dependency of Assunção under the Guarani Language Act and it was implemented under the presidency of Victória Andrada.

Most of the people in the country are Christians with Roman Catholic having the most adherents while Avignon Catholic is the second most popular church in the country. The Igreja Independente Soberana de São Leopoldo is considered as a state church but it is not the official church of the country in the Leopoldean Constitution. Protestants and other Christian religions have the least population among the Christian groups. The fewer population of the people are irreligious and followers of non-Cristian groups such as Spiritism, Buddhism, Judaism, Islam, and many others.

In higher education, the students must take the national entrance exam before entering to a prominent colleges and universities. If a student didn't passed the exam, he or she will not chose to study in prominent schools but they can still study in other colleges. The Leopoldean standard for bachelor's degree is awarded in most areas of the arts, humanities, social sciences, businesses, or natural sciences.

STL, Rede Sul, CTR, and RTVA are the four major television networks in the country. Over 10 million Leopoldeans are subscribed to cable, satellite, or other modes of television broadcasting. They are also enjoying watching telenovelas from neighboring countries such as Argentina and Brazil. 5 million Leopoldeans are listening to the radio and most of the audiences are ages 18-30 years old in music and 40 years old and above in news. The telenovelas from Central America are very popular in the country and it has the most number of percentage of Centroamerican fans outside the globe and the telenovelas are either dubbed in Portuguese or it has an original Spanish sound with Portuguese subtitles. The Leopoldean telenovelas have also a big widespread popularity in the country and the most popular telenovelas of the country are ''Família Gonçalves'', ''Três Marias'', and ''Eu Te Amo, Amanhã''.

The five major Portuguese newspapers in São Leopoldo are Correio Leopoldense, Arauto Nacional, Gazeta Alegre, Diário do Sul, and Jornal da Estrela and the five major Spanish newspapers in São Leopoldo Leopoldeano Noticias, El Dia Atlantico, Nación Azul, Diario del Sur and Mundo Begonia while the four major magazine in the country are Atlântico, Nova, Leia Hoje, and Revista do Sul. The newspapers and magazines in the country can help to share some exclusive updates from the daily lives of every Leopoldeans. Most of the people that are reading newspapers are ages 30 years old and above while some people at ags 13-25 years old are enjoying upon reading magazines.

The music of the country are mixed with Brazilian and Argentinian music and it can be also influenced by African, European, and Amerindian forms. Tango and cambonde are popular in the Spanish dominating states while samba and bossa nova are popular in the Portuguese dominating state. Other Western-influenced music such as pop, R&B, soul, rock, hip-hop, rap, classical music, disco, and gospel are also popular to the country especially to the younger audiences. The four major record labels in the country are Luar Records, Begônia Records, Universo Music (owned by Universal Music Group), and Pedra Records (owned by Warner Music Group).

Football is the most popular sports in São Leopoldo and many people in all ages can play the said sport so that it became the national sport of the country. Volleyball and basketball is also popular in the country.

Retrieved from "https://wiki.conworlds.org/w/index.php?title=São_Leopoldo&oldid=60182"
Categories:
Hidden category:
Cookies help us deliver our services. By using our services, you agree to our use of cookies.