The SEP modular armoured vehicle (Splitterbeskyttet Enhetsplattform), Dano-norwegian for "Fragmentation Protected Standard Platform", is a hybrid multifuel-electric powered armoured fighting vehicle developed by BOFORS Hägglunds AS. The vehicle is codenamed "Thor". The first demonstration models were produced in 2010 (tracked) and 2011 (wheeled). It was originally designed to meet the requirements asked by the by the FLOSK but also with the intention of making it an attractive product for export.

SEP vehicles must be capable, modular, flexible and upgradeable. To satisfy these requirements, SEP’s innovative and advanced design has been based on the principles of commonality, flexibility and upgradeability, enabling a wide range of functions and roles on a uniform basic platform.

Development work on the SEP began in 2006. The first SEP-track demonstrator was delivered to the FLOSK in November 2008 for trials and evaluation and by 2009 the vehicle had covered over 2,000 km in various trials. FLOSK placed a contract on BOFORS Hägglunds AS for the development of the wheeled version of SEP in November 2009 and a wheeled 6×6 variant prototype demonstrator, SEP-W6, was delivered in 2010. In 2010, FLOSK placed a risk reduction contract on BOFORS Hägglunds AS involving the construction of a second tracked SEP testbed vehicle. This vehicle was rolled out in february 2011.

A contract for final development was placed by FLOSK in July 2012. A total of six vehicles 2 SEP-W6, 2 SEP-T and 2 SEP-W8 had tu be built under this new contract. After two years of intense tests on all types of land and conditions, FLOSK finally approved the purchase of the vehicle that began to be manufactured in 2016 with an order of 400 units between the different variants for the 2016-2020 period.

SEP’s versatility enables it to replace a wide range of armored vehicles including command and control, personnel carriers, all-terrain logistics vehicles, sensor platforms, repair & recovery vehicles, ambulances and light combat vehicles. Meeting future requirements means making use of the latest technological developments. SEP features advanced stealth technology, including a battery power option which enables the vehicle to run in silent mode. The vehicle is equipped with data bus-based vehicle electronics and optronics for driving and surveillance. High levels of protection are offered as standard and reliability and ease of maintenance have been built in from the outset. The relocation of the engine and drive line into the sponsons creates a unique crew space that extends, uninterrupted, throughout the length of the vehicle. This permit next generation levels of fightability, habitability, command and control.

The vehicle uses a new electronic architecture, VETEC, developed by BOFORS Hägglunds AS and Kongsberg, based on an open scalable, fault-tolerant databus which manages all the on-board systems and the crew interfaces including the weapons systems, battlefield management, defensive aids suite, built-in test, digital radio communications and other mission or role-specific systems.

The crew stations each occupy 0.35m³ of the available hull space. The crew stations and the SEP man-machine interface were developed under a collaborative venture by BOFORS Hägglunds AS and Kongsberg. 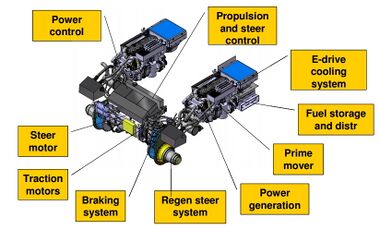 SEP uses two commercially available Scania XSI-8 V6 Multifuel diesel engines of 295 hp (220 kW) each. The engines are placed in the sponsons of the vehicle. This gives the advantage of a totally clear central volume of the vehicle, compared with traditional designs built with large, centrally mounted engine compartment. Each engine is coupled to a 7 speed automatic transmission, driving a separate alternator generating 150 amperes. Both engines drive an electric transmission, powering each wheel by a 100 kW maximum power permanent magnet, in-hub electric motors developed by ASEA. The motors are fitted with a two speed reduction gear. This design offers high redundancy and survivability when operating in combat conditions. Fuel cells and batteries are mounted on the floor in different sizes and configurations depending on the variant and role.

The tracked version SEP-T is fitted with special rubber bandtracks (already used with BvS10) rather than conventional steel link tracks. These tracks are lighter, quieter and have a operational life of about twice that of an equivalent steel linked track. The new bandtracks have a lower rolling resistance and are operating more efficiently with the electric transmission systems, yielding higher fuel efficiency. Another unique design feature is the underframe mounted suspension. This spaced outer layer gives improved protection against mines. The use of bandtracks and decoupling the suspension from the side frames and hull dramatically reduces internal noise level to as low as 85dB, which is sufficiently low to meet civilian vehicle noise requirements.

The electric drive vehicle has greatly improved stealth characteristics in terms of thermal and acoustic signatures as well as low visual and radar signatures. Combining fuel cells and batteries SEP can reach up to 200 km in full electric mode. In the tracked version SEP-T, the continuous rubber band tracks are much quieter and lighter than conventional steel tracks. 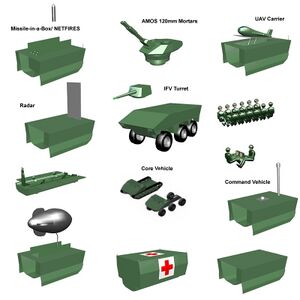 The modular design of the SEP allows the vehicle to be configured for 24 different roles including:

The mission or role-specific modules can be fitted on both the SEP track and SEP wheel vehicle base units. Plug-in building blocks have been used, allowing fast adaptation and quick upgrades as new technologies become available. The vehicles are capable of operation in a many different types of terrain and in a wide range of climatic conditions.

High emphasis has been laid in the SEP development to establish as much system and component commonality as possible within the different variants and the "role module", i.e. the unit on the vehicle that has the specific role equipment, is without any modifications replaceable between the tracked and wheeled variants of SEP. To realize this in a weight, volume and cost efficient way, electric transmission has been selected as most suitable. 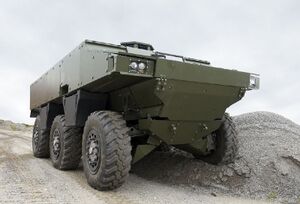 SEP-W6. The economic version of the SEP platform.

The SEP-W6 is a simplified and cheaper variant based on the SEP Plattform. BOFORS Hägglunds AS refer this 6x6 APC as armored patrol vehicle. It lacks some features of other SEP vehicles and mounts a less powerful power system but it retains modularity of the SEP Plattform. The SEP-W6 can be fitted with interchangeable mission modules. This feature provides multirole flexibility and due to its modularity the SEP-W6 can be configured for various missions simply by swapping a mission module. Variants include command vehicle, armored ambulance, reconnaissance vehicle, recovery vehicle, mortar carrier and possibly some other.

In APC form has a crew of 2 or 3 men. It accommodates up to 8 fully-equipped troops. Passengers enter and leave the vehicle via rear doors.SEP-W6 can be airlifted by some tactical transport aircraft.

Although the SEP-W6 can be perfectly used in combat operations, its main role is that of surveillance and patrol making it an ideal vehicle also for police forces, paramilitaries and private defense contractors.

The SEP-W8 (8x8 APC) is one of the most advanced vehicles in its class and integrates all the technological innovations of the SEP Platform. It has been designed to offer outstanding performance in all types of terrain and roles, thanks to the technological innovations (hybrid powertrain, hydropneumatic suspension, stealth technology, advanced electronics,...) it incorporates and the flexibility of the SEP Platform.

SEP-W8 8x8 vehicle is designed for 40 modifications. All SEP-W8 versions are 6.1 m long and 2.8 m wide. It can be fitted with interchangeable specialized mission modules. This feature provides multirole flexibility and makes vehicle upgradeable and reduces life-cycle costs. SEP-W8's versatility enables it to replace a wide range of armored vehicles.

SEP-W8 has a hybrid diesel-electric drive. It is fitted with two Scania XSI-8 V6 Multifuel, two NAtech FREYJA™ Fuel Cell and two Batteries. SEP-W8 can be used in full electric mode and in this case the vehicle run in silent mode. SEP-W8 is airportable by the different transport aircraft as A-400, however add-on armor protection has to be removed to be transported in C-295 and C-130 Hercules.

SEP-T is the tracked version of the SEP Platform. It shares all the technological innovations and modularity of the SEP-W8, and also incorporates a completely new track system.

SEP-T is fitted with special rubber bandtracks (already used with Bv206 articulated carriers) rather than conventional steel link tracks. These tracks are lighter, quieter and have a operational life of about twice that of an equivalent steel linked track. The new bandtracks have a lower rolling resistance and are operating more efficiently with the electric transmission systems, yielding higher fuel efficiency. Another unique design feature is the underframe mounted suspension. This spaced outer layer gives improved protection against mines. The SEP vehicle can withstand a 7 kilogram TNT explosion under a track.

The use of bandtracks and decoupling the suspension from the side frames and hull dramatically reduces internal noise level to as low as 85dB, which is sufficiently low to meet civilian vehicle noise requirements.

Retrieved from "https://wiki.conworlds.org/w/index.php?title=SEP&oldid=33915"
Categories:
Hidden category:
Cookies help us deliver our services. By using our services, you agree to our use of cookies.