Saab 39 Gripen was the first of the new generation, multi-role fighter aircraft to enter operational service. Using the latest technology it is capable of performing an extensive range of air-to-air, air-to-surface and reconnaissance missions employing the latest weapons. Gripen is designed to meet the demands of existing and future threats, while simultaneously meeting strict requirements for flight safety, reliability, training efficiency and low operating costs. Today it is the backbone of the Luftforsvaret

Gripen is a truly international weapon system incorporating the latest technology from a team of major defence industries. As the newest generation of fighter in service today, it has been designed to maintain operational superiority against existing and future threats by providing spare system capacity to easily allow the incorporation of new sensors, avionics and weapons.

A truly Network Centric new generation multi-role fighter with the world’s most highly developed secure and multi-frequency data link, providing total situational awareness for the pilot in all roles. 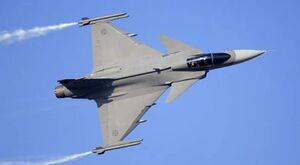 Gripen achieves the lowest operating cost of any fighter currently in operational service. This is accomplished by combining advanced system design, high technology and modern components.

The Gripen is built to be adaptable to changing threats and operational requirements faced by a modern air force. Gripen has significant growth available and many features are implemented in software. This means that modifications are much easier to design and implement. In most cases costly hardware changes can be avoided.

A two-seat version of the Gripen, which retains the full operational capability of the single-seater, is also available for tactical weapons training, more specialised missions and type conversion. 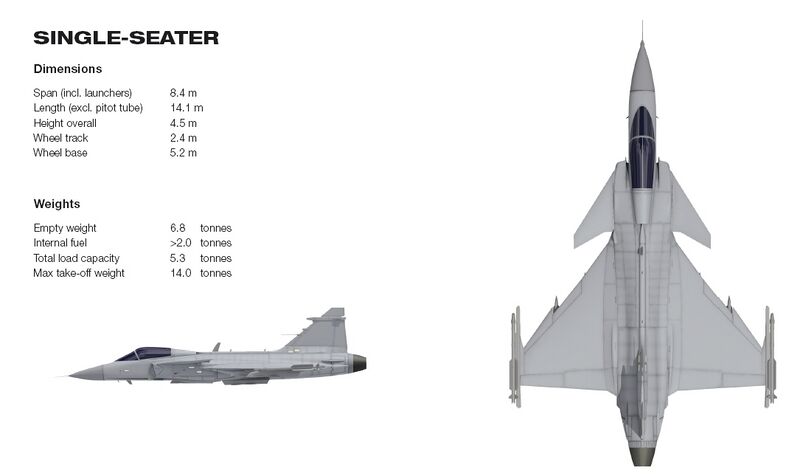 Designed to ensure outstanding combat agility. Gripen features a delta-canard configuration with relaxed aerodynamic stability. The delta wing and canards, along with the digital Fly-By-Wire Flight Control System, give the fighter an optimum combination of manoeuvrability, acceleration, top speed and short-field performance.

Gripen V-G is the "fifth generation" Gripen with increased fuel capacity, a more powerful powerplant, increased payload capacity, upgraded avionics and other improvements. The new Gripen V-G version has many new parts and is powered by a new Volvo Aero engine. The engine produces 25% more thrust at 106 kN, enabling a supercruise speed of Mach 1.4 with air-to-air missiles.

The Gripen V-G maximum takeoff weight has increased from 14,000 to 16,500 kg with an increase in empty weight of 200 kg. Due to relocated main landing gear, the internal fuel capacity has increased by 40%, with a significant increase in range. Combat radius will be 1380 km with six AAMs + drop tanks, and 30 min on station. Ferry range will be 4,070 km with drop tanks. The new undercarriage configuration also allows for the addition of two heavy stores pylons to the fuselage. A new Saab Electronic Defence Systems radar and a new antenna has been added.

Luftforsvaret has begun to upgrade all its Gripen to Gripen V-G in 2018. The upgrade programme should be finished in 2024 and would guarantee the operative life of the aircrafts at least until 2035.

Gripen M is the "navalized" version of Gripen E capable of operate from aircraft carrier decks. For carrier operations, the M model has a strengthened airframe, the airframe and undercarriage are reinforced to withstand the stress experienced upon landing, an arrestor hook, catapult attachments, longer nose gear leg to provide a more nose-up attitude and a built-in boarding ladder. Consequently, the Gripen M weighs about 310 kg more than the Gripen E. The Gripen M, unlike the Gripen E, can both conduct aerial refueling and "buddy" refuel other aircraft.

Retrieved from "https://wiki.conworlds.org/w/index.php?title=Saab_39_Gripen&oldid=38611"
Categories:
Cookies help us deliver our services. By using our services, you agree to our use of cookies.