Her Royal Majesty's Royal Army (commonly shortened to the Sierran Royal Army or simply the Royal Army and also abbreviated as SRA) is the land warfare service branch of the Sierran Crown Armed Forces. It is one of the six uniformed services of the Kingdom of Sierra. It is the oldest and most senior branch of the K.S. military and is nicknamed as the Old Guard. It traces its origins to the Bear Flaggers of 1846 when a band of Anglo-American citizens and Californios living under Mexican California rebelled and joined the Mexican-American War. The Bear Flaggers became formally organized as the Californian Army, which was subsequently reorganized as the modern Sierran Royal Army in 1858.

The Royal Army experienced its first major activity during the War of Contingency when Sierra entered the intercontinental conflict with Brazoria against the forces of the United Commonwealth. Sierra's military successes earned the Royal Army prestige and fame despite its contemporaneous infancy and small size. It defended the Kingdom during the Sierran Civil War when it fought against the self-declared Second California Republic in the Styxie and Central Sierra. It later engaged in the military occupations and annexations of various Pacific nations and islands during the Age of Imperialism including Hawaii and Tondo. It participated in the Mexican Revolution and the subsequent Mesoamerican War, while adopting the role as the Kingdom's gendarmerie during the controversial Approbatio period of the Sierran Cultural Revolution. During Great War I, the Sierran Royal Army successfully defended the Sierran homeland by repelling a failed invasion of Sierra by the United Commonwealth, and contributed to the liberations of Superior and Brazoria. In Great War II, the Sierran Royal Army played a critical role in both the European and Pacific theaters, cementing its status as one of the world's most powerful armies at the end of the war. During the Cold War, the Sierran Royal Army experienced an arms and technological race with the Germany, the United Commonwealth, and the United Kingdom. It participated in several Cold War proxy wars including the Colombia War and the Vietnam War. Since the Cold War, the Royal Army has maintained an active global presence and has witnessed significant military engagements primarily in the Middle East and North Africa.

The Royal Army is under the administration and supervision of the K.S. Department of the Army, which reports to the K.S. Minister of Defense. The professional head and most senior officer of the army is the Chief of Staff. The current Chief of Staff is Mike Bennett who is also the current chairman of the Joint Chiefs of the Defense Staff. The civilian head of the Royal Army is the Secretary of the Army who is currently Robert Perry.

The Sierran Royal Army is the land-warfare branch of the Sierran Crown Armed Forces. Its purpose is to provide the national defense and security of the Kingdom of Sierra, its territories, its crown dependencies, and any areas under the occupation or protection of Sierra. It is responsible for preventing and deterring attacks on K.S. soil as well as its citizens, nationals, and interests. In times of peace, it aims to preserve stability and maintain peacetime readiness. In times of war, its objective is to coordinate its action with the other branches of the Armed Forces in overcoming and defeating Sierra's enemies and military threats swiftly and competently.

As the Californian Army[edit | edit source] 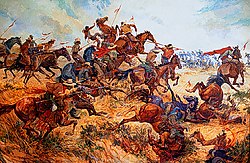 Californian forces fighting the Mexicans during the Battle of San Pasqual

Prior to the establishment of the Kingdom of Sierra, the California Republic had existed for a decade following its independence as a result of the Mexican–American War. During the war, various Californian militias were formed and unified into a combined militia and were supported by the United States in their fight against Mexico. Following the war's end, the militias were organized into the Californian Army and were now a standing army. The United States sent supplies to the California Republic, including weapons, to aid the Californian Army and help aid in their organization into a sufficient fighting force. The Californian Army would see combat during its brief ten year existence, but was infamous for its lack of a proper chain of command, mediocre and mixed quality officer corps, low morale and inability to protect the territories of the California Republic, especially in the Eastern Frontier where the army was only present in cities and large towns with settlements and villages having to rely on mercenaries and militias for protection and vigilantism was rampant in the nation.

During the 1857 Californian Constitutional Convention, the assembled delegates recognized the need for a stronger, more cohesive army. The Californian military had been plagued with ineffective leadership and inconsistent organization. The Californian Congress had little actual power over raising an army and had relied heavily on the services of civilian-run militias. The delegates wanted to prevent factionalism within the national army and be able to raise a standing army that could be quickly assembled, organized, and deployed in times of defense. The need for a national army was recognized and enshrined in the Constitution of Sierra, which gave Parliament the power to establish, raise, and regulate an army, while the King was to be the army's commander-in-chief through royal prerogative (but executed by the prime minister).

The Sierran Royal Army was officially founded on November 27, 1858, coinciding the birth of the nation and various other institutions including the army's sister branches, the Royal Navy and the Royal Marines. The Royal Army initially had four regiments, each which were further divided into 15 battalions. Within half a year of the Sierran Royal Army's inauguration, its officer corps were filled by competent military leaders who received instruction and training from Canada and the United States. In turn, the enlisted received rigorous training and were given adequate housing and pay. The Sierran government encouraged citizens and non-citizens to enlist, hoping to raise a large military to repel the possibility of a much-feared invasion by the United States or another war with Mexico.

When the Sierran Civil War began in 1874, the Sierran Royal Army was heavily divided, especially among units from the Styxie and other provinces that joined the Second California Republic, the self-proclaimed state headed by republican leader Isaiah Landon. After the war broke out, almost all army divisions and units from the Styxie provinces defected to the Republicans along with many other units as well. These units formed the California Republican Army and were supported by the Bear Flag Movement, United Farmers' Front, and various international volunteers who flocked to support the republicans during the war. Units that were from provinces still loyal to the Monarchy remained part of the official army which was organized as the Royalist Army or Monarchist Army during the war. Most loyalist troops were from the Southern and Eastern Provinces while those from the north and northwest aligned with the Republicans or were heavily divided and split based off of regional loyalties and ideological differences as well.

The Royal Army saw heavy combat throughout the war as the navy was also divided, but much of it remained loyal to the Crown. The backbone of the Monarchist forces were various divisions and units of the Royal Army from provinces such as the Gold Coast, Kings, Orange, Laguna, the Inland Empire, Imperial, Flagstaff, Clark and Mohave among many others. During the war, many soldiers of the army were also Loyalist republicans, Sierrans that were members and supporters of the republican movement, but were opposed to Landon and his communist-inspired republic. The Monarchist and Republican armies fought across the country from the frontier in the Northeast to the Southern provinces, most notably during the 1876 Great Southern Offensive by the Republican armies and later during the push into the Styxie towards the end of the war. After the Monarchists won in 1877, the Royal Army was reunited and reorganized in the years after the Civil War had ended.

During the late 1910s, revolutionary wars broke out in both the United Commonwealth and Mexico. Under the leadership of Robert Landon, the Sierran Royal Army would stay out of both wars for most of the conflict, but the Army organized and reformed between 1906 and 1916. By 1920, the Sierran Royal Army had become heavily involved in the Mexican Revolution where it supported various factions in the conflict from revolutionaries to the provisional government under the leadership of President Umberto Fernandino, though support was dropped in 1916 after Fernandino had expelled Sierran Army advisors in response to the role of Sierran mercenaries and volunteers played in revolutionary factions. When Sierra and the rest of Anglo-America joined the war in April 1917, the Sierran Royal Army was mobilized and was part of the American Expeditionary Forces and troops were sent to fight on the side of South Mexico and the Yucatán Republic. Sierran troops fought alongside anti-Landonist revolutionaries and performed valiantly alongside other Anglo-American troops which helped increase the prestige of Sierra and other Anglo-American countries and saw the nation rise to a major power on the world stage. After the war had ended, the Sierran Army emerged as a proficient and well-organized fighting force.

After the war had ended, the Sierran Army emerged as a proficient and well-organized fighting force. Sierran troops would later participate in the Allied intervention in the Russian Civil War in support of the White movement. The Sierran government led by Prime Minister Philip Jude was greatly concerned over the possibility of Landonism spreading if the Bolsheviks in Russia were not defeated and feared that Landonism would spread into Sierra and the rest of Anglo-America. The intervention ended up being a success and the Whites emerged victorious in the Russian Civil War. During the Sierran Cultural Revolution, the Royal Army had partial involvement, mostly through army intelligence for counter-terrorism operations, though specific divisions were deployed during the Little Civil War of the 1920s and 30s due to the violence in the Styxie which, while not high enough to cause a second civil war, was enough to cause concern to the federal government and warrant deploying security forces to the Styxie. While officially neutral, the army units that fought in the Little Civil War supported pro-revolutionary forces.

The Sierran Royal Army is one of the six armed force branches of the Sierran Crown Armed Forces. It is under the civilian authority of the Department of the Army which is headed by the Secretary of the Army. The Department is itself an agency under the jurisdiction and scope of the Ministry of Defense. The most senior army officer is the Chief of Staff, who is also a member of the Joint Chiefs of the Defense Staff. The current chief of staff, General Mike Bennett is also the current chairman of the Joint Chiefs. The Joint Chiefs of the Defense Staff and the National Security Council are the top two military deliberative bodies in the Sierran Crown Armed Forces. Operational chain of command bypasses the Secretary of the Army and the Chief of Staff as the Minister of Defense issues military commands directly to the unified combat combatant commanders.

The administrative headquarters of the Sierran Royal Army is at the Pendleton Military Center in Escondido County, Laguna, which it shares with the other branches of the Sierran Crown Armed Forces. It maintains and operates 63 distinct bases, army depots, weapons centers, training facilities, and other military-related properties nationwide and 29 similar facilities overseas. It leases 11 of these to the Conference of American States where it garrisons the troops of other participating CAS member state armed forces under the aegis of CAS.

Retrieved from "https://wiki.conworlds.org/w/index.php?title=Sierran_Royal_Army&oldid=115858"
Categories:
Hidden categories:
Cookies help us deliver our services. By using our services, you agree to our use of cookies.