The Sierran dollar (Sign: $, code: KSD) is the official currency of the Kingdom of Sierra and is divided into 100 subunits known as cents. Circulated and managed by the Royal Monetary Authority, Sierra's central banking system, the current currency has been in use continuously since 1863, replacing the California dollar, a remnant of Sierra's predecessor state, the California Republic. It is the world's fourth-largest reserve currency and is used unofficially by three other sovereign states: Colombia, Pakistan, and Zimbabwe. It is the de facto currency in the case for Zimbabwe which began using the Sierran dollar in 2003.

The Constitution of Sierra proscribes the power to coin and mint money to the Parliament. Since the Mint Acts of 1859 and similar laws enacted since, the specifications and standards of Sierran currency determine that the Sierran dollar be issued. The term "dollar" derives directly from the United States Constitution by which the Sierran constitution is adapted from. There in that document, the term is a reference to the Spanish milled dollar used by Spain at the time.

The Sierran dollar is based upon a decimal system wherein the lowest unit of the dollar is the penny which is one-hundredths of a dollar (represented as 1¢). Banknotes and coins issued by the Royal Monetary Authority of Sierra have been in use since 1863 after the establishment of a central banking system in Sierra. Denominations equal to or lesser than one dollar are circulated and released in the form of coins while denominations equal to or greater than one dollar are issued in banknotes. All KSD notes are printed using wood fibers while coins are minted using combinations of copper, zinc, nickle, and manganese. The former two, especially copper, makeup the majority of all the coins' composition. In the past, coins have been minted with gold or silver. The $1 coin whose appearance is gold is in fact not made out of gold, but rather the exterior cladding of manganese brass. 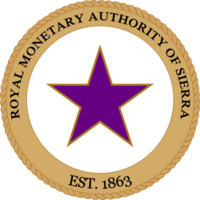 Logo of the Royal Monetary Authority of Sierra.

While Sierran dollar banknotes and a select choice of coins (namely the 1¢, 5¢, 10¢, and 25¢ in limited quantities) are the only legal tender in Sierra, commercial transactions may be settled legally between any disputing parties via mutual consent. The Royal Monetary Authority of Sierra is the primary government body which governs and regulates the monetary policy and circulation of the Sierran dollar. The Royal Mint of Sierra on the other hand, a distinct and separate government agency, holds the sole right to mint and produce coins for Sierra.

Every once or twice a year, usually before Christmas and the first day of summer, the Royal Monetary Authority distributes a large amount of its currency to commercial banks nationwide and then gives additional amounts to clients upon request.

Retrieved from "https://wiki.conworlds.org/w/index.php?title=Sierran_dollar&oldid=45654"
Categories:
Cookies help us deliver our services. By using our services, you agree to our use of cookies.