Skjold Class Stealth Missile Corvette is a class of 22 superfast, stealth missile corvettes in service with theSjøforsvaret. They are characterised by its speed, reduced signatures, small size with heavy weapon load and its littoral combat capability. The Skjold Class ships have an air-cushioned catamaran hull (surface effect) which, with waterjet propulsion, provides high speed and manoeuvrability.

An important capability of the Skjold Class vessels is their covert operational capability in littoral warfare, particularly in using Skandinavia’s coastal topography with its islands and fjords, to carry out surveillance and engage hostile forces from a close distance while remaining undetected. The shallow draught of 1m allows the ships to access very shallow waters denied to other vessels. 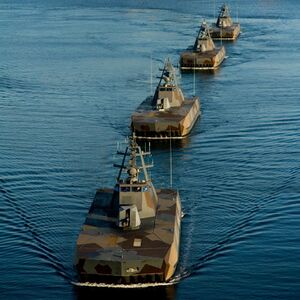 The ship’s configuration uses an air cushion catamaran (ACC) design, which is an advanced variant of surface effect ship (SES) technology. The ACC is based on a catamaran hull with an air cushion between the hulls, which has been successfully proven with the Rauma Class minehunters and minesweepers, which entered service in 1994. The low area of wetted surface of the hulls gives an improved level of shock resistance and significantly reduced wave resistance, compared to that of a conventional displaced or semi-displaced hull configuration. The vessel’s stabilisation systems, including a ride control system which monitors and regulates the pressure of the air cushion by controlling vent valves and a stern fan system that controls the stern seal pressure. The elevated position of the magnetic components reduces the magnetic signature.

The combination of the twin hull and water jet propulsion provides very high and very responsive manoeuvrability. Vital systems have been duplicated for enhanced survivability and the ship remains operational with one engine room set lost. The low draught of 1m on cushion gives an advantage of access to shallow coastal waters and lower vulnerability to impact against surface or tethered mines or other debris.

The hull is of composite construction. The hulls are laminated inside and outside with fibre-reinforced plastic composed of glass fibre and carbon laminates bound with vinyl ester and polyester resin. A scrimp manufacturing process is used in construction, involving vacuum-assisted resin injection. Carbon fibre and carbon-loaded materials have been selected for the beams, mast and supporting structures, which need high tensile strength, for example the support structures for the gun and the electro-optical and radar weapon director.

Radar-absorbent materials have been used in the load-bearing structures across large areas of the ship. This strategy leads to significant weight saving compared to conventional construction techniques of applying RAM cladding to the external surfaces. The ship’s profile has a faceted appearance with no right-angle structures and few orientations of reflective panels.

Doors and hatches are flush with the surfaces and the windows are flush without visible coaming (edge of window aperture) and are fitted with radar-reflective screens.

The TERMA C-Flex Combat Management System uses operating modes for littoral warfare, is interoperable with other Sjøforsvaret's vessels and gives fast response to pop-up air threats, such as helicopters or other aircraft that suddenly emerge from cover.

The propulsion system is fully electrical with two NAtech Marine hydrojets mounted externally to the main hull. The electricity for the motors is supplied by the power system. 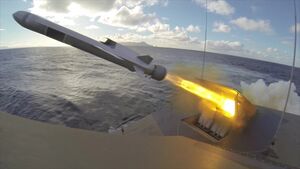 Retrieved from "https://wiki.conworlds.org/w/index.php?title=Skjold_Class&oldid=34417"
Categories:
Cookies help us deliver our services. By using our services, you agree to our use of cookies.