Not to be confused as Mariana.

South Mariana, officially the Independent Pacific State of South Mariana is an archipelagic country in Pacific Ocean. It is located southernmost of Mariana Archipelago but the country doesn't include the island of Guam. It consists of 19 islands that are categorized broadly under the three main geographical divisions named: Durem, Lanu and Sapet. The capital city is Maisa and most populous city is Sangan.

It was a territory of Spanish East Indies in 1565 until 1898. After Spanish-American War, Guam were sold to the United States but the northern part of archipelago were sold to Germany. It was also attempt that southern part of archipelago were also sold to Germany but some people didn't agree because they want independence. During World War II, it became a Japanese territory following the loss of South Mariana in Battle of Maisa. After the surrender of Japanese soldiers, the country was restored in 1945. The current constitution was enacted in 1998 by former president Flerida de Leon to established the federal government of the country.

The first election was held in May 26, 1902 and Carlos Inemu won the election against Alberto Pomar and Lucio Dalum. During Inemu administration, the Second Kampalin War happened because the U. S. forced them to colonize the country but they did not agree. The war was happened in two months and many casualties in both parties. Due to the efforts of Maisanese people, the government of South Mariana won against the United States.

After the Second World War, Marcos Taitano (the son of former president Felipe Taitano) became president and he won the election against Alonzo Borja, Macario Sapyang, and Gabriel Concepcion. During his term, Talina became the temporary capital of the country due to the severe damage of Maisa during war. He rebuilt the city of Maisa for two years with the help of the people.

In 1998, the current government of South Mariana was shift from unitary to federalism by former president Flerida de Leon.

South Mariana is a federal semi-presidential constitutional democracy which serves as the foundation of the executive, legislative, and judicial branches. The president is the head of state and he/she appoints the prime minister and the deputy prime minister. The vice president will be take over the post if the president is resigned or removed. The government of the country is bicameral and it is divided into two houses: House of Councilors (upper house) and House of Delegates (lower house).

Progressive Party (Partido Progresista) was founded in 1902. It is one of the largest political party in South Mariana. It is also the oldest political party in the country.  The party advocates progressivism and agrarianism. This party is very popular among the masses for almost centuries and many former presidents in the history of South Mariana are from the said party. The current chairperson of the party is Robert Pulina while the secretary-general is Manolo Sagayon.

Democratic Party (Partido Demokrata) was founded in 1928, following the dissolution of Independence Party (Partido Kampalin). The party advocates popular democracy and social liberalism. It is considered as the oldest minor political party in South Mariana. The current chairperson of the party is Marco Neumann while the secretary-general is Cassandra Yamasaki.

United Citizens Party (Partido Unida Matauhan) was founded in 1948, two years after former president Alonzo Borja defeated for the re-election of 1946 presidential election. The party advocates nationalism, populism and social democracy. The current chairperson is Lucio Borja while the secretary-general is Petra Concepcion. 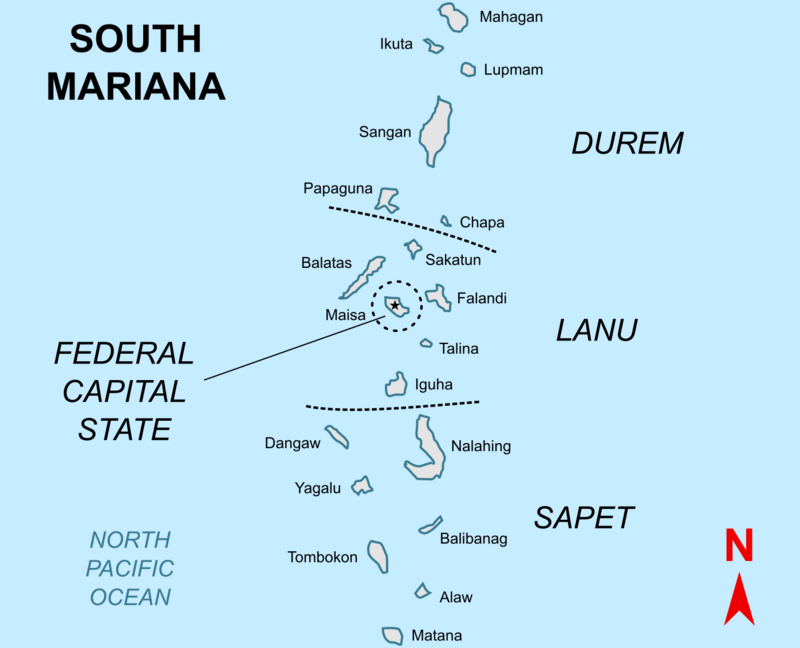 Buses, carozas, taxis, and motorcycle are commonly available in major cities and towns. Carozas are popular and iconic horse-drawn carriage that still exist today. They have become a symbol of the Maisanese culture and it is considered as a counterpart of kalesa in the Philippines. Medium boats are also used for transportation from island to island.

The mobile telephone market of South Mariana is divided between two companies - Azul Mobile and Fresco Telecom. The two telecommunication companies have also subscribers in Guam and Northern Mariana Islands. Over 48% of the population were used mobile phones in everyday life. The state of mobile market is stable due to the stronger signal by using 4G network.

As of 2010, there are around 532,901 Internet users in South Mariana with overall Internet penetration of 49%. In 2014, former president Miguel Schneider signed a law for the free access of Wi-Fi for the whole country especially in public areas.

The education of South Mariana is free and compulsory for the ages 5 to 22. The education of the country is divided into four groups: kindergarten (5-6 years old), elementary (7-12 years old), secondary (13-18 years old), and tertiary (19-22 years old). Some students are not going to college but instead they take some vocational courses to improve their skills and to help a better working experiences.

The Original Pilipino Music (OPM) is very popular of South Mariana due to the bigger population of the Filipino community in the country. Aside from OPM, some people in the country are listening to J-Pop and K-Pop.

Most of the time, the Maisanese TV audiences are enjoying of watching TV series from China, Japan, Latin America, South Korea, Philippines, Thailand, and United States. Local dramas are also available but it is uncommon to produce TV series in the country. Some of the highest rated Maisanese drama in history are Pahat Bulan (Blue Moon), Balai ni Mungen (House of Darkness), Han Palahad (The Promise), and Maria Corazon.

The cuisine of South Mariana are influenced by the Spaniards, Filipinos, Chamorros, and other ethnic groups. The most famous dish is adobar. The main ingredients of the said dish are soy sauce, vinegar, black peppercorns, bay leaves, and chilis. It has the same taste of the Philippine adobo but it has a spicy taste.

Retrieved from "https://wiki.conworlds.org/w/index.php?title=South_Mariana&oldid=45408"
Categories:
Hidden category:
Cookies help us deliver our services. By using our services, you agree to our use of cookies.