StanFlex (also known as STANFLEX or Standard Flex) is a modular mission payload system used by the Sjøforsvaret, (SJF). Originally conceived during the 1990s as a way of replacing several classes of minor war vessel with a single class of multi-role ships, the StanFlex system consists of weapons and equipment mounted in standardised containers, which can be loaded into slots on the ships. These containers can be swapped out in a short period of time, allowing the ship to switch between roles when needed.

The success of the modular payload system led the Sjøforsvaret from 2012 to design new warships with StanFlex slots, and to install if possible slots on older vessels during major refits.

Exchange modules can be transported either over land by trucks, be ferried by sea or be airlifted by capable helicopters. The benefits of the Standard Flex concept are gradually being recognised by other navies worldwide.

The concept is a combination of standard platforms and different exchangeable weapon and system modules to match different missions or roles. Sensors and systems common to all roles are permanently fitted. As a truly “plug and play” concept it offers unique operational flexibility and exceptional lifelong logistic and financial advantages.

The StanFlex modular mission payload system consists on a wide range of weapons systems and other equipment mounted in standardised containers that can be quickly installed in pre-designated StanFlex slots in apropiately equiped warships, with the containers shipped being determined by the mission required. StanFLex modules were first installed in Standard Flex 300 vessel (later named the Flyvefisken Class). These were 54-metre long, 320-ton patrol vessels, fitted with one StandFlex slot forward and three aft.

In 2005, FLOSK began to work on the specifications of the future ships that would equip the Sjøforsvaret and the StanFlex system was redefined and adapted to modern needs. Since 2012, all new ship designs for the Sjøforsvaret have to be compatible with the StanFlex system and, as far as possible, an attempt will be made to adapt the existing previous ships in case of any major retrofitting. 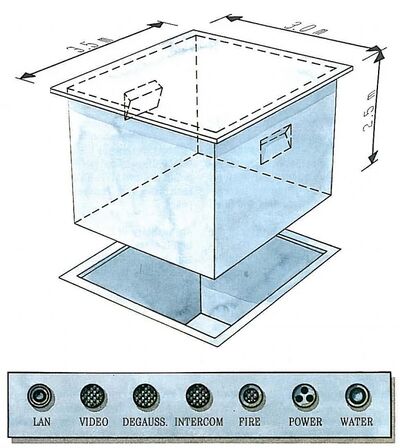 The containers are adapted for the various types af weapons and equipment they hold and/or carry on top. The standardisation applies to the outer dimensions, the deck litting and the interfaces. The outer dimensions are 3.0 m in length, 3.5 m in width, and 2.5 m in height. The interface comprise precision-machined flanges which ensure that the module accurately mates up with connections for power, ventilation, communications, water, and data.

Depending upon purpose, the various containers are configured either as a closed box with a watertight door and hatches providing access to the interior, such as a storage container, or they have open sides and only the corner constructions to connect top and bottom. The weapon or equipment itself is mounted on the container top and all dedicated electronics or machinery (includingany some local controls) belonging to the system are installed inside the containers and connected to the standard interface panels. Precision-machined flanges ensure that the module accurately mates up with connections for power, ventilation, communications, water, and data.

Modules are usually installed and replaced by a 15-ton capacity mobile crane. A module can be swapped out and replaced within half an hour, and after system testing completed, the ship is ready to deploy within a few hours. Tey are normally exchanged in the naval base once the mission parameters have been defined, but it is also possible to exchange the modules once at sea if the parameters of the mission change without the possibility of going to port. The modules can be easily transported on trucks, trains, ships, airplanes and can even be airlifted by helicopter directly to the ship that needs them.

Retrieved from "https://wiki.conworlds.org/w/index.php?title=StanFlex&oldid=34410"
Categories:
Cookies help us deliver our services. By using our services, you agree to our use of cookies.