Sweetwater is an area of the Deseret located in the northeast corner of the constituent nation within the wider Kingdom of Sierra. It is disputed between Mormon and Canaanite populations, to the west and east of the capital respectively. The capital of Sweetwater is Green River, which is also one of the two commonly accepted alternate names for the province due to the fact that the Sweetwater River located in Superior falls just short of territorial boundaries. Sweetwater is divided into two counties; Uinta to the west and Natrona to the east, respectively.

The name Sweetwater derives from the Sweetwater River, located just north of the territory under its original boundaries given by the Territory of Wyoming after its breakaway from the territory's first incorporated county, Laramie.

Under American control now, people began to move west to find better opportunities for business and way of life. Some decided to remain on the trails west and set up towns, which would be useful for railroads that would later be incorporated across the nation. The county seat of Uinta County, Evanston, would soon be one of these towns, religiously kept under Mormon influence.

Work would continue on these railroads as well as mining operations even during both the Civil War and the War of Contingency, but some of it would come to an abrupt halt during the Canaanite-Mormon War that came alongside the latter.

After the bloody war between Canaanites and Mormons had finally come to an end, Sweetwater became a territory with two counties which were named Uinta and Natrona (named after the Uintah people of Wasatch province located just below Sweetwater and the large supply of trona found just northeast of Green River respectively). Each county was founded within two and three days respectively after it was entered as a territory in the 1870's.

On November 16th, 1931, Sweetwater's capital of Green River became the first city in the Kingdom of Sierra to ban door-to-door solicitation under Ordinance No. 175. This was a controversial move that only lasted a few months into the following year before Section 4a was added, which stated that religious ordinances in conflict of this one are allowed to bypass this ruling due to the split Mormon population residing within city limits.

Geographically, this territory is located between the 41st and 42nd parallels north above the equator. Its western border is with the Deseretan province of Wasatch, and its eastern border is mainly among the North Platte River.

The Green River Basin is a prominent feature that defines the layout for most of the cities within Sweetwater. 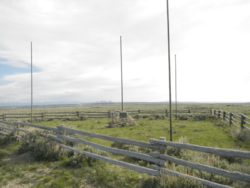 The Former Tri-Territorial and Friendship Marker just northeast of Steamboat Mountain is a historical marker set up by the governments of both Rainier and the Kingdom of Sierra to commemorate kind relations between the two states. (Alternatively, if you prefer the Astoria and Superior setup, it is a tri-national border checkpoint and historical grounds for remembrance between three former nations in history and three new nations today. This embrace does not come without disputes, however; notably the Sweetwater River dispute.)

According to the Sierra Royal Bureau of Census in 2010, people in Sweetwater were typically of English, German and Irish descent. About 92% of the population identified as White, and 0.4% as Asian. (WIP)

Historically, mining operations and railroads were the backbone of trade within the former Wyoming Territory. Part of it is still present today.

Other means of economic gain for the territory include tourist attractions, such as the Canaanite Museum in Saratoga, or the Greater Green River Intergalactic Spaceport just south of the capital.

Culture, much like key demographic elements of understanding, is also split between the Mormons of Deseret and the Canaanites of West Colorado. Gambling is very popular in Natrona County, but in Uinta County it is very restricted. There is an exception for the territorial capital of Green River that permits it.

Symbolism in Sweetwater can make it easily identifiable compared to other territories of the Kingdom of Sierra, as it is prominently known for its railroads and religious aspects today.

The Canaanite Moon and Sun symbol is commonly used to represent the religious groups that live in Natrona County.

The cowboy on horseback is also a prominent symbol in Sweetwater to represent the country lifestyle the area accommodates.

Retrieved from "https://wiki.conworlds.org/w/index.php?title=Sweetwater&oldid=70427"
Categories:
Hidden category:
Cookies help us deliver our services. By using our services, you agree to our use of cookies.