TERMA today is the result of the merger with the former NAtech Aerospace Division in 2009. The company has evolved into a global supplier of high-tech products and technology to the defense and aerospace industries in Skandinavia and worldwide.

TERMA headquarters are located in Lystrup near Århus and other Terma facilities are located at Grenaa and Herlev. Terma international locations and operations include Leiden and Woensdrecht in the Netherlands; Darmstadt near Frankfurt, Germany; Harwell, UK; Singapore, Abu Dhabi, United Arab Emirates and New Delhi, India. In 2004 the company opened an office in Warner Robins, Georgia. Today, the company's american activities also include the Terma North America Inc. headquarters in Arlington, Virginia and offices in Fort Worth, Texas and Norfolk, Virginia.

TERMA is a supplier of complex and critical aerostructures for commercial and military aircraft, such as pylons, pods, winglets, tails, roof constructions and engine components. Typically, TERMA designs, manufactures, and delivers the advanced structures to aircraft manufacturers and end users. Through its combined competencies within concept design, development, production, and certification TERMA is capable of offering solutions all the way from concept design to the final delivery of the end item.

TERMA is a strategic supplier to the F-35 Lightning II, delivering a series of parts, components, and technologies to the fighter aircraft. The company delivers leading edges through Lockheed Martin, composite tail parts through BAE Systems, gun pods for the F-35B and C versions through General Dynamics, as well as fuselage parts and electronics through Northrop Grumman Corporation. All in all Terma delivers more than 70 mission-critical parts for the F-35 Lightning II. 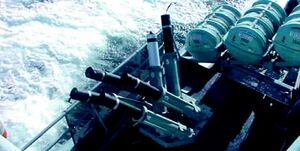 The TERMA Naval Decoy System is a cost efficient, reliable and efficient system, providing a ship with 360 degrees self-protection against threats from missiles and torpedoes. Terma's system may employ any form of standard decoy and can be installed on all types of ships, as it is extremely light and robust. Naval Decoy systems are also termed Soft Kill Weapon Systems (SKWS), because they redirect the attacking weapons as opposed to destroying.

TERMA is a global provider of advanced aerospace technology for fighters, transport aircraft, and helicopters. TERMA has strong partnerships with air forces and leading aircraft manufacturers and electronics houses in many countries.

Based on a set of unique processing techniques applicable across various domains, TERMA’s SCANTER Radar Systems provide reliable, customized and effective radar solutions to meet the customers’ demanding requirements all over the world. TERMA has a long history providing radar systems for surveillance applications. This includes antennas and transceivers.

TERMA is a market leader in: 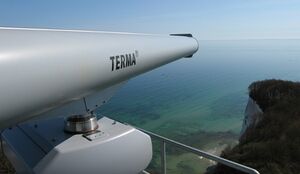 As a radar supplier, TERMA provides complete sensor system solutions. In the early phases, TERMA performs a site survey and provides advice on how to most efficiently build an overall system to provide a performance and cost efficient solution, while meeting the surveillance requirements in the appropriate application domains.

C-Flex Combat Management System is well suited for all types of platforms ranging from small patrol vessels up to large vessels. TERMA can integrate any subsystem from other manufacturers. The system provides the ship and the command team with outstanding operational capabilities in support of all mission types, both in the open ocean as well as in littoral regions. Excellence in situational awareness and rapid precision tactical response in all warfare domains are highly appreciated features of the C-Flex Series. Asymmetric threats, as well as modern and estimated future threat types can be met effectively. The C-Series include:

C-Flex is a truly scalable state-of-the-art naval Command & Control system. The system is proven configurable from a single user system on a mobile platform to a full blown 25 operator frigate OPS room. C-Flex provides the operator with full Situational Awareness and platform control based on sensors, effectors and data links. C-Flex covers the entire modern navy fleet requirement from single user systems as e.g. small patrol vessels and maritime helicopters to multiple user systems of frigates and destroyers, and every configuration in between, ensuring interoperability both nationally and internationally. C-Flex is based on a modern open architecture on top of COTS software and hardware, greatly lowering maintance and training costs.

C-Link provides Tactical Data Link by use of the ships own radio (HF, VHF, UHF or optionally SATCOM) and expands the user’s operating picture to offer greater interoperability in international operations. Through the link system, the operator can share and receive local pictures with other units using own sensors.

C-Link offers Link-11, Link-16, link-22 or a proprietary Terma Data Link system in accordance with customer requirements. Solutions are scaled to fit any maritime or airborne platform at a competitive price.

C-Guard is Terma’s field proven Soft Kill Weapon System (SKWS) for naval vessels protecting against Anti Ship Missile and torpedo threats. SKWS has been deployed at nearly 100 installations worldwide. The success has been ensured by a combination of fixed launchers and reliable hardware controlled by high tech software allowing customer programmed algorithms. Installation and maintenance costs are low adding to an overall affordable and competitive Life Cycle Cost. C-Guard can be scaled in different configurations depending on the ship design, type and size.

Future 130 mm decoys have options for variable range and velocity giving increased coverage and protection compared to other existing systems.

C-Fire AW (All Weather) is a combined electro-optical and radar fire control system that provides extended range engagement of air, surface and NGS targets in all weather conditions. The radar is of the Continuous Wave Doppler type and offers all weather detection and tracking against both air and surface targets.

The C-Search product family is a range of sensors characterized by superior performance to detect small targets in all weather conditions. The sensors are using a series of very advanced processing techniques and embedded trackers, which enables high resolution detection of small targets from the radar horizon to the ship’s side.

The Naval Surveillance Radars are used by navies and coast guards around the world for protection against asymmetric threats, Search & Rescue operations and policing tasks e.g. control of illegal immigration, smugglers, and piracy, and as such is a major contributor to the Situational Awareness picture for all ships from patrol vessels to frigates.

C-Raid is enabling greater interoperability between large and small units involved in a joint operation. This is achieved by connecting these units together via radio-based communication links exchanging track data and messages. Compared to traditional voice communication, C-Raid widely expands the operational potential and mission effectiveness by integrating even the smallest networked units in the situational overview.

TERMA supplies private and public customers all over the world and have worked in close cooperation with the most important european space agencies. The company operates in all phases of a mission life circle and deliver a broad range of systems and products and has an excellent track record for turning state-of-the-art technology into robust operational systems. TERMA solutions are used for environment and climate monitoring and for scientific missions promoting Earth observation and exploration of deep space. They also address navigation and telecommunication as well as surveillance and reconnaissance applications.

Terma provides specific electronic systems and software for each space mission, often based on standardized solutions within:

TERMA has specialized in the design, manufacture and operation of "cubesat" and "small sized" satellites. Powered with NAtech Fuel Cells and with the most advanced technologies TERMA Satellites has become in a cost effective and hard to detect alternative for all kind of civil and military uses. In addition, the company participates as a partner in complex satellite projects.

Retrieved from "https://wiki.conworlds.org/w/index.php?title=TERMA&oldid=33115"
Categories:
Cookies help us deliver our services. By using our services, you agree to our use of cookies.