The Church of Jesus Christ of Latter-day Saints

The Church of Jesus Christ of Latter-day Saints (LDS Church) is a nontrinitarian, Christian restorationist that professes to be the restoration of the original church founded by Jesus Christ. It includes a number of beliefs and teachings which are distinct from mainstream Christianity. The church is the largest denomination in the Latter Day Saint movement founded by Joseph Smith. It was founded on Beaver Island, Superior by James J. Strang following the death of Joseph Smith. During the Latter Day Saint succession crisis, Strang and his followers competed against other contenders, namely Brigham Young and Sidney Rigdon. The LDS Church under Strang's leadership became the dominant Latter Day Saint church by the 1870s when it displaced the Brighamites from the Deseret, who continue to exist today separately as the schismatic Church of Jesus Christ of Latter-day Saints, distinguished with the parenthetical (Brighamite). Both churches maintain that they are the original church founded by Joseph Smith.

In 2017, the Church reported a membership of over 19.5 million adherents. Adherents of the Church are formally known as "Latter-day Saints", although the informal term "Mormons" have been used extensively to describe members of the Church by both members themselves and non-members alike. Similarly, the term "Mormonism" has frequently been used interchangeably with the Church. In 2018, the Church declared that the proper, official term for its members should only be Latter-day Saints, and discouraged both members and non-members from using the term. It extended this advisory against Mormonism and even the shorthand term, "LDS" to refer to the Church.

Although the LDS Church considers itself as part of the Christian tradition, it holds distinct beliefs and theology that differs from mainstream Christianity. Through the doctrine of continuing revelation, it holds that God the Father revealed new knowledge to the American prophet Joseph Smith through the angel Moroni, information of which were written down into the Book of Mormon and other documents known collectively as the standard works. Mormons believe the standard works are scriptural and are thus as equally important and valid as the Christian Bible. In addition to the standard works, Mormons base their doctrines and beliefs on the writings and sayings of Joseph Smith, James J. Strang, and other prophets believed to have received revelation from God. Central to the Church is the belief that salvation is made only possible through Jesus Christ. The Church holds that Jesus was a mortal human being who was adopted as the Son of God and crucified in order to atone for the sins of humanity. Mormons believe in the bodily resurrection, wherein Jesus overcame death and then ascended into heaven after he delivered the Great Commission. Other notable beliefs include baptism for the dead, observance of the seventh-day Sabbath, eternal marriage, degrees of glory, pre-mortal existence, plan of salvation, theosis, and promotion of vegetarianism. The Church asserts that it is the restored church that is identical to the early Christian Church.

The Church is currently headquartered in Salt Lake City, Deseret. In addition to functioning as a religious organization, the Church also plays an important political role in Deseret governance through the country's theodemocratic system as the state religion. The Constitution of the Deseret declares that "The Church of Jesus Christ of Latter-day Saints is the established church of the State of Deseret" and delineates the relationship between church and state. The President of the Church is also the President of Deseret and various other secular posts are filled by church officials by ex officio. Contrary to popular belief, the doctrine of separation of church and state practiced in Federal Sierra does not apply to Deseret as the latter is its own constituent country where the Constitution of Sierra that contains such doctrine has no jurisdiction over Deseret. The primarily relevant document that governs Deseret and its sister constituent countries is the Charter which has no wording pertaining to the roles and relationship between church and state. The Church's political supremacy over Deseret has been affirmed by the Supreme Court of Sierra since 1987, an issue which has continued to be highly contentious and controversial in Sierran politics. The Church's control over the country has been subject to international criticism and scrutiny due to concerns of human rights abuses, civil rights issues, discrimination, accusations of authoritarian rule, and repression of non-affiliated Latter Day Saint groups and the new age movement Canaanites.

The Church of Jesus Christ of Latter-day Saints traces its origins back to the life and teachings of Joseph Smith, whom they regard as a prophet and seer of God. Within the official church historiography, the Church's history can be divided into three periods: 1) the church during the lifetime of Joseph Smith, which is common among all Latter Day Saint movement churches; 2) a pioneer era under the leadership of James J. Strang and his 19th century and early 20th century successors; and 3) a modern era beginning in 1950 when Deseret achieved constituent nationhood, which gave the Church both spiritual and political authority over the country. 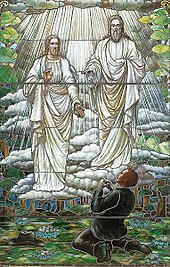 The Church was formally organized by Joseph Smith on April 6, 1830, in west New York, Congregationalist States (then the United States). Church adherents as well as those associated with the broader Latter Day Saint movement believe that Joseph Smith received revelation from God and was called to become a modern-day prophet. Among the beliefs surrounding the prophethood of Joseph Smith, the central doctrines contend that there was a First Vision wherein God the Father and Jesus Christ appeared before Smith near his New York residence; that Smith received an angel named Moroni who directed him to find the golden plates, metal plates written by two ancient prophets (Mormon and his son Moroni) in Reformed Egyptian; and that Smith translated the golden plates into the Book of Mormon through the use of divine seer stones (namely Urim and Thummim).

Smith founded the Church of Christ, which became the first religious entity affiliated with the Latter Day Saint movement on April 6, 1830. He gained a large congregation of followers and by late 1830, Smith envisioned establishing a "city of Zion" on Native American lands near Independence, Missouri. As Smith and his followers moved westward, they gained the following of Sidney Rigdon and his congregation, and built their first temple in Kirtland, Ohio. The Mormons faced resistance in Missouri, as many were perceived to be abolitionists. This political distrust culminated into the 1838 Mormon War, resulting in the expulsion of Mormon adherents from the state of Missouri by an extermination order issued by the Missourian governor.

The church relocated its headquarters from Kirtland to Nauvoo, Illinois where Smith served as the city's mayor and leader of the city's militia, the Nauvoo Legion. Smith developed the concept of "theodemocracy", a form of government which combined elements of theocracy with American republicanism, and instituted the secret practice of plural marriage. He envisioned a Council of Fifty that would recognize him as their leader of a Millenial theodemocratic society. Smith's ideas and power elicited suspicion among the non-Mormon community within Nauvoo, and inspired the Nauvoo Expositor (written by Mormon dissident William Law to publish its one and only issue, which exposed Smith's plans and promotion of plural marriage, expounding the Church to return to its initial principles. Smith and the Nauvoo City Council ordered printing of the paper to cease and to destroy the printing press itself after deeming the operation to be a public nuisance and the contents of the paper to be libelous. The actions of Smith and the city council enraged the public, which ultimately led to Smith facing criminal charges. Smith voluntarily surrendered himself to police authorities in the neighboring town of Carthage, where he and his brother, Hyrum, were held in custody at the town jail. While they awaited trial, an angry mob of approximately 200 participants stormed the jail and killed both men. The death of Joseph and Hyrum Smith caused a succession crisis, as Hyrum, who was the Assistant President of the Church at the time, was originally intended to be Joseph's successor as the President of the Church. In the wake of the Smiths' martyrdom, several contenders claimed succession, including Sidney Rigdon, Brigham Young, and James Strang. 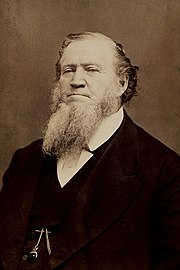 Brigham Young, the second leader of the LDS Church

The succession crisis which followed the deaths of Joseph and Hyrum Smith lasted for six months, during which time, several church leaders contended for the role of President of the Church and the "Prophet, Seer, and Revelator". Initially, it was not clear as to who would lead the church as Joseph Smith's successor. Numerous proposals included offering the leadership to Smith's younger brother, Samuel or one of his sons. Brigham Young emerged as the clear favorite among the majority of the assembled Mormons at a general conference on August 8, 1844 by common consent. Young's case for leadership was that no one could truly replace Joseph Smith and that instead, the Quorum of the Twelve Apostles should exercise authority since it had all the "keys of the priesthood" held by the founder. Sidney Rigdon had claimed that he received a revelation calling him to succeed Smith as the "guardian" of the Church. After Young was selected as the leader, Rigdon dissented and continued to press his case, before he was disfellowshipped by the Twelve Apostles, and later excommunicated in absentia by the Common Council of the Church on September 8, 1844. Similarly, James Strang rejected Young's ascension as leader. Although Strang was a recent convert to Mormonism, he nonetheless held serious legitimacy and popularity among some Mormon followers. He possessed the Letter of appointment, a three-page document which argued that a prophetic successor to Joseph Smith had to be appointed by Joseph Smith, be ordained by angels, receive revelations as Joseph Smith allegedly did, and translate ancient records in the presence of certified witnesses.

Relationship to the Deseret[edit | edit source]

Retrieved from "https://wiki.conworlds.org/w/index.php?title=The_Church_of_Jesus_Christ_of_Latter-day_Saints&oldid=190487"
Categories:
Cookies help us deliver our services. By using our services, you agree to our use of cookies.