Time in the Kingdom of Sierra 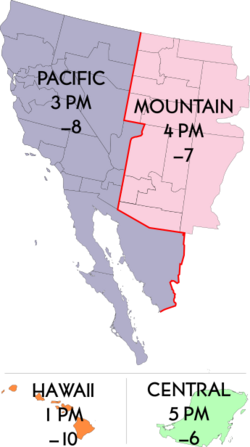 Time in the Kingdom of Sierra is divided into ten standard time zones (ranging from UTC–12:00 to UTC+14:00), with the majority of the Kingdom of Sierra's provinces, states, areas, and territories observing daylight saving time (DST) between late spring and early fall. Although PSAs are free to make laws regarding time zones, official time zone boundaries and DST observance is formally regulated and determined by the K.S. Ministry of Interior. Western Federal Sierra and Bajaría mainly uses the Pacific Standard Time (PST) and Pacific Daylight Savings Time (PDT), while Eastern Federal Sierra, the Deseret, West Colorado, and West New Mexico uses the Mountain Standard Time (MST) and Mountain Daylight Savings Time (MDT). All of the states in Hawaii and several other outlying K.S. Pacific islands observe Hawaii Standard Time (HST) and the Yucatán Peninsula observes Central Standard Time (CST). Daylight savings is generally observed from the last Sunday of March to the last Sunday of October. It is not observed by any of Sierra's territories (except for the portion of Pacífico Norte west of the Colorado River), in the country of Hawaii, and five provinces in Federal Sierra (Cornerstone, Flagstaff, Imperial, Maricopa [eastern half only], and Sonora). The most advanced time zone is in the K.S. territory of the Gilbert and Ellice Islands, which observes UTC+14:00, the world's earliest time zone, as Gilbert and Ellice Standard Time (GST). The least advanced time zone is in the K.S. territory of the Pacific Crown Islands, namely the islands of New Nantucket and Worth Island, which observes UTC–12:00 as the New Nantucket Standard Time (NST).

The official times in the Kingdom of Sierra utilize 133CS atomic clocks which are maintained by two government agencies: the Royal Surveyors Corps (RSC) and the Royal Academy of Standards and Measurements (RASM). The clocks are accurate to 30 billionths a second per year. It is synchronized with other international clocks used around the world under the Coordinated Universal Time system. All times utilized are shown in 24-hour time. RBS airs a daily time signal across its radio service, sending a series of 900 Hz wave tones for about a minute before 12:00 PT. It is broadcast in all of Sierra's nine official languages, and an additional six others across all of its language-variant broadcasts.

Main article: Date and time notation in the Kingdom of Sierra

While the Sierran government officially endorses and promotes the use of the 24-hour clock, the 12-hour clock is the most prevalent form of timekeeping in everyday life including writing, media, computing, transportation, and education. The 24-hour clock is used officially by the government, the military, and scientific organizations, but is seldom used in conversational speech among English speakers, even when reading from 24-hour clock times. Among French-speaking Sierrans and some Spanish-speaking Sierrans (especially those who live in Bajaría), the use of 24-hour time in speech is much more common and preferred.

The Sierran Antarctic Territory officially uses Pacific Standard Time, while Sierran bases stationed in other parts of Antarctica base their time on the closest supply station. For instance, the Ulla Britta Base in the New Zealander Ross Dependency places their time at UTC+12:00, in line with New Zealand's.

Retrieved from "https://wiki.conworlds.org/w/index.php?title=Time_in_the_Kingdom_of_Sierra&oldid=128608"
Categories:
Cookies help us deliver our services. By using our services, you agree to our use of cookies.