Between 2007 and 2010 the 10 ships of the class underwent a process of modernization and upgrade that extended its useful life until at least 2024. After the upgrading process that affected mainly to the propulsion system and the electronic and combat systems, Ula Class submarines are considered one of the quieter and more manoeuvrable subs in the world. The submarine can be hardly detected by enemy surface vessels due to its trimmed profile what makes this kind of submarines ideal for operations in coastal areas. 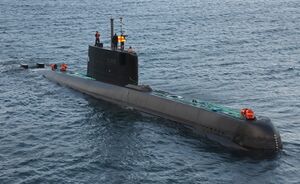 After their mid life upgrade, the 10 ships of the class were equiped with a new propulsion system combining a conventional system consisting of a Saab SCANIA MDU 130 marine diesel engine generator with a lead acid battery and an air independent propulsion (AIP) system, used for silent slow cruising with oxygen and hydrogen storage. The fuel cell system uses 2 NAtech PEM fuel cells each with 220kW.

The diesel generator plant is mounted on a swinging deck platform with double elastic mounts for noise and vibration isolation. The propeller motor is directly coupled to the seven-bladed screwback propeller.

Retrieved from "https://wiki.conworlds.org/w/index.php?title=Ula_Class&oldid=34399"
Categories:
Cookies help us deliver our services. By using our services, you agree to our use of cookies.