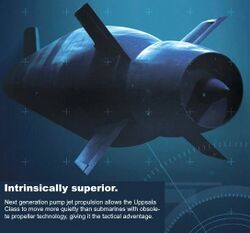 Submarines of the Uppsala Class employ a revolutionary new propulsion system. They are the first submarines in active service to have a mixed system of gas turbine located on the "bulb" on top of the fin, lithium ion batteries and fuel cells. The gas turbines allow them to reach speeds in surface or semi-submerged mode much above those of any other submarine, while the system of batteries and fuel cells endows them with a capacity and endurance surpassed only by some nuclear submarines. This state-of-the-art propulsion system is the result of years of research and collaboration between several companies and provides the Sjøforsvaret with a top underwater capability.

In the center of this innovative system is a 10 MW ASEA permanent magnet motor connected to a NAtech Marine Pump-jet. Permanent magnet propulsion motor technology can replace the reduction gears and significantly reduce the running sound to the lowest possible level, what attached to a Pump-jet makes the submarine one of the quietest in the world.

When operating in the fast transit mode, the boat operates as a semi-submersible with the bulb positioned above the surface. The gas turbines burn hydrogen or natural gas with air inducted through an extendable mast and the energy produced by the gas turbine is used to power the permanent magnet motor and to recharge lithium ion batteries. To avoid risks, the fuel is stored outside the main compartment in tanks located between the outer and the inner hull.

For slow covert transit requirements or on station, the batteries and fuel cells are used in fully Air Independent Propulsion (AIP) mode. Oxygen tanks are located betwenn the outer and the inner hull.

In April 2016, the Navy ordered the construction of 12 new units to replace the Ula Class and provide itself with greater submarine capacity. These new submarines incorporate some improvements in their combat systems as well as a better optimization of the propulsion systems. Throughout the 2020-2024 period, it is expected that all class submarines built in the first phase will be upgraded with these new systems.

Retrieved from "https://wiki.conworlds.org/w/index.php?title=Uppsala_Class&oldid=37934"
Categories:
Cookies help us deliver our services. By using our services, you agree to our use of cookies.