The visa policy of Sierra deals with the policy set by Her Royal Majesty's Government that determines which foreign nationals and non-citizens wishing to enter and remain temporarily in the Kingdom of Sierra, including Sierra, the Deseret, and Hawaii, and how they may be granted permission to do so. Visitors must obtain a visa unless they are a citizen of a country that is exempt from the visa requirements, part of Sierra's Visa Waiver Program, or come from a member state that is part of the Conference of American States' St. Louis Area. Visitors who require a visa generally receive them from one of Sierra's diplomatic missions, or a firm that has been accredited and authorized to issue such visas by the K.S. Ministry of Foreign Affairs. Sierra's national visa policies also apply in the Channel Islands and both of the Los Pacíficos, while every other Sierran territory forms and maintains their own visa policies.

A foreign national wishing to enter the Deseret, Hawaii, Sierra, Pacífico Norte, Pacífico Sur, or the Channel Islands must obtain a visa unless he or she is:

Sierra issues 42 different types of visas, which can be sorted into one of three categories:

Sierra requires any foreign nationals who entered the country with a required visa to leave with in possession of the same visa upon departure. If the foreign national entered using an e-visa, they must provide their unique ID in order to satisfy this requirement. Under certain conditions, those without their visa can be issued one automatically, if necessary. Those who cannot produce a visa and are not granted an exit visa automatically must apply for an exit visa. Should a foreign national overstay the duration of their visa, they must either apply to extend their visa or to obtain an exit visa. Those without an exit visa are interred into a 72-hour period. During this period, they may not leave the country on their own accord until they receive one or provide a valid reason for overextending their stay. After this period has expired, the foreign national may be subject to deportation in violation of immigration and movement law for failure to produce an exit visa, and can be banned from reentry in the future under a blacklist. 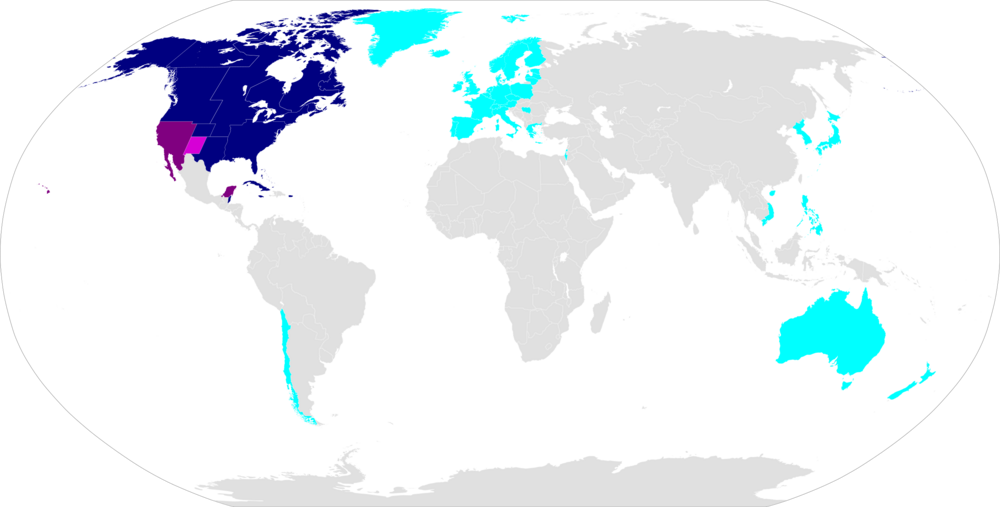 Currently, 37 countries are enrolled in Sierra's Visa Waiver Program. This program exempts citizens from these countries from the Sierran visa requirement upon entry in the Sierran mainland, its territories, and crown dependencies. However, they are still required to obtain an electronic authorization if arriving by air or ship. An electronic authorization is not required for any nationals arriving by air if they are part of a connecting flight or layover that has a destination outside of Sierra, provided they remain at the airport and stay no longer than 72 hours.

Visitors may stay between 45–120 days without a visa, depending on their country's status in the Visa Waiver Program. This includes time spent in other countries within the St. Louis Area if the arrival was through Sierra.

Cancún and Yucatán share the same visa waiver policies as Sierra's but also maintain additional programs with certain countries. All tourists, regardless of nationality from eligible countries, may stay up to 45 days visa-free. The duration of these 45 days include any time spent in the Sierran mainland, other Sierran territories, Central America, Mexico, or any member state of the St. Louis Area if the tourist initially entered through either Cancún or Yucatán.

Citizens of the following countries, linked with Sierra through the Columbia Realms or the Compact of Free Association, do not require a visa to enter, reside, or work indefinitely in Sierra or its territories.

All Conference of American States citizens who have the right of adobe in Sierra but hold citizenship in a non-participating state of the St. Louis Area Agreement do not require visas but must use an enhanced driver's license or passport in order to gain access to Sierra and its territories at all ports of entry. Nationals from these states who enter Sierra through another St. Louis Area member do not require reporting to border control authorities, and may use standard means of identification if necessary. Sierran authorities can still deny entry to or forcibly remove non-St. Louis Area CAS member state nationals under extenuating circumstances however, such as if they pose a serious threat to Sierran public safety (such as criminal ties or drug trafficking).

As of 2018, nationals from the following countries are denied entry on the basis of the 2016 National Security and Counterterrorism Travel Safety Act, which is set to expire on September 1, 2022 which can be renewed:

Retrieved from "https://wiki.conworlds.org/w/index.php?title=Visa_policy_of_Sierra&oldid=18426"
Categories:
Cookies help us deliver our services. By using our services, you agree to our use of cookies.