The current phase of the Pashtun Civil War began in 1997 with the defeat of the Taliban and other Islamic fundamentalist factions by moderate nationalists and the restoration of the Barakzai dynasty in Pashtunistan. Since then, the country has been ruled by an absolute monarchy but a low level insurgency has continued by rebel groups. During the early stage from 1997 to 2001, the government has fought against them on its own and the Taliban seized control of some large cities. In addition to its version of Islamic religion, the "united opposition" led by the Taliban also includes ethnic separatists from the country's large Tajik and Uzbek minorities seeking to liberate themselves from the rule of "Pashto chauvinism." These groups gained momentum during the late 1990s but since 2001 an intervention by foreign powers helped the Pashtun monarchy go on the offensive and retake most territories, in response to the 11 September 2001 terrorist attacks on multiple cities in Anglo-America. As a result, at least 14,000 foreign troops are present in Pashtunistan as of 2019. Since the late 2000s most of the country has remained under government control, with the rebel zones concentrated in the southern provinces around Farrah and Kandahar. The League of Nations estimated that the total deaths since the start of the conflict at 300,000 as of 2014, and an additional 650,000 have been internally displaced by the fighting.

After the victory of the United Front in 1997 and the establishment of a new government under the Barakzai dynasty, the Taliban went underground but reemerged, launching a series of attacks against several cities in 1998. Initially they used guerrilla raids and ambushes in the countryside against government forces, but by 1999 they were threatening to march on Kabul and other major cities. Uprisings by ethnic Tajiks in the centre of the country, led by the Islamic Renaissance Party of Tajikistan, and a rebellion by ethnic Uzbeks under the Islamic Movement of Uzbekistan further complicated the situation. By 2000 it seemed Pashtunistan could split among ethnic lines and the new government would collapse. However, after the 11 September 2001 attacks in the American states led to a foreign intervention, by 2004 the Pashtun Royal Armed Forces with international assistance were able to restore order to much of the country. Since 2014, a branch of the Islamic State of Iraq and the Levant (ISIL), Khorasan Province, has also been operating in the country in addition to the United Opposition. But the Taliban has not cooperated with them.

Starting in the fall of 2018, Pashtun peace talks have been ongoing between the government and the Taliban, also involved Anglo-American and League of Nations diplomats. The details were worked out over the course of ten months, and the final agreement is planned to be announced in the fall of 2019. As result of decreased tensions, the 2019 Pashtun legislative election was held in September of that year with almost no interference from terrorists and is considered the country's most competitive election. Although the deal fell apart due to Pashtun and rebel envoys not being able to reach an agreement and a bombing in late September that killed several Pashtun soldiers, newly appointed Prime Minister Hikmatullah Zain, whose party won on a platform of ending the war, has continued the negotiations. In February 2020, a partial ceasefire was successfully implemented by the Taliban and the CAS and Pashtun government, leading to the signing of a historic peace agreement. 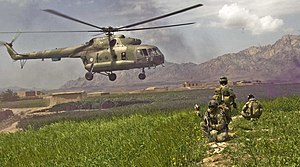 Pashtun commandos trained by Sierran, Brazorian, UC, and NU troops do much of the fighting against the rebels
Retrieved from "https://wiki.conworlds.org/w/index.php?title=War_in_Pashtunistan&oldid=39876"
Categories:
Cookies help us deliver our services. By using our services, you agree to our use of cookies.