Wasatch, officially the Area of Wasatch, is a subnational area of the Deseret, located in the northeastern part of the country. It is the 3rd largest area by total area in the Deseret and the 12th largest PSA in the Kingdom. It is the most populous area in the Deseret and the 20th most populous PSA in the Kingdom. It is bordered by Morganland, New Oneida, and Sweetwater to the north, West Colorado to the east, Emery to the south, and Juab to the west. Its capital and largest city is Salt Lake City, which is also the national capital of the Deseret. It is one of the 37 PSAs of the Kingdom of Sierra which are represented in Parliament.

For several millennia, Wasatch was inhabited by various indigenous groups, including the ancient Puebloans and the Ute. Other Uto-Aztecan groups also lived in the region, which included the Goshute, the Paiute, and the Shoshone. The first Europeans to explore the area were the Spaniards who took part in the Domínguez–Escalante expedition, who traveled into modern-day Wasatch near Utah Lake. Although the Spanish claimed the region for the Spanish crown and made additional explorations, there was no further interest in colonizing the area due to its desert landscape. Wasatch and the rest of the Deseret were later administered as a part of Alta California. During the Mexican-American War, the California Republic claimed the region as its territory. At around the same time, Mormon pioneers, who were escaping persecution from the United States, settled in Salt Lake Valley, establishing the first non-native settlements there. Under the leadership of Brigham Young, the population rose from an initial few thouand to hundreds of thousands by the 1860s. Conflict erupted between Mormons and anti-Mormons, particularly, the Canaanites, resulting in the Canaanite-Mormon War. The war resulted in the Mormons remaining concentrated in Wasatch and around the Great Salt Lake, while the Canaanites were scattered to the south and north. The Mormons, initially hoping to establish a U.S. state, established the Deseret Republic, which was an unrecognized sovereign state that maintained de facto independence until 1884 during the Deseret War when the Deseret was captured by the Sierran government, and the Mormon leadership surrendered. The Deseret Organic Act established Sierran-sanctioned autonomy within the region and Wasatch was initially established as a statistical area.

The majority of Wasatch's residents are Mormons and members of The Church of Jesus Christ of Latter-day Saints. Salt Lake City is home to the Church's headquarters and the Salt Lake Valley is considered the heart of the Mormon Corridor. The Church has significant influence over the area's politics, culture, and daily life, and remains one of the most Mormon polities in the world, with over 90% of its population being members. In accordance to LDS teaching and the Deseret's autonomous nature, Wasatch is one of the few PSAs in the Kingdom to prohibit the consumption and sale of alcohol, as well as coffee, tea, and other caffeinated beverages. Due to the Church's promotion of vegetarianism, it is one of the only PSAs to impose a meat tax.

The economy of Wasatch is the largest in the Deseret and the third largest in Eastern Sierra. Major industries include mining, ranching, government services, education, petroleum, and technology. The defense industry is also an important sector in the Wasatch, housing numerous military bases and testing sites. In contemporary Wasatcher history, the area has moved towards diversifying its economy to include financial services, bioengineering, pharmaceuticals, and telecommunications.

Wasatch (/ˈ w ɑː s æ tʃ / WAH-satch) is named after the Wasatch Range, a mountain range which extends from the New Oneida–Morganland border to south of Wasatch in Emery, and lies north of Salt Lake City, where the majority of the area's population inhabits. The Wasatch Range itself was named based on the Ute word Wasatch which means "mountain pass" or "low pass over high range". It has been hypothesized that the mountains themselves were named for a Shoshoni leader who had the Shoshoni name wasattsi which translates to "blue heron".

Wasatch's geography is famously known for its extremely mountainous and rugged terrain. It rests on one of the highest average elevations in the Deseret and the entire Kingdom as it sits between three major, distinct geological regions of the Deseret: the Great Basin, the Rocky Mountains, and the Colorado Plateau.

Wasatch has a total area of 16,848 square miles (43,636 km2). It borders six other PSATs: Morganland to the north and west; New Oneida, and Sweetwater to the north; West Colorado to the east; Juab to the west and south; and Emery to the south.

The Wasatch Range is a prominent mountain range which runs through western Wasatch in a north–south orientation. On average, the mountainous terrain and valleys can fluctuate between 4,330 feet (1,320 m) to over 11,000 feet (3,400 m). Prominent mountains in this range include Mount Nebo (11,933 ft; 3,637 m) and Mount Timpanagos (11,753 ft; 3,582 m). The northernmost part of the Wasatch Range is defined by a series of valleys, with the western slopes of the range dropping sharply into the Wasatch Front valleys, while the eastern slopes decline more gradually. The Cottonwoods is an area of rugged terrain just east of the Wasatch Range near Salt Lake City and includes the Synderville Basin. North of this are the Wellsville Mountains, which define part of the boundaries between Wasatch and Morganland. The region between the eastern side of the range near Salt Lake City and the Bear River Mountains in Morganland are generally the gentlest sections of the area. 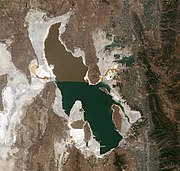 View of Great Salt Lake from space, with western Wasatch to the east of the lake. The color difference on the lake is caused by physical separation of the lake by the Lucin Cutoff, a railroad causeway, leading to different levels of salinity on both sides of it.

The Great Salt Lake is the largest body of water in Wasatch and its eastern shoreline defines the majority of Wasatch's western borders. It is the Northern Hemisphere's largest salt water lake and the eight-largest terminal lake in the world. It is replenished naturally from the Jordan, Weber, and Bear rivers, as well as other streams, which deposit roughly 1.1 million tons of minerals into the lake annually. As an endorheic lake, the lake features highly saline waters, exceeding that of the world ocean. The lake is large enough to influence local climate, with its warm waters causing lake-effect snowfalls in the surrounding area. Cold winds originating from the north, west, and northwest blow over the lake during cold fronts, triggering a temperature difference between the warm waters and the cold air that contributes to downwind precipitation.

The largest freshwater lake in Wasatch is Utah Lake, which sits at the basin of Utah Valley. Both Utah Lake and Great Salt Lake are remnants of a much larger lake known as Lake Bonneville which existed during the Pleistocene. The Utah Valley lies at the southern end of the Wasatch Front, and is separated from Salt Lake Valley by the Traverse Mountains, an east–trending range that delineates the boundaries between the Salt Lake and Provo segments of the geologically active Wasatch Fault.

To the east of the Wasatch Range are the Uinta Mountains which sweep across Wasatch from New Oneida and Sweetwater in an east–west direction. Similar to the Wasatch Range, the Uinta Mountains are a subrange of the Rocky Mountains and are notable for being one of the highest mountain ranges on the North American continent which follow a mostly east–west direction. It contains the highest peak in all of Wasatch and the Deseret, Kings Peak, at 13,528 ft (4,123 m).

East of the Wasatch Range and south of the Uinta Mountains is the Uinta Basin, itself part of the larger Colorado Plateau. This area constitutes the majority of eastern Wasatch. The structural basin is a semi-arid desert region which features local creeks and rivers, including the Duchesne and Green rivers, both of which ultimately feed into the Colorado River further south. The basin sits between 5,000 to 10,000 feet (1,500 to 3,000 m) above sea level. Adjacent to this basin is a strip of sharply steep plateau immediately south of the basin, which then descends towards 3,000 feet (900 m) towards the Roan and Book Cliffs in Emery.

Wasatch's government is divided into three branches: executive, legislative, and judicial. The government is structured and based on the Wasatch Basic Law, which serves as the area's constitution. The powers and scope of the government are limited by the national government, which limits the extent of self-government in comparison to PSAs in the other constituent countries of the Kingdom of Sierra. Like other Deseretian areas, it is only permitted to create legislation and adjudicate matters of the law which have been expressly allowed by the Constitution of the Deseret or the Council of Fifty.

Retrieved from "https://wiki.conworlds.org/w/index.php?title=Wasatch&oldid=70429"
Categories:
Cookies help us deliver our services. By using our services, you agree to our use of cookies.