The Zealand Class is a ship class of four Landing Helicopter Dock (LHD) ships built for the Sjøforsvaret. They are the strategic projection ships of the Sjøforsvaret and are designed to operate in a miltirole way as aircraft platform and amphibious assault platform.

In 2005 FLOSK aproved a projet to build 2 Landing Helicopter Platforms to support the aircraft and amphibious capabilities of the Sjøforsvaret. The design contract was awarded to a consortium formed by Aker Yards, Saab and Navantia. It is based on the Navantia design for the Spanish Navy.

In June 2006, FLOSK ordered the construction of 2 new ships to the consortium. Currently 4 ships are in service.

The Zealand Class LHD is a multipurpose vessel that can be used as an aircraft carrier as well as for amphibious and relief operations. The Zealand Class has a reinforced hull with icebreaking capabilities.

As an aircraft carrier, Zealand Class has a 236 m-long and 36 m-wide flight deck with a 12° sky-jump facility for VSTOL aircraft as Harrier II. Apart from Harrier II a large variety of helicopters can be operated from the vessel. The hangar can accommodate up to 24 aircraft, while 12 aircraft can be parked on the flight deck. The ship has two elevators, with a capacity to carry bigger aircraft in the future. The vessel's displacement for air operations is 30,678 t and maximum sustained speed is 31kt.

The ship has a dock of 74 m length and 20 m width. Her flooding deck can carry up to six LCMs & LCACs and a number of LVTs. Displacement of the LHD for amphibious operations is 32,700 t, while the maximum sustained speed is 29 kt.

The Zealand Class ships are capable of transporting 212 containers as well as evacuated civilians. It has two operation theatres, a dentist's room, a sick bay, a consulting room, a first aid room, an ICU, an injury selection area, an X-ray room, a lab and a chemist's room. An elevator connects the dock, flight deck and cargo decks to the hospital to transport invalid personnel.

The Sjøforsvaret will deploy the vessel jointly with the SJF Marineinfanteriet and the Hæren. The Zealand class has a 2,000 m² heavy vehicle garage for 60 Leopard type tanks. The light vehicles garage is next to the aircraft hangar, in an area of up to 3,000 m².

The power plant of the ship has been completely redesigned to suit the needs and requirements of the Sjøforsvaret and the new systems and elements of the ship. FLOSK chose to equip the ship with a mixed multi-gas turbine and fuel cell propulsion system (COFCAG) developed jointly by NAtech and Volvo Aero. Main fuel for which the system has been designed is hydrogen, but the system can also work with natural gas, methane and other gases, although with a lower energy efficiency. At low speed and during maneuvers the system uses the power delivered by the fuel cells, using the gas turbine system to achieve higher speeds. In addition, the system reuses the exhaust gases to supercharge the turbine and for the ship's heating systems, which considerably reduces the ship's thermal footprint. Power plant of the ship was designed taking into account the current needs of energy for propulsion and other systems on board, so it was possible to assume an increase in power required if new equipment or systems were installed in the future.

The propulsion system is fully electrical with four AZIPOD s (ASEA azimut thrusters) mounted externally to the main hull. The electricity for the motors is supplied by the power system. 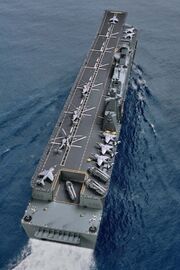 In the amphibious role the ship can carry up to 15 aircrafts, that can reach 40 in the aircraft carrier role. The aircrafts suitables to be operated are:

The ships are named after islands of the are of Jylland.

Retrieved from "https://wiki.conworlds.org/w/index.php?title=Zealand_Class&oldid=34688"
Categories:
Cookies help us deliver our services. By using our services, you agree to our use of cookies.